The Elfin Lakes Trail starts near Squamish close to the spectacular Sea to Sky Highway. It's a 22km return hike to the Elfin shelter and it's not too arduous if you decide to split it over 2 days like we did.

However, our journey wasn't as stress free as we would have liked. Adverse conditions, coupled with our naivety, made for some moments of hilarity, which at the time did not seem funny at all.

When we arrived at the shelter we were relieved that we were not alone in our experiences. In fact quite a few other members of the hut had made the same laborious journey.

Being able to relate to other backcountry explorers like this made it easy to make friends. What made it so difficult you may wonder? Keep on reading and I will tell you all about it!

* If you are looking for useful information on doing this hike in the Winter/Spring scroll to the bottom of the post.

Being Too Cool for School

Having slept in our van at the trailhead, 20 km north east of Squamish, My partner and I woke up early, after a peaceful nights sleep, ready to hit the trail.

It was the end of May and we had been told by the visitor information centre in town that there was still a lot of snow on the Elfin Lakes trail.  Even up to three metres in places!

We were also told that it was impossible to get to the Elfin Lakes shelter, our destination for the day, without snowshoes and/or ski touring equipment. After mulling it over for all of about 2 minutes we decided to do it without either.

Our reasoning was that it was just after May long weekend and we knew the hut had been fully booked for the last few days. It meant the trail had recently been completed by a bunch of people and would therefore be packed.  Hopefully, we wouldn’t be sinking 3 metres into the snow, we thought to ourselves.

We have learned at the visitor information centre, that the Diamond Head Trail Parking Lot was notorious for break ins and crime. We were road tripping for the summer and everything we owned was in our van, therefore we couldn’t afford to lose anything.

After searching high and low for somewhere to store our valuables in Squamish a solution came from one of the most unlikely places. We were chatting with the librarian about our situation and she kindly offered to keep our laptops, passports and most importantly hard drives with all our photos from recent travels, at her house!!!

Never underestimate the kindness of strangers, especially Canadian strangers. If you’re reading this Nancy then thanks again!

After some granola, a banana and some last minute packing we started out on the trail. We were slightly worried that a few people had left before us all wearing snowshoes but we, being defiant and bold (and mostly stubborn) decided to try anyway.

After all this wasn't our first hike in the snow. Just a month earlier I have hiked up Ha Ling Peak in Canmore for sunrise. When we first set foot on the snow we quickly realized that we were right. Relief flooded our veins as the trail was so packed it was like concrete.

The snowshoers who had decided on their footwear before even seeing the snow, were now looking very foolish as they struggled unnecessarily up hill. 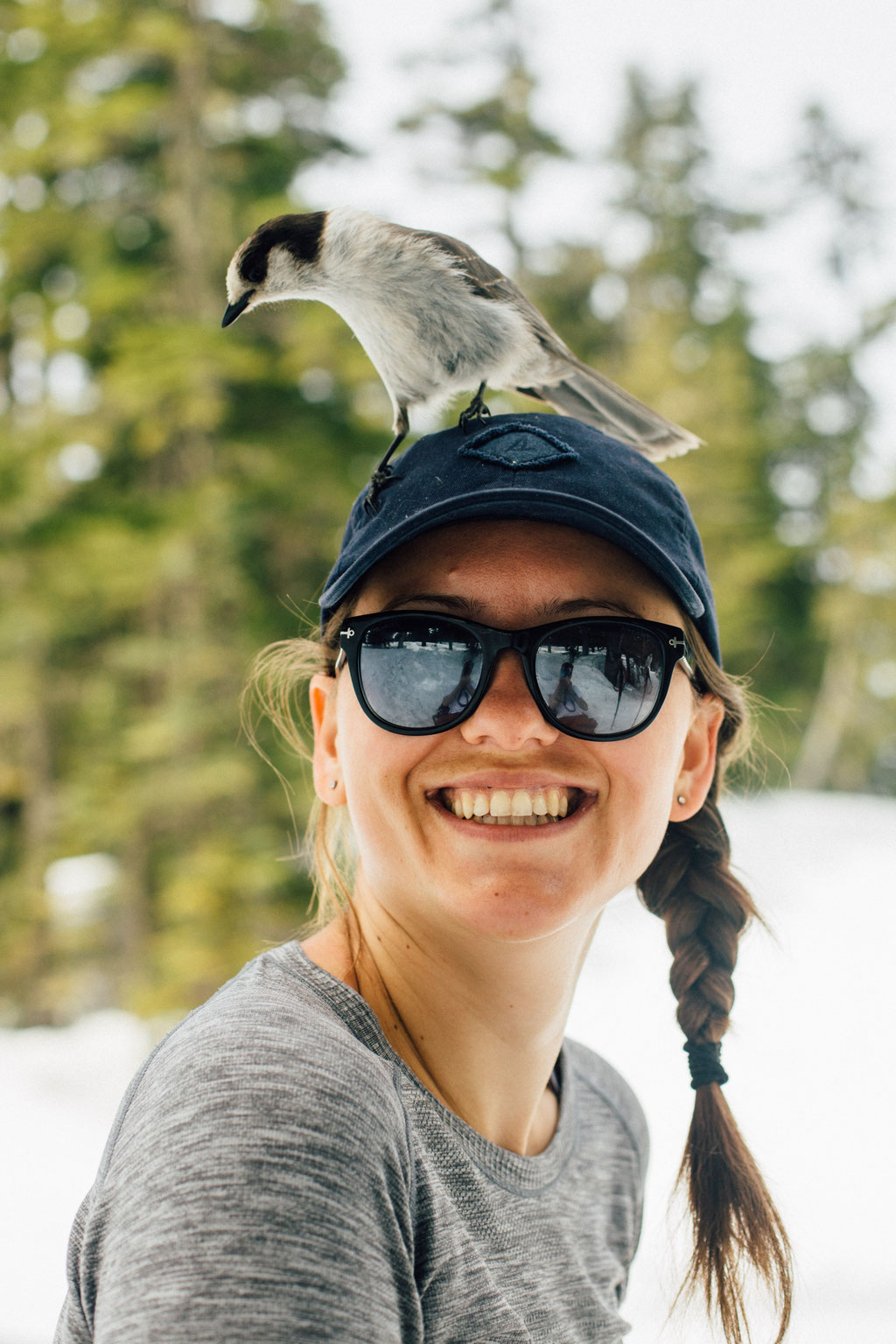 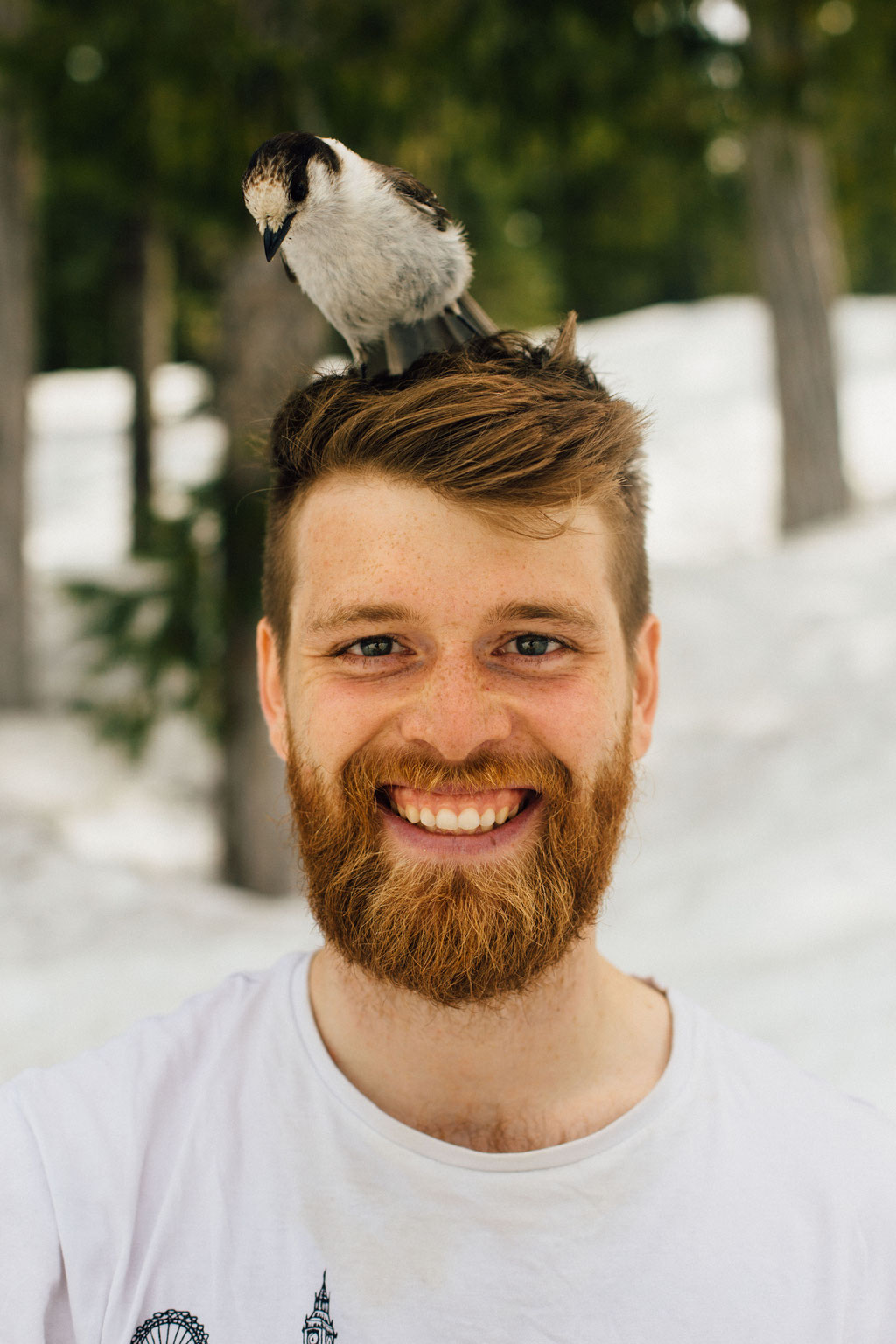 The first half of the trail is along an old service road that leads the first 5km to the the Red Heather Hut. It’s a slightly up hill gradual climb and didn’t take us very long.

On our first of many snack breaks we were interrupted by two beautiful Grey Jays, or Whiskey Jacks as they are more commonly known. They were playful and not afraid of human interaction even though we knew, that playing was the last thing on their minds.  All they wanted was to scavenge our crumbs.

Unfortunately, after a while they started pecking at our empty hands and that was when we realized, we weren’t the Disney princesses we thought we were, but mere caterers to these cheeky varmints.

The Reversing of the Roles

After passing the first hut, the trail steepens until it reaches its highest point, it then follows the undulating Paul’s Ridge which offers incredible views of Mount Atwell.  Although we didn’t see any, this part of Garibaldi National Park has the highest concentration of black bears so keep an eye out for them if you decide to go!

Paul’s ridge was the highlight of this entire hike for me, but we couldn’t dillydally. Every moment the sun beat down onto the snow the top crust layer was becoming more and more slushy. With every passing step the chances of us dropping waist deep into the snow were increasing.

As fast as we could walk, the inevitable began to happen. We started post holing through extremely wet snow, down the ridge line, to the shelter that lay only a mere few kilometres away.

These last few kilometres were horrible, the foolish snowshoers didn’t look so foolish now and quite honestly the roles at the start of the trail had been reversed. It was us who were the smug idiots in the beginning, later turning into the bitter hikers, struggling with every step.

Staying in the Elfin Lakes Shelter

After not talking for a while, because neither of us could think of a nice word to say, we saw the shelter in the distance. It looked so much smaller than all the photos I had seen of it, but I thought it must be the one, as there’s nothing else around here.

No lakes were to be seen, which again made me question whether we had already made it to our final destination or will have to keep going.

After arriving we realized that the hut looked so small because the entire bottom level was completely covered on all sides with snow and people were walking out of the second story straight onto the “ten million tonnes of white b***shit” Jack so eloquently described it as. I could tell he was over hiking in the slushy snow.

Similarly to the hut, the lakes were also covered by at least 3 metres of snow and we could only roughly estimate where they were.

Down on the “ground” level was dark as the snow completely covered all the windows but as you walked up the stairs into the 33 bed dormitory the brightness was overwhelming.

Even though getting to the Elfin lakes shelter took us less than 4 hours, my boyfriend, who didn’t take any sunglasses with him, spent almost a week recovering from snow blindness. Since we were one of the first ones to get to the shelter on that day we quickly secured bottom bunks and decided to check out the small venue.

Upon emerging on the balcony I witnessed what was undoubtedly the most Canadian scene ever, people playing with a Frisbee in shorts and t-shirts whilst drinking cans of Alexander Keith’s beer.

It’s not that it was particularly cold, it was 25°C outside, so the t-shirts and shorts were completely understandable, but something in my European brain didn’t quite add up. Crazy Canucks. 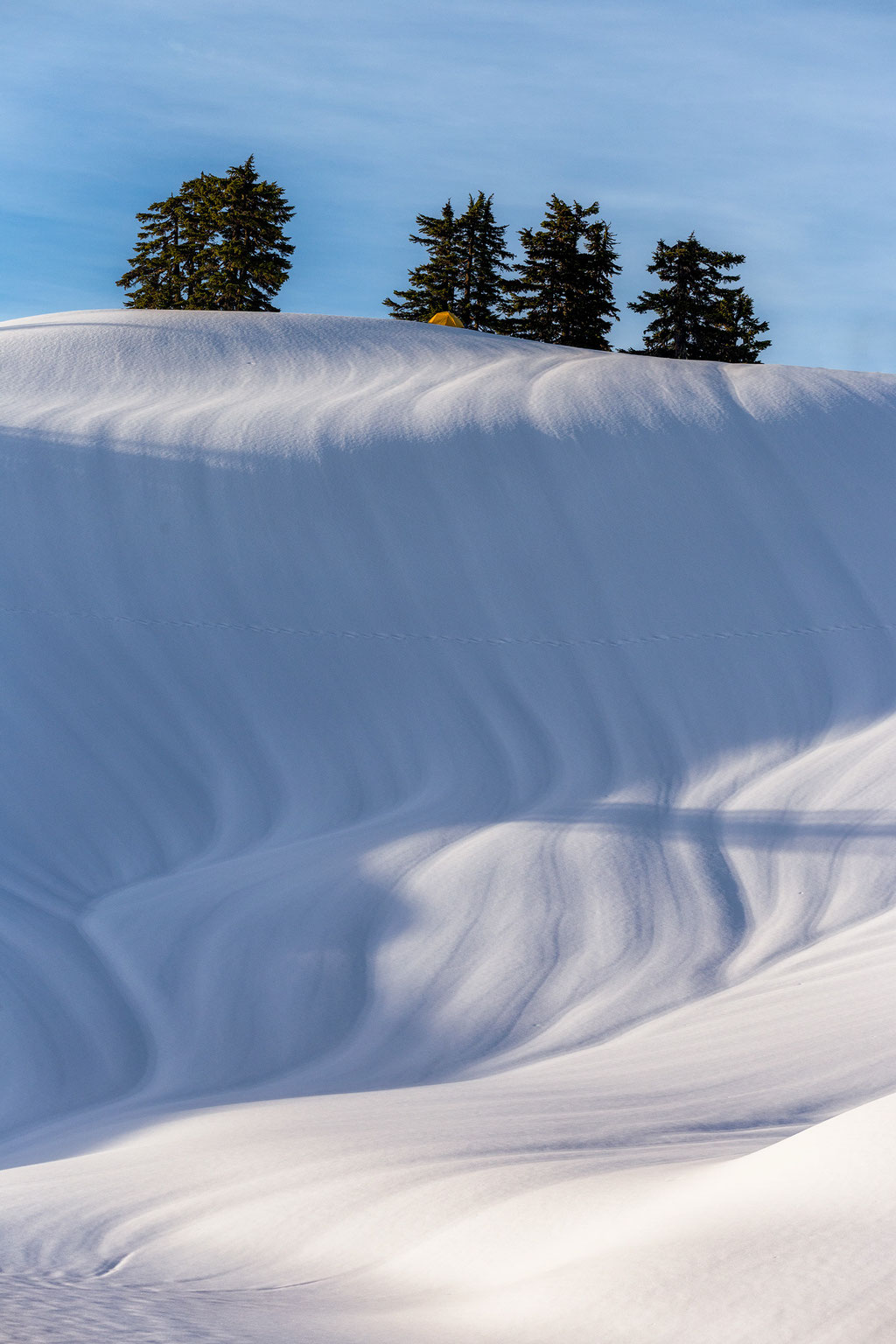 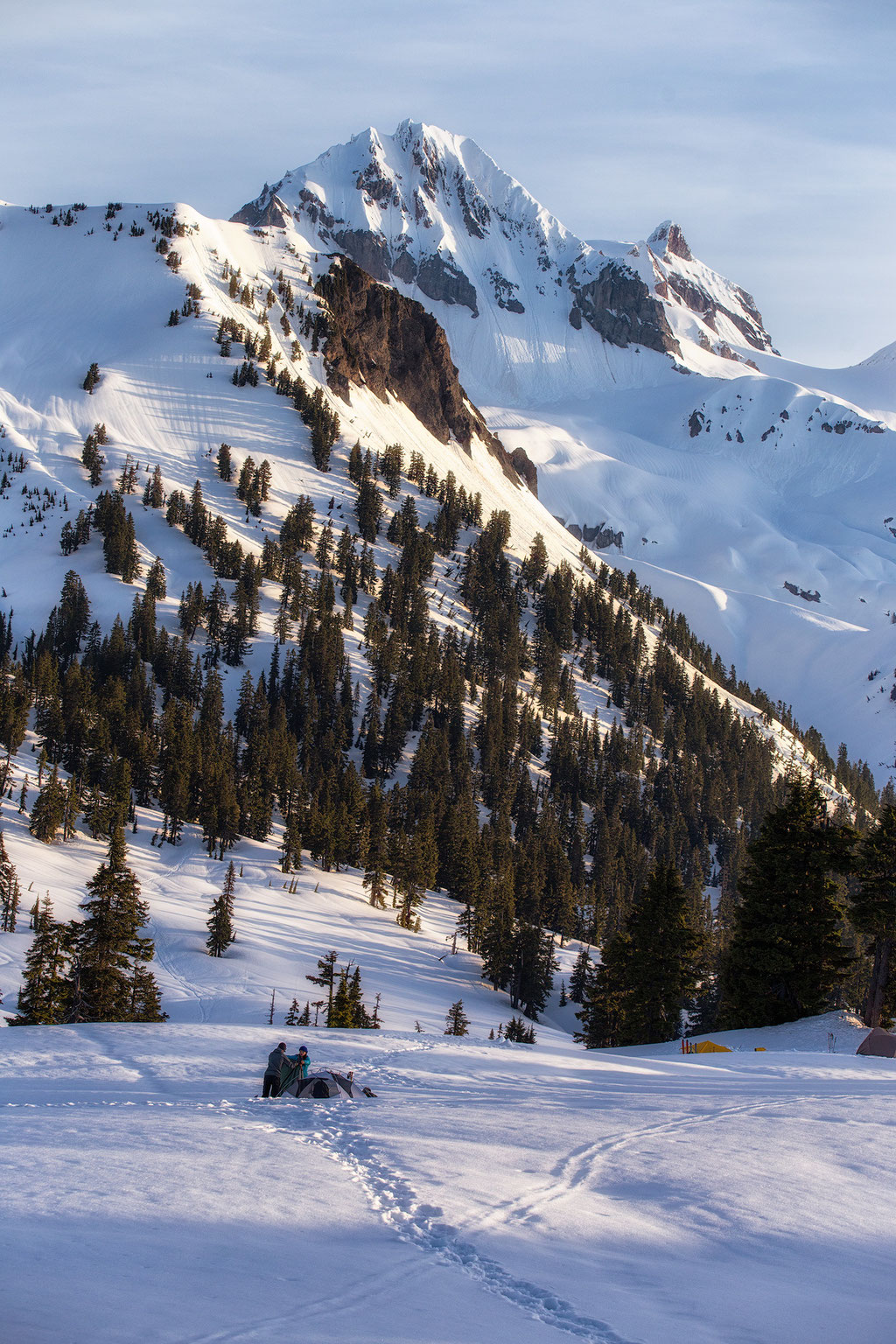 After pouring what must have been at least a pint of water out of each shoe, I left my soaking footwear (and socks) in the sun in the hope that they would dry at least a little bit overnight. But not before long the urge to play Frisbee was too strong.

Squelching around the place like a drunk pirate who had just walked the plank I threw a white Frisbee in a world of snow, the results were inconsistent at best, but fun was had and friends were made.

As more and more people arrived I was glad we were one of the first to get there and secured ourselves a bottom bunk. As the evening wound on, everyone in the hut decided on an early night sleep. However not as much was had as we all would have wanted.

There was a snorer in our midst! I think snorer is such a polite word when the roaring snort of what sounded like a drunk rhinoceros spread eagled on his back was igniting the fire of a thousand suns within me, and many other sleep deprived backcountry explorers. After a few relatively civil words with said snorer and one incessant rustler a somewhat peaceful night was had, before the 5am alarm clocks started chiming.

All of a sudden the idea of carrying a tent next time didn't seem so bad. I was very jealous of all those people who decided to stay in tents as opposed to the shelter. They looked so picturesque dotted around the place, not to mention the silence encapsulated them, as opposed to the chaos created by the 20+ people in the shelter.

Even though the previous day was very warm and today was predicted to be close to 30°C, at night the temperature plummeted to nearly freezing. After a hard boiled egg and a slice of bread we embarked on our return journey at ca 6am.

Once again the snow hardened overnight and the trail was pretty packed. Older and wiser this time, we knew it wouldn’t last long. We tried to get out as quickly as possible, squelching our inevitably wet boots as fast as our tired legs would allow them.

After an hour we were at the top of Paul’s Ridge and then slid down the hill toward the Red Heather Hut, where we were again greeted by the resident whiskey jacks begging for food with their serene harmonies.

After a short break we soldiered on with what was probably trench foot by now and were finally close to the car park. This last bit being all downhill was super easy.

Shortly before we emerged, what some would say victorious, we came across a group of hikers in converse and jeans. Unbeknownst to them we warned them and told them about our previous days naivety and that the trail would get a lot worse, especially in the strong afternoon sun.

Head strong, just like we were on the first day, they didn’t heed to our advice and continued on top of the false security of the mornings snow crust.

Eventually we were at the car. Our “waterproof” boots were soon taken off and bags unpacked and we were on our way to get our valuables.

Although we weren’t prepared for the amount of snow that still lingered on the the trail at the end of May, we still had a great time. Elfin Lakes trail is a beautiful hike, but if we were going to repeat it, we would do it in the summer, when the trail is clear of snow and the actual lakes emerge from beneath few feet of snow!

If you have any questions or more tips don't forget to leave a comment below! Don't like hiking in the snow? Check out Taryn's post about snow free spring hikes around Vancouver.