Standing on mountain summits during sunrises and sunsets are some of my favourite life experiences.

Sadly to get there for this time means either hiking at unsociable hours or bivouacking in sub zero temperatures and as I get older both of these options seem less appealing with each year passing.

When I found out about the Capanna Fassa refuge located right on the summit of Piz Boè - the highest peak in the Sella Group in the Italian  Dolomites I knew I had to stay there overnight.

Staying in a cozy hut, without having have to drag a few kilos of gear to the top and sipping wine on the terrace with 360 degree views of the Dolomites is hard to say no to. Millions of stars above your head for a fraction of a price of any hotel in the valleys below.

Hiking To The Summit Of Piz Boè in the Italian Dolomites

Where is the Piz Boè Located?

The Sella massif is mostly known amongst ski enthusiasts. During the winter time it’s possible to ski around it using the chain of lifts forming what’s known as Sella Ronda.

There are at least half a dozen different routes to the summit of Piz Boè and you can study them all with the help of the Tabacco Map no. 05.  Today however I will cover the quickest and the easiest route to the summit which starts at the top of the Pordoi Cable Car station.

The Fassa valley is one of the most famous dolomiti summer destinations offering access to countless trails and via ferratas in the nearby Rosengarten Nature Park, Marmolada, Sassolungo and Sella groups.

Canazei and Campitello di Fassa are two popular towns amongst tourists visiting the area and if you would like to be close to the action, I would highly recommend booking at least a couple of nights around here.

Below you can find some of my hotel recommendations for the area. If you would like to support my site please use the links below to book your stay (even if you choose different hotels to the ones recommend by me).

Because of the high altitude, the hiking window for the Piz Boè summit is even shorter than the regular hiking season in the Dolomites, which usually lasts from mid-June until mid-October.

If you are planning to hike to the summit of Piz Boè you will need to plan your trip between the end of June and the end of September. I have hiked it in mid-September and as you can see from the pictures the top was already covered in a fresh blanket of snow, at times knee deep.

If you go within a two week period on either side of these months you risk running into icy and possibly dangerous conditions. If there is one thing I have learnt from the many years I spent in the mountains is to never underestimate the power of nature. 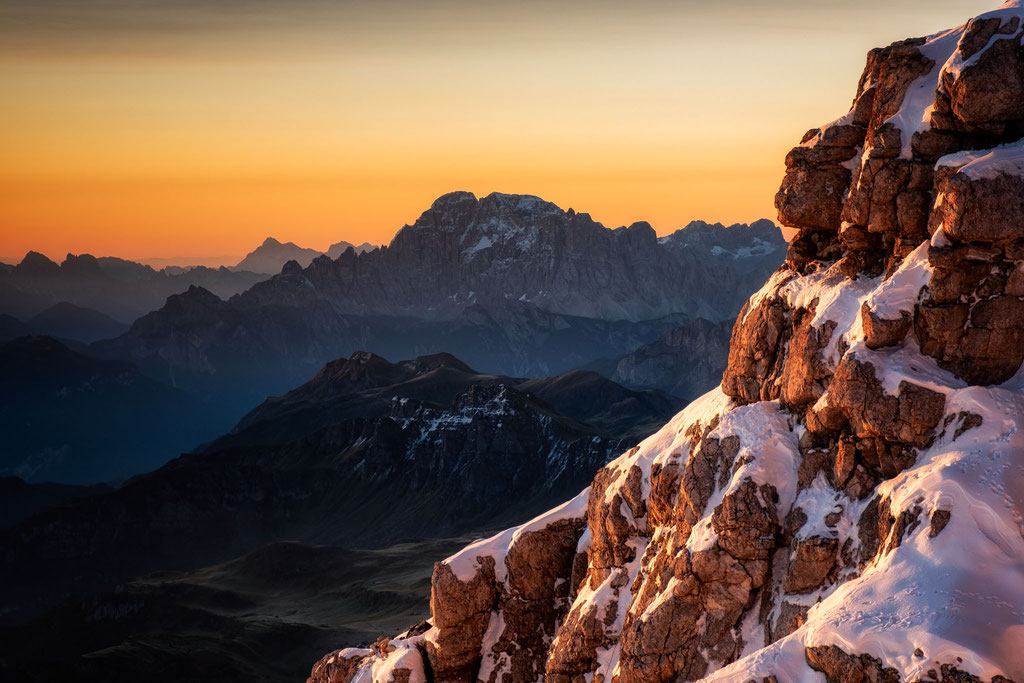 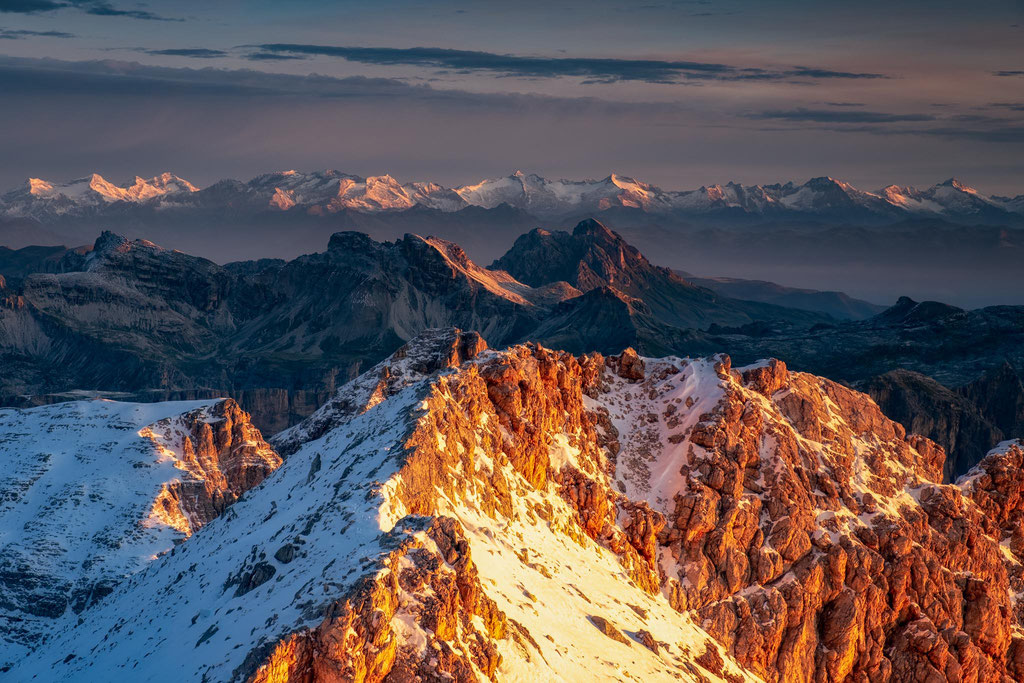 Getting to the trailhead

The quickest way to reach the summit is by starting your hike at the top of the Sass Pordoi Cable car station.

The Cable car leaves from Passo Pordoi, one of the most scenic driveable mountain passes in the Dolomites. There is a big parking lot near the cable car station where you can park your car free of charge. Bear in mind when travelling during peak season (August) to arrive early as the area does get very busy.

You can find the current opening times and prices for the Sass Pordoi cable car on the official tourism website of Val di Fassa.

Even though at times demanding the route is quite straight forward. In favourable weather conditions the summit and the Capanna Fassa refuge can be seen from the top of the cable car station.

Starting at Sas de Pordoi (2936 m.a.s.l) the route first follows path no. 627A and drops down a hundred meters in elevation to rifugio Forcella del Pordoi, built right on the saddle.

From the saddle continue on path 627 for the next 15 minutes before reaching a fork and starting the ascent on path no. 638 all the way to the summit following the standard red and white marks painted on rocks. 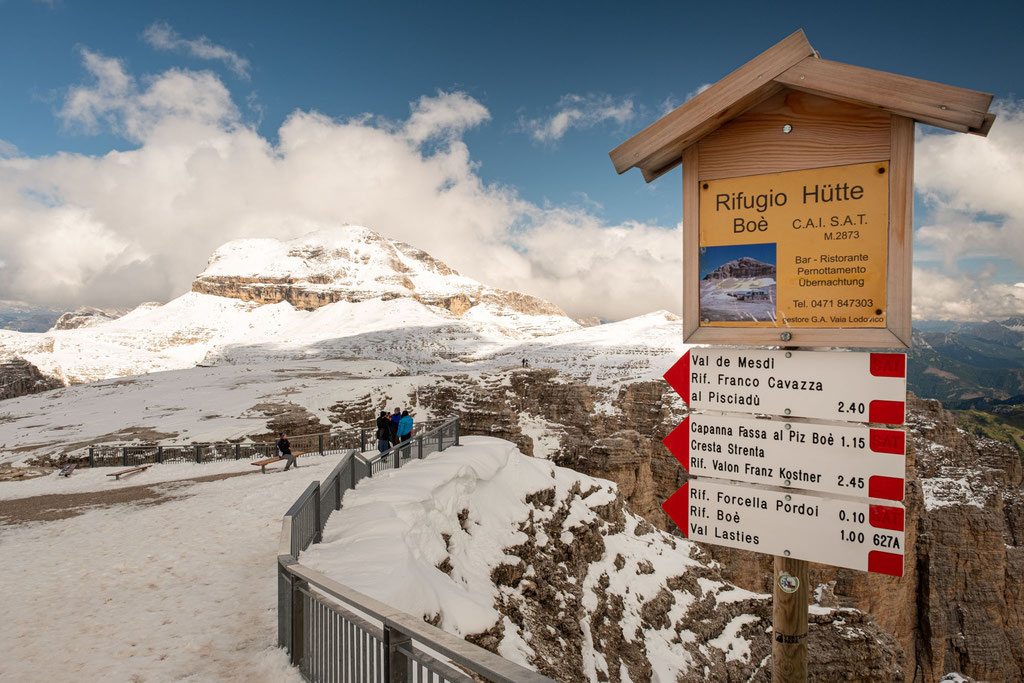 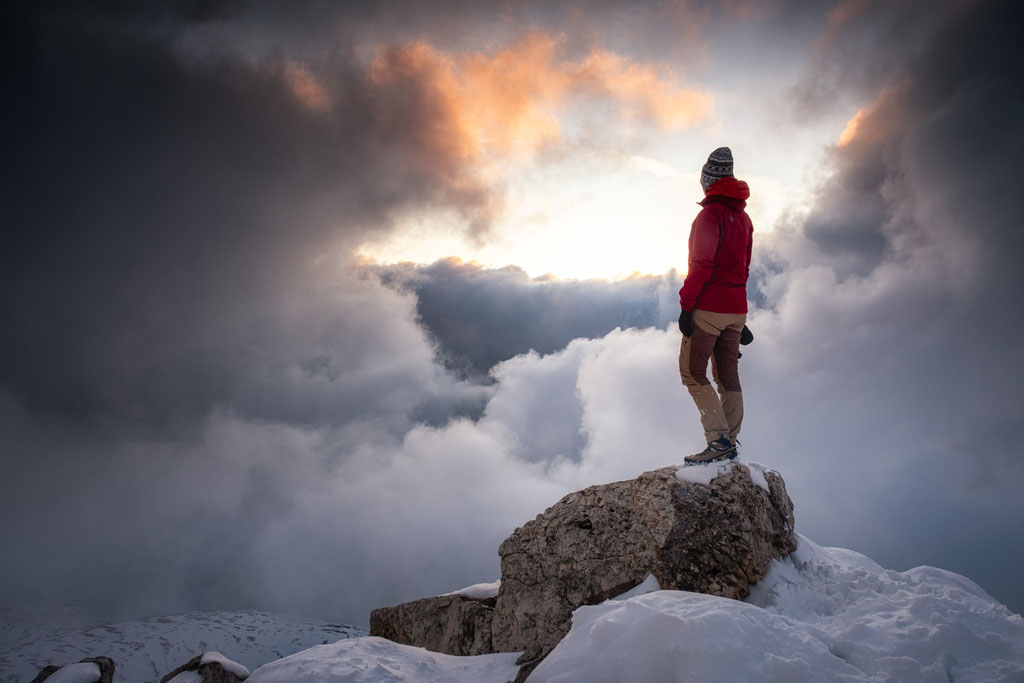 The are a few cable protected sections on the steepest parts of the path, but not challenging enough to class them as via ferrata.

If you are fit you can reach the summit within 1 hour from leaving the cable car, but there is no need to rush! Make sure to allocate at least 90 minutes to two hours to be able to take loads of photos on the ascent.

The descent is either the same way as the ascent or alternatively you can hike down on path 638 to rifugio Boè located 300 vertical meters below the summit then take the path 627 back to the cable car.

A Tabacco Map 05 will help you visualise the route. 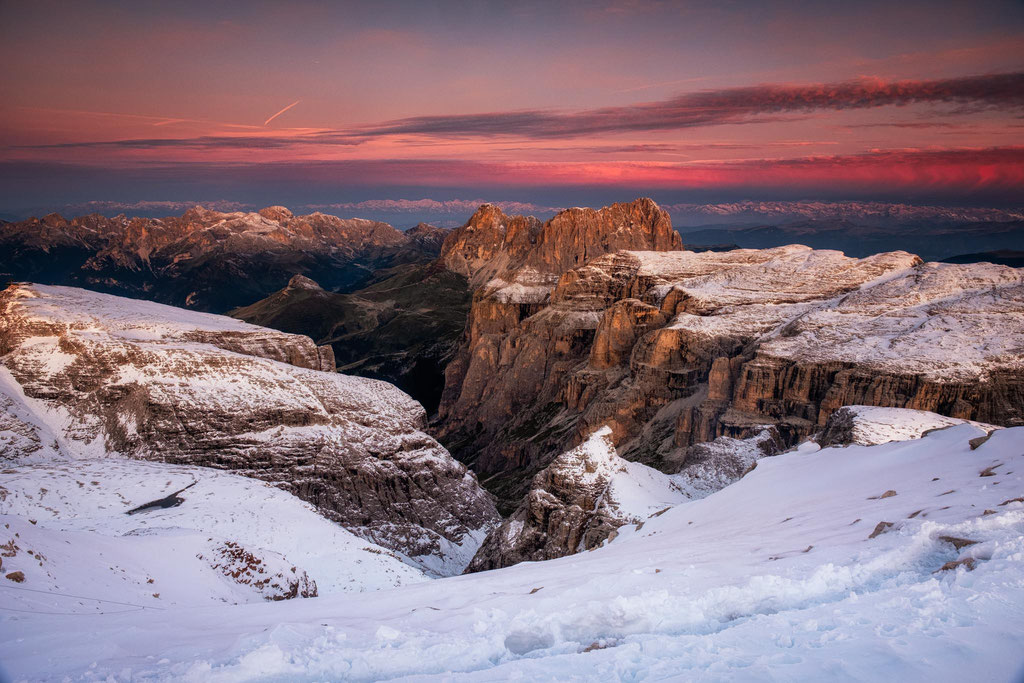 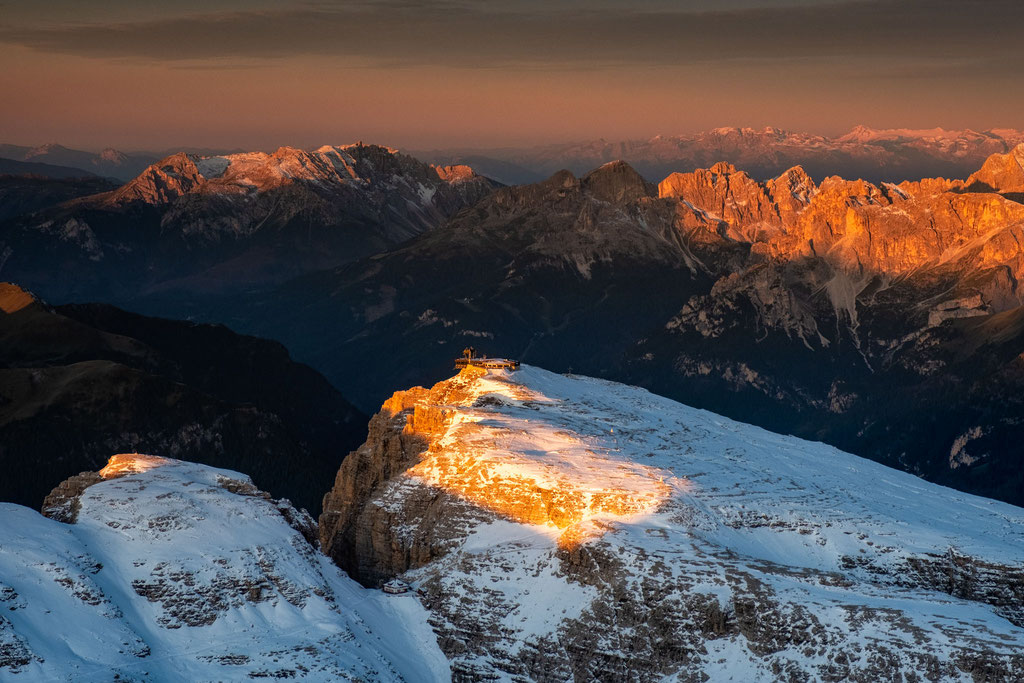 The Capanna Fassa hut is quite unique thanks to the location it was built on. The only higher refuge in the Dolomites is the Capanna Punta Penia on the Dolomite’s highest peak – Marmolada, but the latter lacks in facilities and charm when compared to the first one.

The construction of the Capanna Fassa hut began in 1963 but it wasn’t until 1980 when it was expanded and became what it is today.

Nowadays it offers a total of 22 beds and it stays open from the end of June until the last week of September. 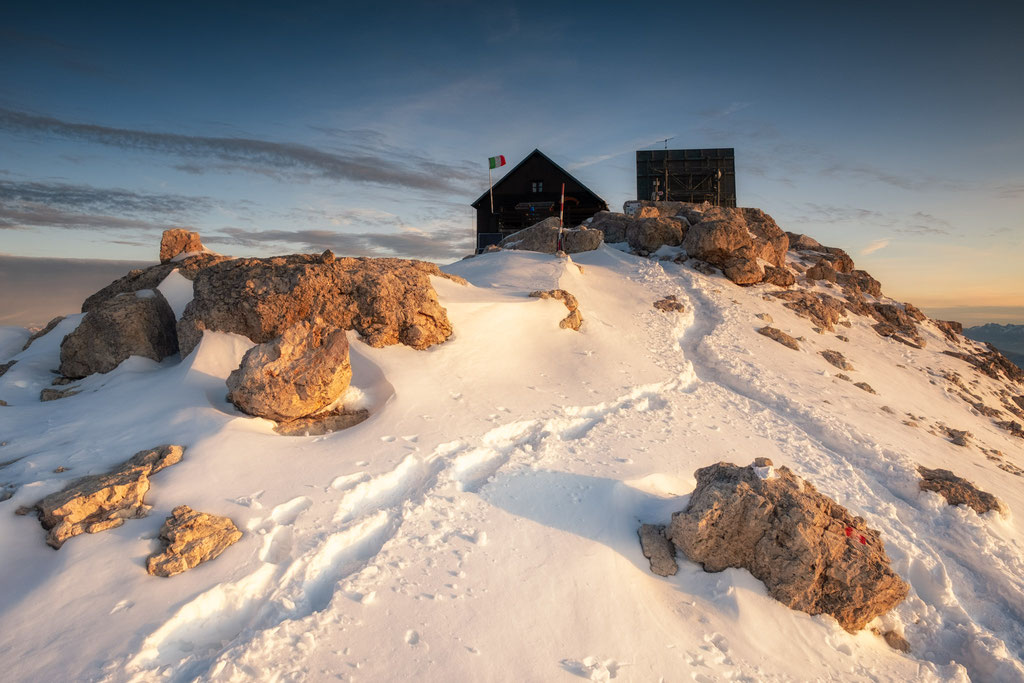 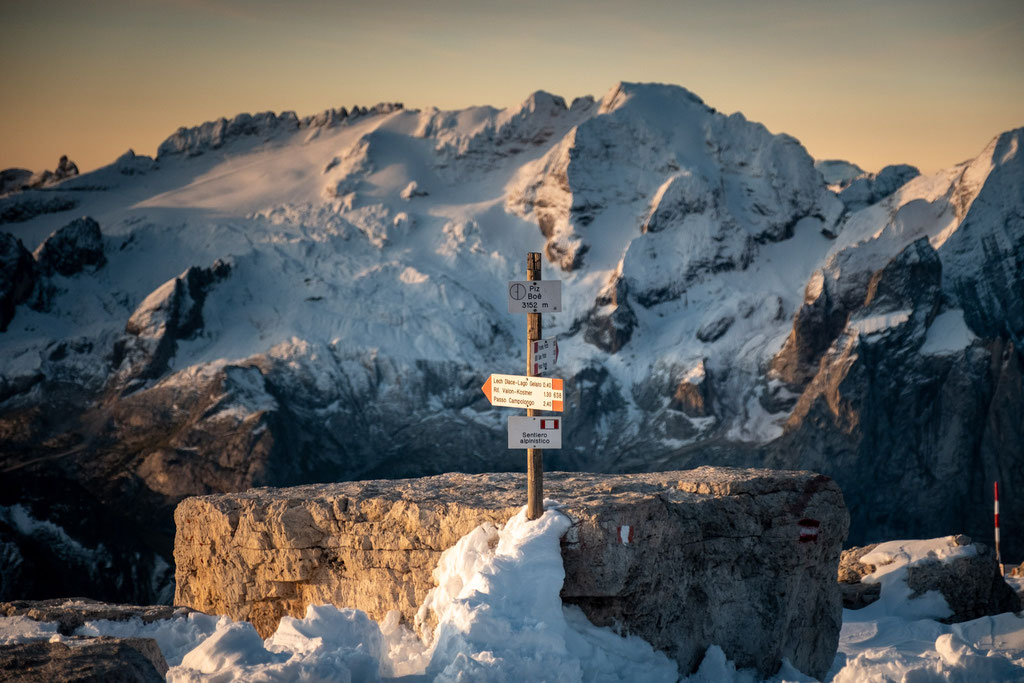 How to make a reservation at the rifugio Capanna Fassa

Reservations can be made year-round by either sending an email or telephoning. There is usually at least one staff member who speaks English and can assist international tourists.

It costs only 30 Euro for an overnight stay with breakfast or 50 Euro for halfboard. If you would like to know more about the ins and outs of staying in a hut in the Dolomites, including the meaning of halfboard, visit the link to my other article. 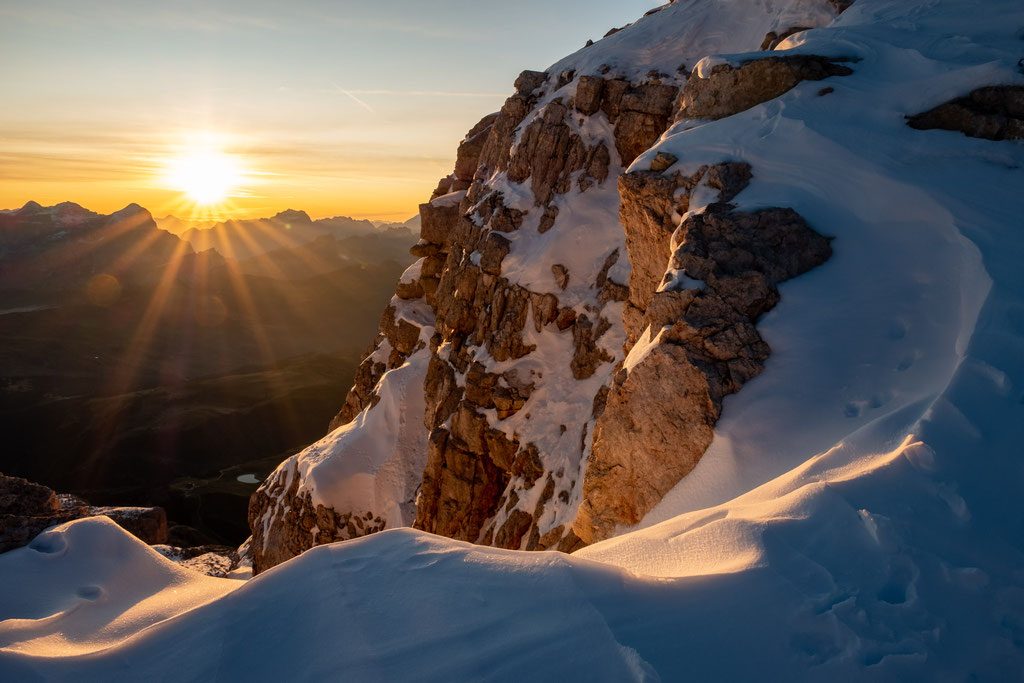 Even though you can reach the summit of Piz Boè and get back down within 2-3 hours, personally I couldn’t recommend enough staying overnight at the Capanna Fassa hut. The pictures which I captured during my stay there are some of my favourites from my time in the Italian Dolomites.

For more inspiration for planning your active holidays in the Dolomites visit my guide, where you can find over 60 articles on photography, hiking, via ferrata and road trip itineraries. It will be your best resource, I promise!

More outdoor adventures in the Dolomites