Pocaterra Ridge is an 11km (7 mile) relocation hike in Kananaskis Country. In theory, for keen hikers like me, the short distance and the mere 500m elevation gain to the first peak should have been, literally and figuratively, a walk in the Alberta park.

In the colloquially known June monsoon, when the eastern slopes of the Canadian Rockies get the most amount of rain, my partner and I were over the moon when we saw a 24 hour weather window that predicted nothing but clear skies.

Not taking any chances we checked with multiple meteorology websites all of which concluded that perfect conditions were on the way.

With such a simple hike and what we thought is going to be ideal weather conditions how did our hike turn out to be so mentally and physically testing? Because the mountains can be treacherous and throw tantrums at you, whenever, and wherever, they please.

Set on camping at the first peak, we started the hike along the Pocaterra Ridge in the late afternoon. From the southern trail head located at the Highwood Pass - the highest paved road, and one of the most scenic roads in all of Canada, we were expecting to make it to the top with enough time to set up the camp and find a composition for a great photo.

With high spirits and a bag full of camping and photography gear we started the hike. It was around 6pm, exactly when the weather window was predicted to begin, and looking up at sky, the clouds that had been looming in the valleys for the entire day, were finally dispersing.

The first few kilometres of the trail undulates through a forest, where we sung songs and made lots of noise. We’d seen a grizzly frolicking in a meadow of dandelions on the drive to the trailhead and knew that there may be more in the area.

Bog hopping and snow dodging our way through the forest we uneventfully emerged on the other side of the forest, where we were met with the much anticipated crossing of the avalanche path.

Looking at the slopes to the south of us we quickly determined that there was no avalanche danger, as it had already released and lay low on valley slopes. Annoyingly exactly where we had to traverse. 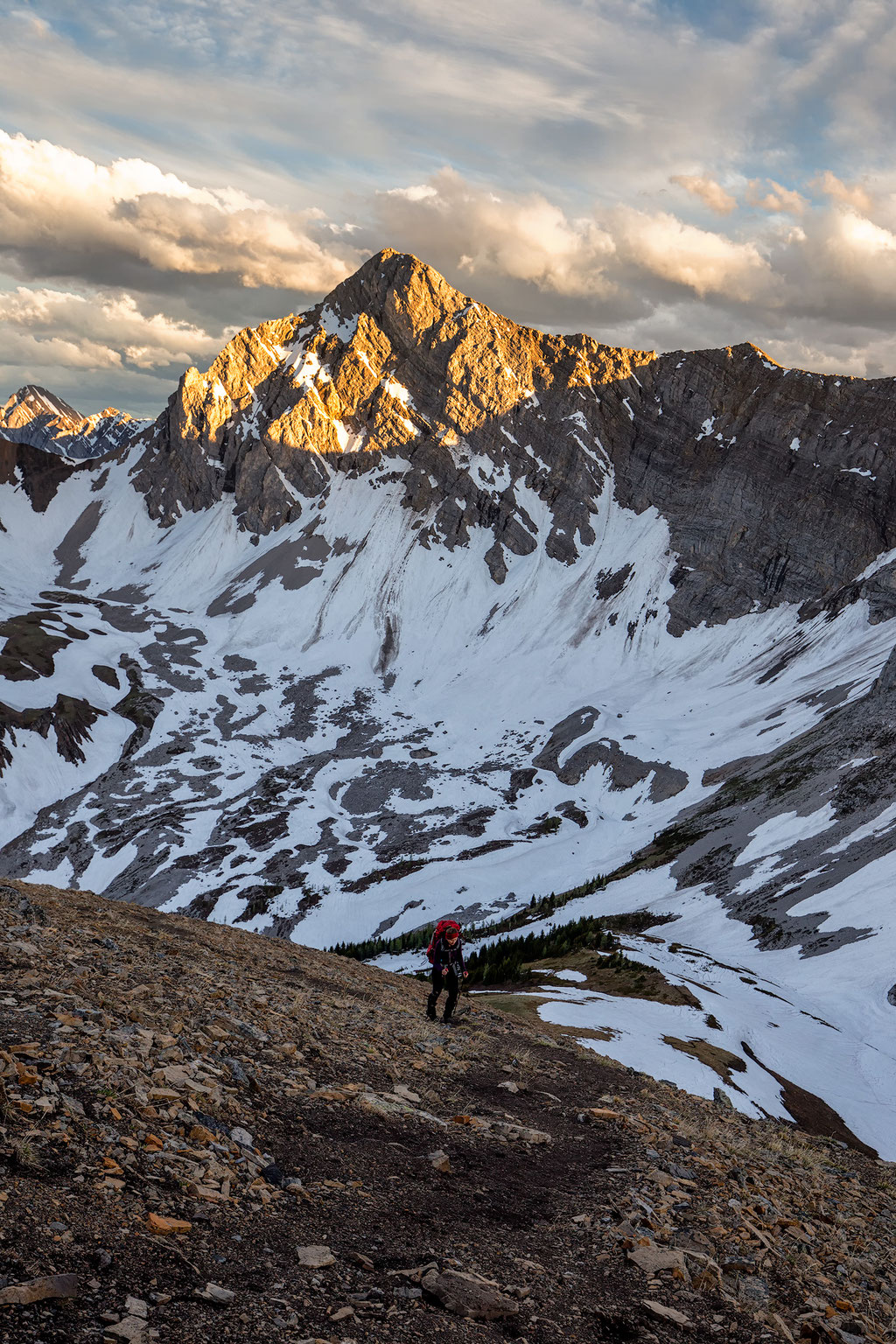 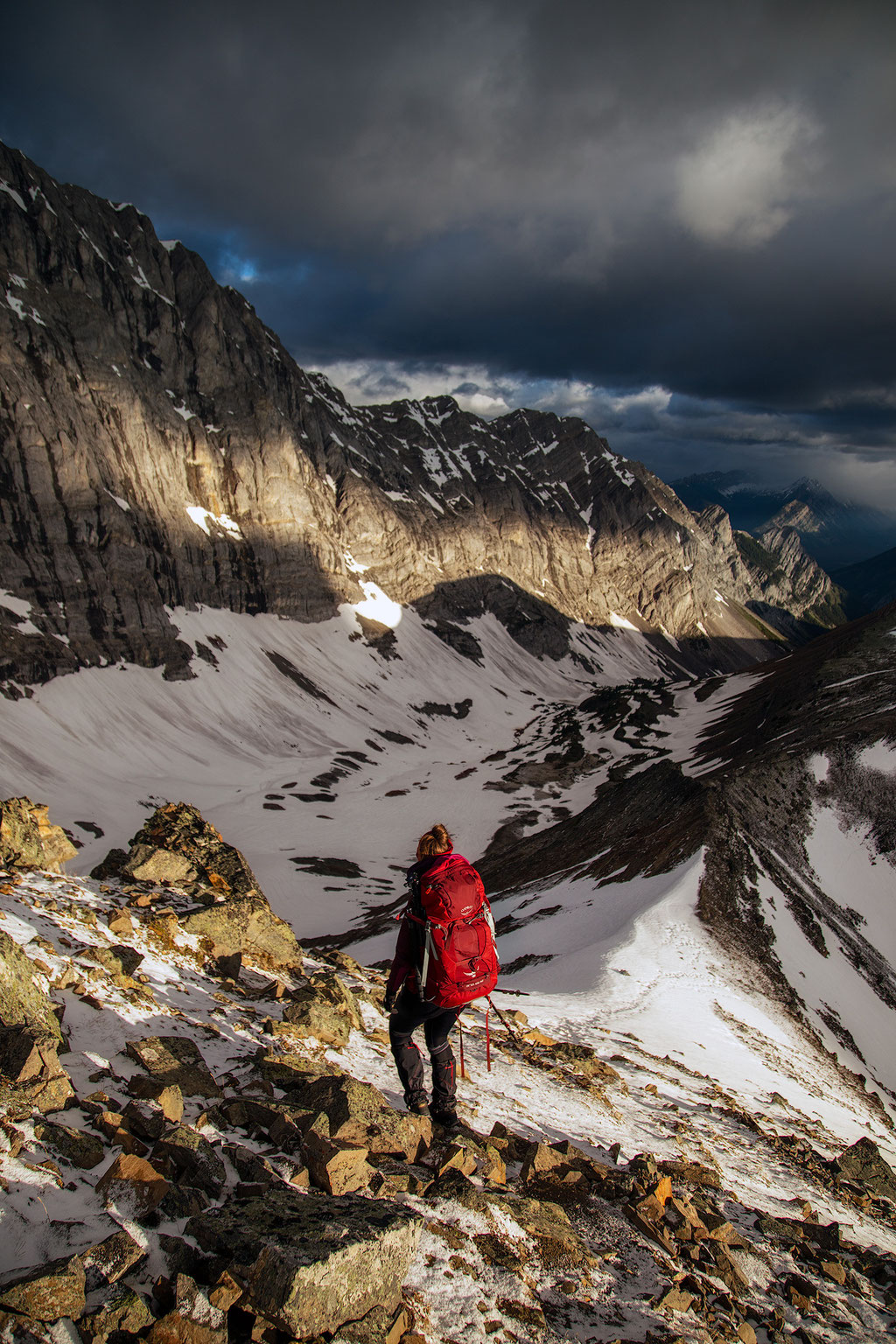 We made the decision to hike up hill and go above the remains of what must have been a truly earth moving avalanche and we were quickly looking down on it from our vantage point. The smell of fresh pine was rife as hundreds of trees had been snapped by the colossal barrage of heavy snow. It was quite something.

Advancing forward, as the valley narrowed, we could no longer remain above the snow-line and had to continue on the white façade of solid ground. Our first few steps were the worst. Sinking first ankle, then knee, then thigh deep into the slush, but the further we endeavoured the snow seemed to become more supportive and soon we were standing without problems on top of the avalanche debris.

Progressing now with only the occasional crust break, that would send us waist deep, we moved much quicker and soon we were at the end of the valley, ready for the snow free ascent along the southern slopes of the Pocaterra Ridge.

But first, we had to cross the stream. We hadn’t really factored it into our plans when leaving the recommended trail a few kilometres back. Further downstream from where we were, there was probably either a bridge or a point where it was thin enough to delicately gazelle over (as one does when carrying a 15 kg backpack;) but at this stage we had gone too far.

There was no way we were heading back through the snow to look for it. We found some footsteps in the snow where another brave soul had crossed and decided, that it was the most adequate place to negotiate the rivulet.

I graciously let my boyfriend go first. Standing on the snowbank, where waters ran 50cm deep underneath, his jump had to take him around 2m. As soon as he took one foot off the ground to start his leap the other remaining foot broke through the snow and plunged into the brook.

I watched, trying not to laugh, as ice cold snow melt poured into his boot but he quickly regained his composure and with one more hop he was on the other side. My turn.

After watching what happened to him I decided to shed some pounds and tossed my pack to him on the other side. Using the same spot of snow that he had packed down for me I jumped without breaking through and made it to the other side. Dry, and in one piece.

We had been hiking for around 2.5 hours at this point and quickly deduced that the last 1km had taken us around one hour. Something that in ideal, snow free trail conditions, should have taken 15 minutes.

We started our ascent, squelching 25% of our time through the steep grassy alpine meadows dodging the patches of wildflowers that were just sprouting. After a short time switch backing, we made it back to the path and were on the way to the summit.

We had to hurry as the sun was setting and we were losing the last of the light. A calf burning 30 minutes later we were at the top, but to our dismay, the suggested tent pad complete with a rock windbreak wall was filled with a few metres of snow.

We searched for a better spot and eventually had to settle for one on the widest, but not flattest, part of the ridge. Like 1.5 metres wide. It was like setting up a tent on the surface of a möbius strip. Not ideal but we didn’t have another option.

After snapping few shots, we decided it was time for a cereal bar and bed. We had an early morning start the next day. Whilst trying to get comfy and thinking about the hourly cost of visiting a chiropractor, we started to feel some strong gusts of wind and the pitter patter of raindrops on the outer shell of the tent. Investigating I stuck my head out. There was a monstrous huge black cloud heading straight overhead that seemed to go on forever.

As the conditions got worse we did start to question our lifestyle choices. Why do we do this? Why don’t we just have ‘normal’ 9-5 mon-fri office jobs, 2.4 children, a mortgage on a small apartment and a dog named Fido?

By this time 50, 60, 70 km/h gusts of wind were crashing into our tent and what we thought initially was rain turned out to be hail stones ever increasing in size. We knew our tent would be ok, it's stood up to the test many times before, including the tempestuous weather on our road trip around Iceland.

Holding the precariously erected tent up with our feet, we didn’t sleep until the storm subsided around 3.30am. Our alarms were set for 5am.

Not really sure if I slept or not, I was awoken by the sound of silence. Although still cloudy, there was no rain or much wind the following morning and after a beautiful sunrise, a cereal bar, some sugary fruit treats and some nuts, we were packed up and ready to descend. 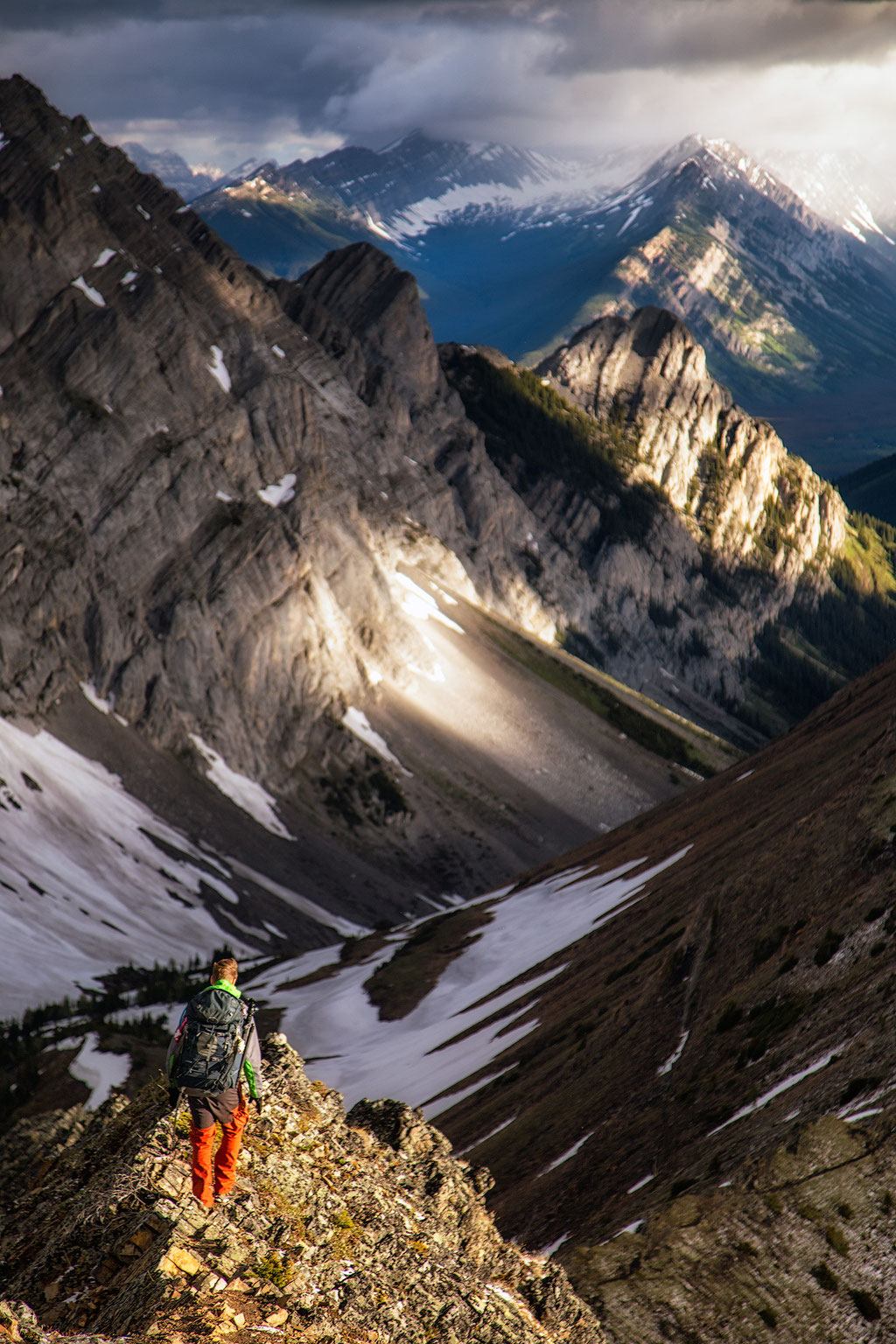 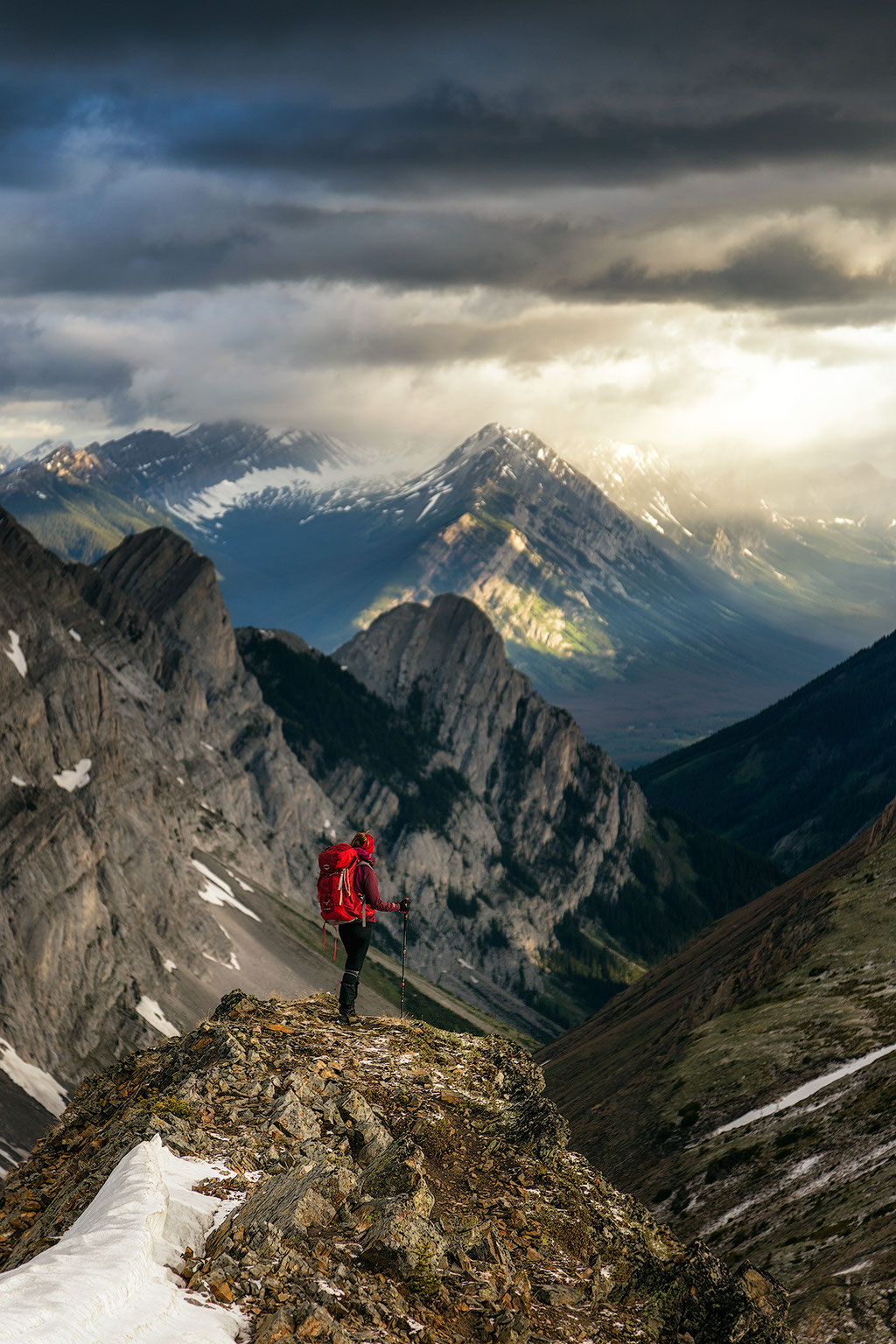 The ridgeline is of unfathomable beauty and at times it reminded me of the rugged highlands in Iceland. Minus the jagged peaks. The hike is best done from south to north, starting at the Highwood pass and ending at the Little Highwood Pass. You can then quickly hitchhike back to your car.

This way the views are always in front of you instead of being behind you. It was a tough walk out across some patchy areas of snow and we could see localized rain storms in the nearby Elbow, Sheep and Spray valleys.

The path, now very easy to follow, along the ridgeline was briskly being undertaken, until the inevitable happened. We saw one of the localized squalls forming overhead. A dark cloud that quickly burst our dreams of a nice walk.

The sharp sting of being pelted by BB sized hailstones was a torture I wish upon nobody.  The wind, that had resurrected, made me want to cry.  Thankfully it was all short lived. No more than 15 minutes.

Back within the safety of the tree line at this point, coming to the end of the hike, just a few more simple river crossings stood in between us and the final destination. We made it over no problem and gloriously got to the northern trailhead and just, as if by magic, the sun came out, the clouds dispersed and the wind died down.

It was as if Mother Nature was torturing us, entropy was infinitesimally close to infinity and universal sum of all chaos was ubiquitous and palpable. Next time I go to New Zealand I’m going to squash the butterfly that caused this.

After hitching a ride from a friendly Canadian, back to our van, that was parked at the Highwood Pass, we were soon driving away from what had been a very testing but very picturesque night in the mountains.

Looking back at the experience and the unique photos we were able to capture I would do it again in a heartbeat. I’d just consider doing a sacrificial offering to Pacha Mama beforehand.

Have you had any troubling experiences in the mountains?

Information and tips for hiking the Pocaterra Ridge

Start the hike at the Highwood Pass and work your way back north to Little Highwood Pass, then hitchhike back to your car. Hitchhiking is easy! Please note that this section of the road is closed between December 1st and June 15th.

Don't go before mid July. I have done this hike in late June and there was still a lot of snow on the trail, making it difficult to follow. August and September will be the optimal months.

Carry bear spray. Kananaskis country is a prime grizzly bear habitat. With that said don't let bearanoia get the best of you! Chances are you won't run into one, but it is always better to be safe than sorry.

Pocaterra ridge is an unofficial hike, but that shouldn't stop you from popping into the visitor centre near the Kananaskis lakes first before hiking it. They will be able to provide you with current trail conditions, wildlife sightings and potential hazards.

Allow at least 5 hours. If you are fast you can complete it in less time, but what's the rush? There are plenty of jaw dropping views along the ridgeline, so make sure to stop frequently and take it all in!

More on Trekking in the Canadian Rockies