If you want a unique view of the famous Three Peaks (Tre Cime), unobscured by the crowds they attract, then via ferrata De Luca/Innerkofler should spark your interest.

Connecting rifugio Locatelli and Forcella Lavaredo, this via ferrata is the perfect answer to those seeking challenge in the mountains, beyond hiking trails.

This route encompasses not just a physical challenge but also mental stimulation in the fascinating remnants of several World War 1 outposts.

Via Ferrata De Luca: The Stats

3-4 hours (not including the initial approach)

Via Ferrata De Luca - Innerkofler In The Italian Dolomites

Getting to the start of the via ferrata De Luca/Innerkofler

The fastest approach to rifugio Locatelli, where the via ferrata starts, is along path 101 running from rifugio Auronzo. This path is a part of the Tre Cime circuit day hike.

The Auronzo hut is accessible by car via a private toll road. It isn't cheap (30 Euro/car, 45 Euro/campervan) and the control gate where you can purchase your pass is one kilometer past lake Antorno, on the way to the rifugio.

To cut the cost you can catch a bus from either Misurina or Cortina D'Ampezzo, the two nearest towns, or the bus stop directly near lake Antorno, opposite the only building (a hotel) you can find nearby. The return trip for a bus costs only 8 Euros and runs regularly throughout the day in the summer season.

It then takes ca 1-1,5 hours to walk from rifugio Auronzo to rifugio Locatelli. 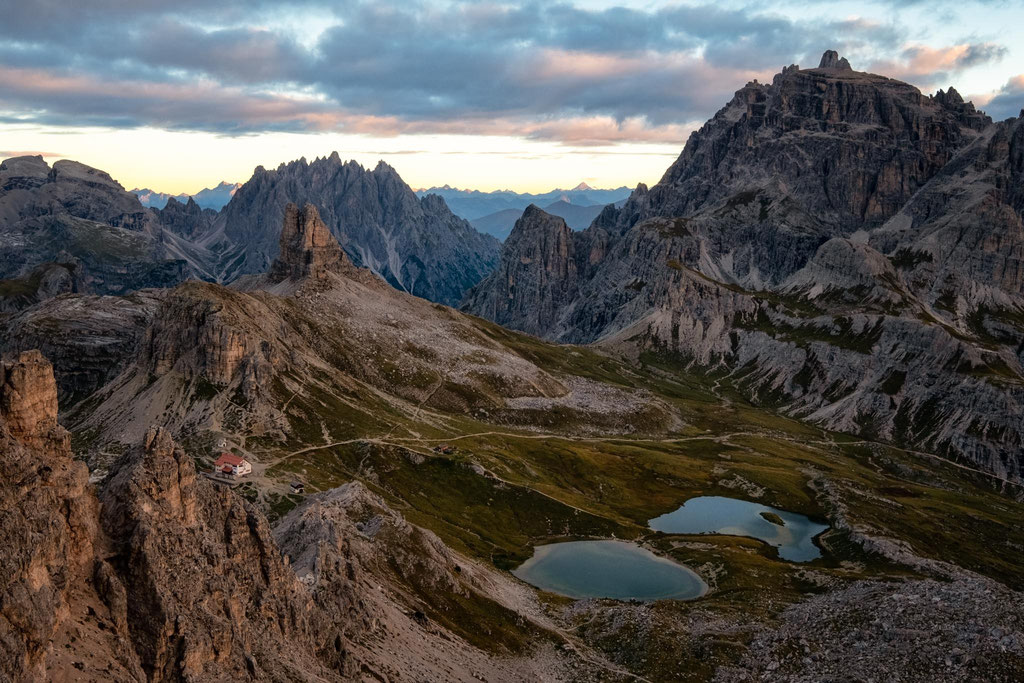 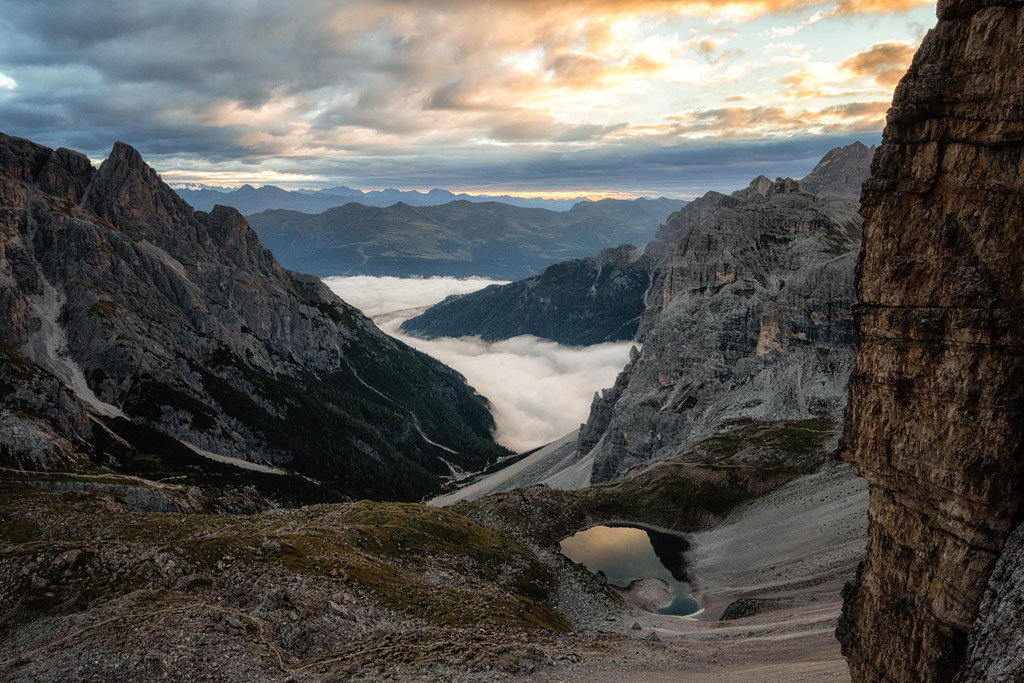 This via ferrata has some underground sections. You will need a head torch to guide you through.

Accommodation in MiSurina Or Cortina D'Ampezzo

Although Misurina is the closest town, it's tiny and the hotels here book out well in advance. If you want to be as close as possible make sure to book ahead.

Alternatively you can book a hotel in Cortina D'Ampezzo, the next biggest town and a great hub to base yourself in if you plan on exploring the Dolomites. It takes around 40 mins to drive from Cortina to rifugio Auronzo.

Below are a few of my recommendations for hotels in Cortina.

From rifugio Tre Cime/Locatelli follow the signs for via ferrata Innerkofler along the path leading toward Monte Paterno. The first part of the route is broken down in three stages:

1. The tunnels: In the first few hundred metres, you will follow a network of tunnels built during the first World war. You will need to bring a head torch, especially if you want to avoid bumping your head on the low ceilings.

The light coming through few existing 'windows' isn't enough to guide you through. Luckily there is only one way in and out so as long as you're are going up, getting lost is impossible.

2. The ledges: This is where the cable protection begins. Make sure to clip in. Unfortunately people have died along this via ferrata, and there are few plaques mounted to the wall to remind everyone of it. I always say it is better to be safe than sorry

3. The summit push: Once you make it to the saddle pictured below (forcella del Camoscio) you will have an option to veer off the path and summit Monte Paterno. If the weather is good, I highly recommend it. The views on the top are nothing short of spectacular and it would be a shame to put all this work and not go for the ultimate reward. 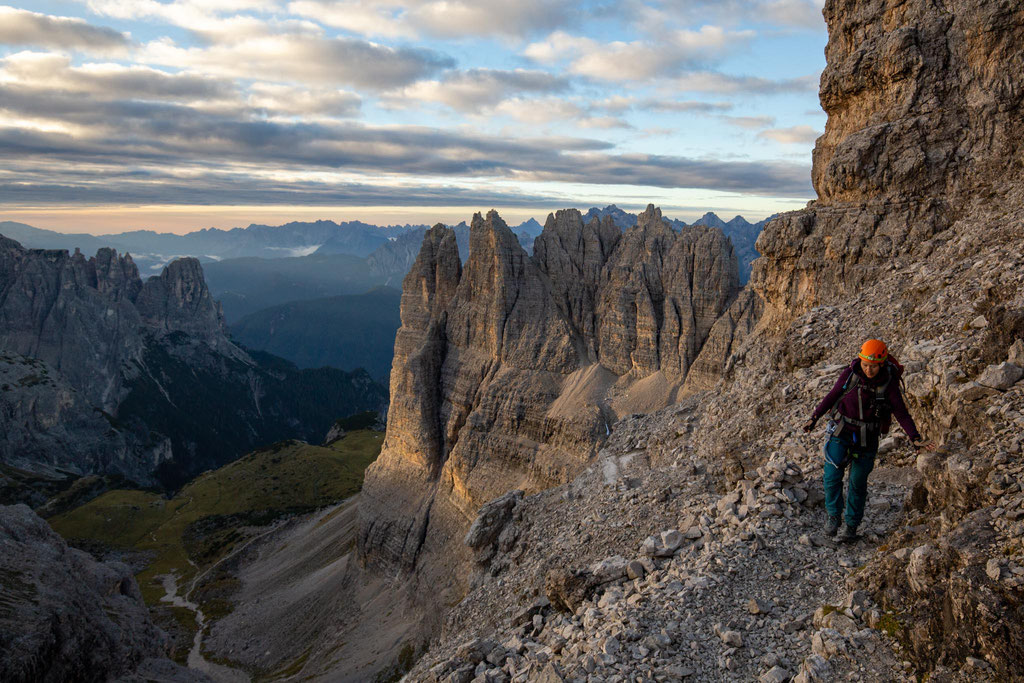 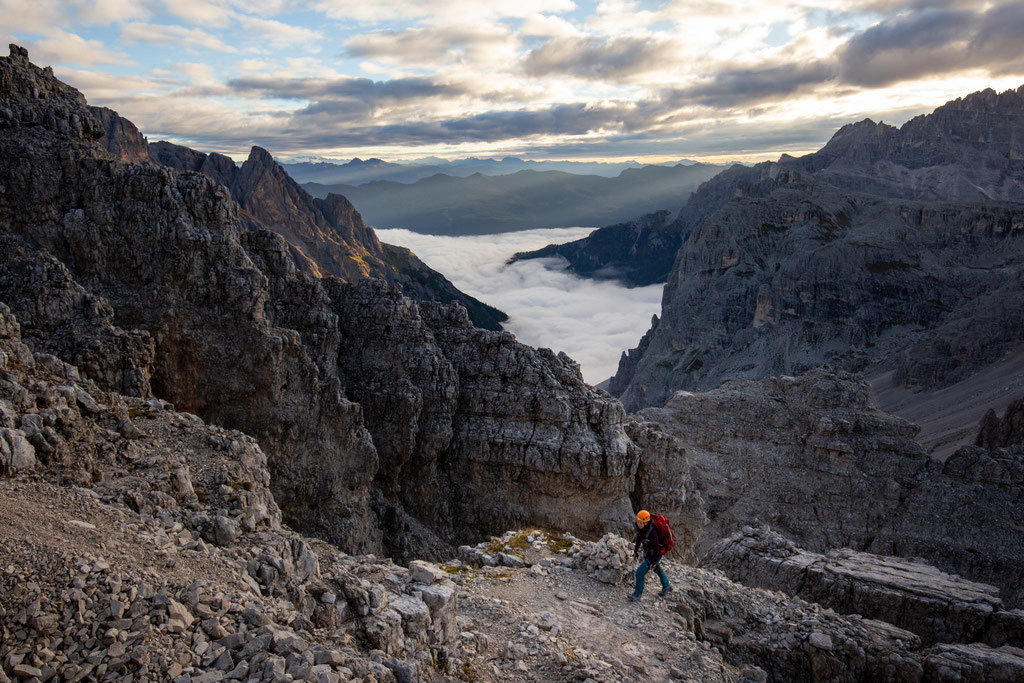 The descent from the summit follows the same route down to Forcella del Camoscio. From here you will have to follow the signs for rifugio Lavaredo sharply down on a scree path. Pay attention to the path. Due to big traffic it became braided in places and it's not too obvious.

A map comes in handy (Tabacco nr 10 or Tabacco nr 1), especially if orienteering doesn't come naturally. I am probably making it sound harder than it is, so don't worry. I always found it hard to get lost in the Dolomites as markings and signs are always excellent.

Next, after following a series of exposed ledges you will pass the saddle between Monte Paterno and Croda Passaporto. Forcella Lavaredo right beneath Tre cime (three peaks) will now be within your eyesight.

Continue along the ledges, past two short tunnels and around 20 minutes later you will get to the end of the ferrata. 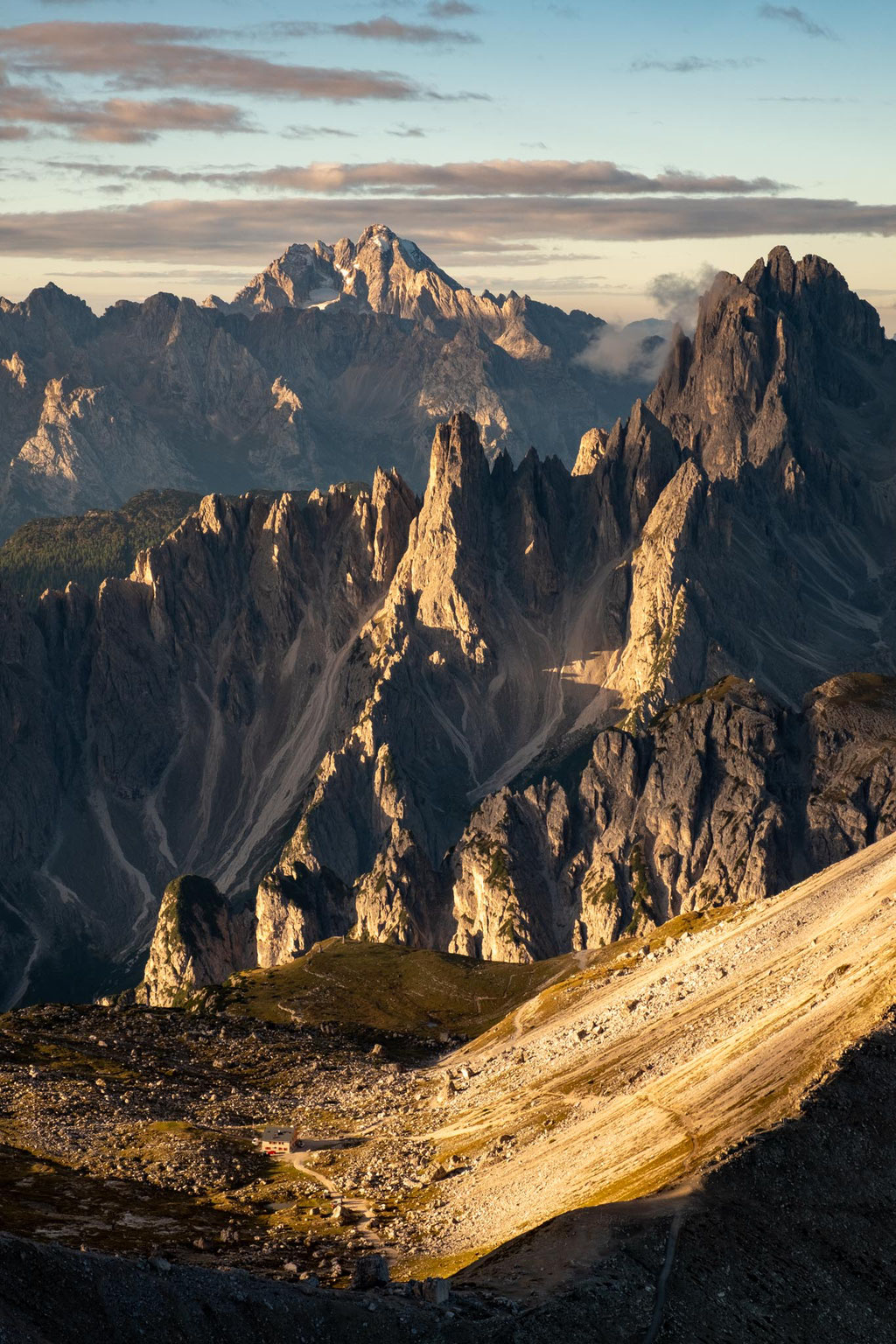 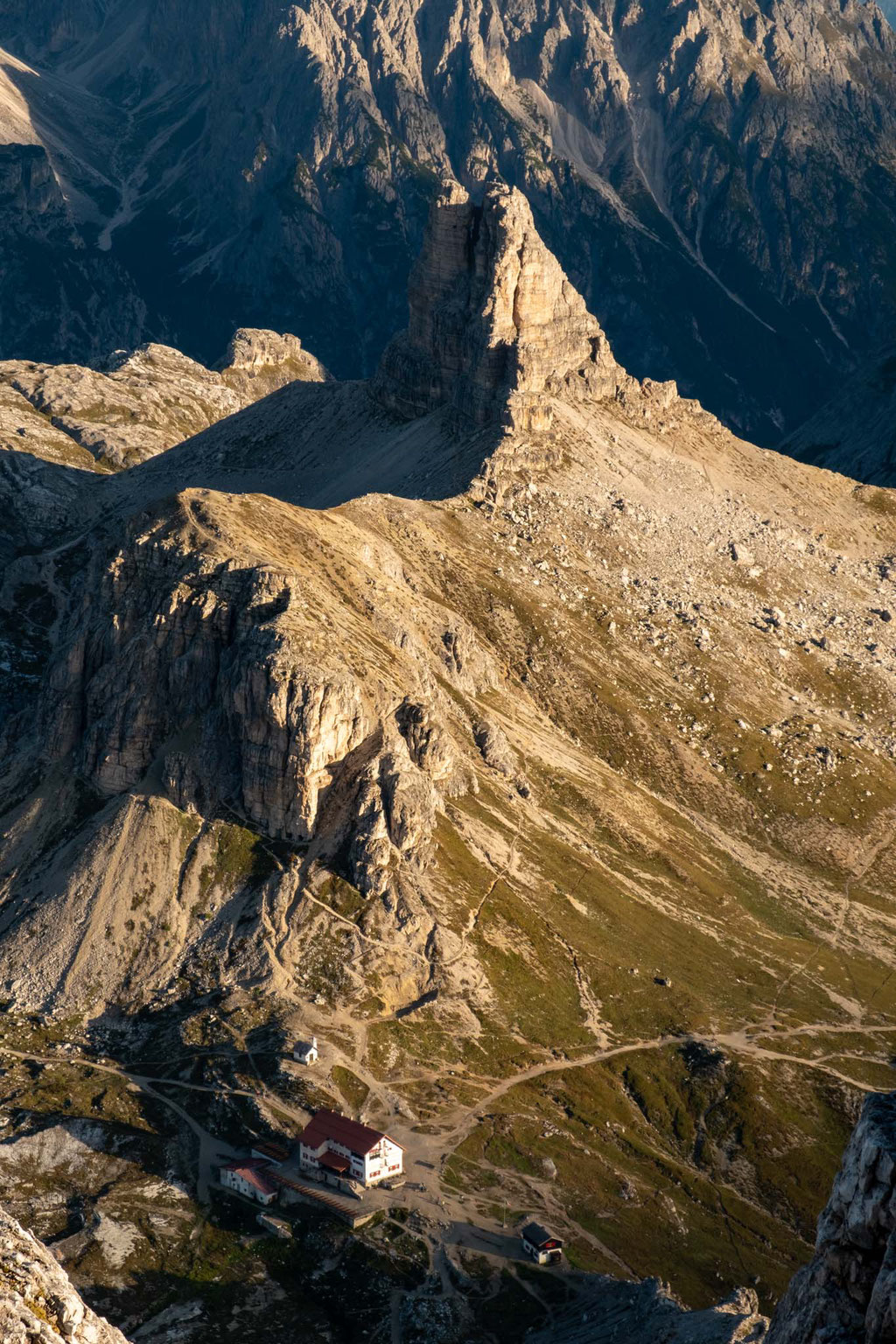 Once you make it to Forcella Lavaredo you need to retrace your steps along  path 101 to rifugio Auronzo where you started.

* Please note that the time provided in the basic info at the start doesn't include the time to get to rifugio Locatelli (the beginning of the ferrata) and to get back from forcella Lavaredo (the end of the via ferrata). The total time is around 6 hours.

It's possible to do the via ferrata De Luca/Innerkofler in reverse, starting at Forcella Lavaredo and finishing  at rifugio Locatelli. I also recommend staying overnight in the hut and tackling another nearby via ferrata Torre di Toblin the next day.

If you have any questions about this via ferrata or you are planning a trip to the Dolomites and you are seeking advice let me know in the comments below. I always answer.  For more information on via ferratas, photography spots and hikes go to my Italian Dolomites Guide.