Via Ferrata Marino Bianchi To The Summit Of Cristallo Di Mezzo

I am a strong believer that good things come to those who are willing to work hard for them. This is exactly the case with completing via ferrata Marino Bianchi.

From start to finish the views don't disappoint, but your calves will burn every step of the way!

Via ferrata Marino Bianchi will take you to the airy summit of Cristallo Di Mezzo in the Cristallo mountain group in the central Dolomites.

Even though the approach leaves a lot to be desired, I think the fun climbing part, with many interesting features, will meet the demands of any adventure seeker.

Via Ferrata MArino Bianchi - Everything You need To Know

When you haul yourself on a metal cable for half a day your hands will quickly become blistered. My advice is to go for full fingered gloves.

Part 1: Getting to Rifugio Son Forca

The fastest way to reach the Son Forca hut is by using the Rio Gere-Son Forca chairlift. The chairlift is located around

1 kilometre from Tre Croci mountain pass coming from Cortina d' Ampezzo - the nearest town.  The cost is 17 Euro round trip.

There is a big gravel parking lot on the opposite side of the road from the gondola station. The parking is free of charge.

You can also choose to walk to rifugio Son Forca directly from Passo Tre Croci using path nr 203. This will add another 2 hours to an already long day. My advice is to take the chairlift. Trust me, you will need the extra energy for what's coming! 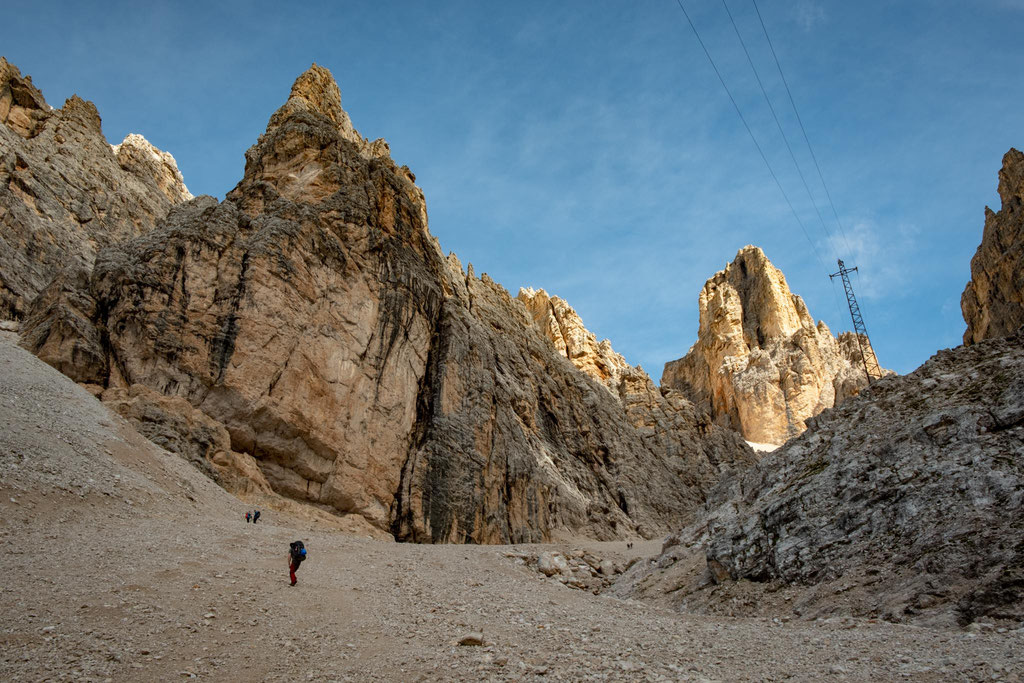 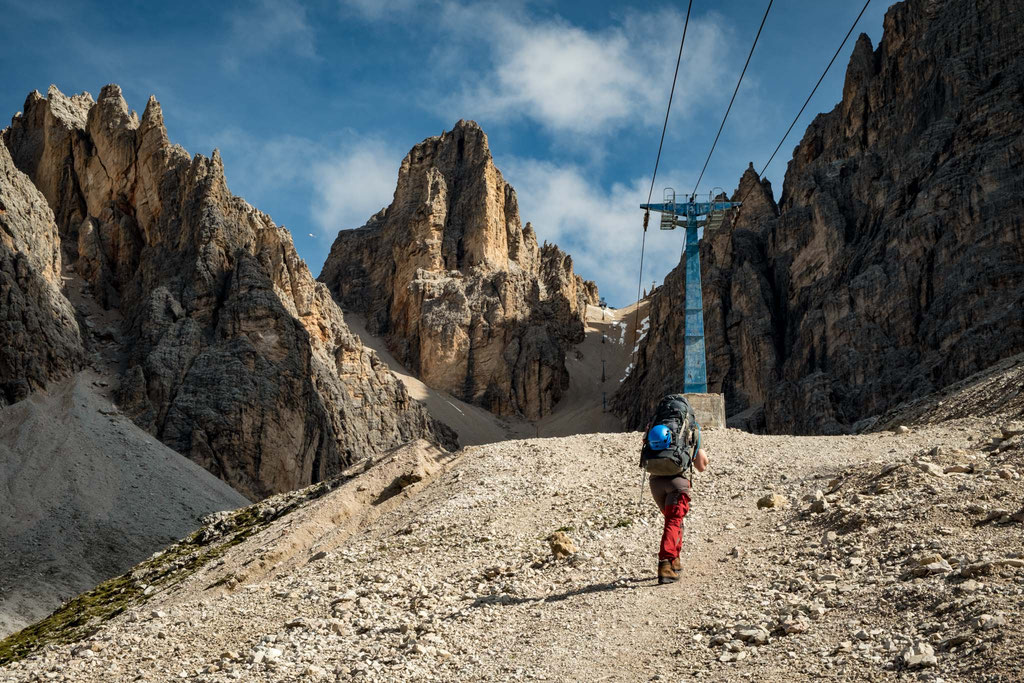 From rifugio Son Forca you will have to follow the signs for rifugio Lorenzi & via ferrata Marino Bianchi. The path leads through a scree gully with dramatic views of the spires all around.

Up until 2016 this part of the approach could be bypassed by another lift, however it has been closed for a few years now, and there is no prospect of it reopening in the near future.

If it wasn't for the views reminding me every step of the way why I am putting myself through this torture, I would have probably given up.

The scree becomes looser as you go higher, setting you back one step for each two steps you take forward. In other words, it's an arduous work. After 2 hours you should reach rifugio Lorenzi.

Rifugio Lorenzi and Forcella (saddle) Staunies, it was built on, make it one of the most photogenic huts in the Dolomites. Unfortunately the hut doesn't operate anymore and it's slowly decaying.

There are signs surrounding it to remind you to be careful when walking on its terrace as some planks have become loose and the whole construction doesn't feel sturdy.

should you choose to break the journey down into two days, there is still a tiny winter room left open where you can spend the night. This is especially useful if you are planning to tackle the nearby via ferrata Ivano Dibona as well.

It has two beds, a few blankets, but no electricity or any other amenities. We ended up sharing it with another couple, which made for a really interesting night.

I hope you are ready for some serious exposure. You will be thankful for all the cable protection which is present along the way.

Remember it only works if you clip in, so make sure to use your via ferrata equipment. Too often I have seen people along these crazy routes with their helmets and harnesses in their backpacks. 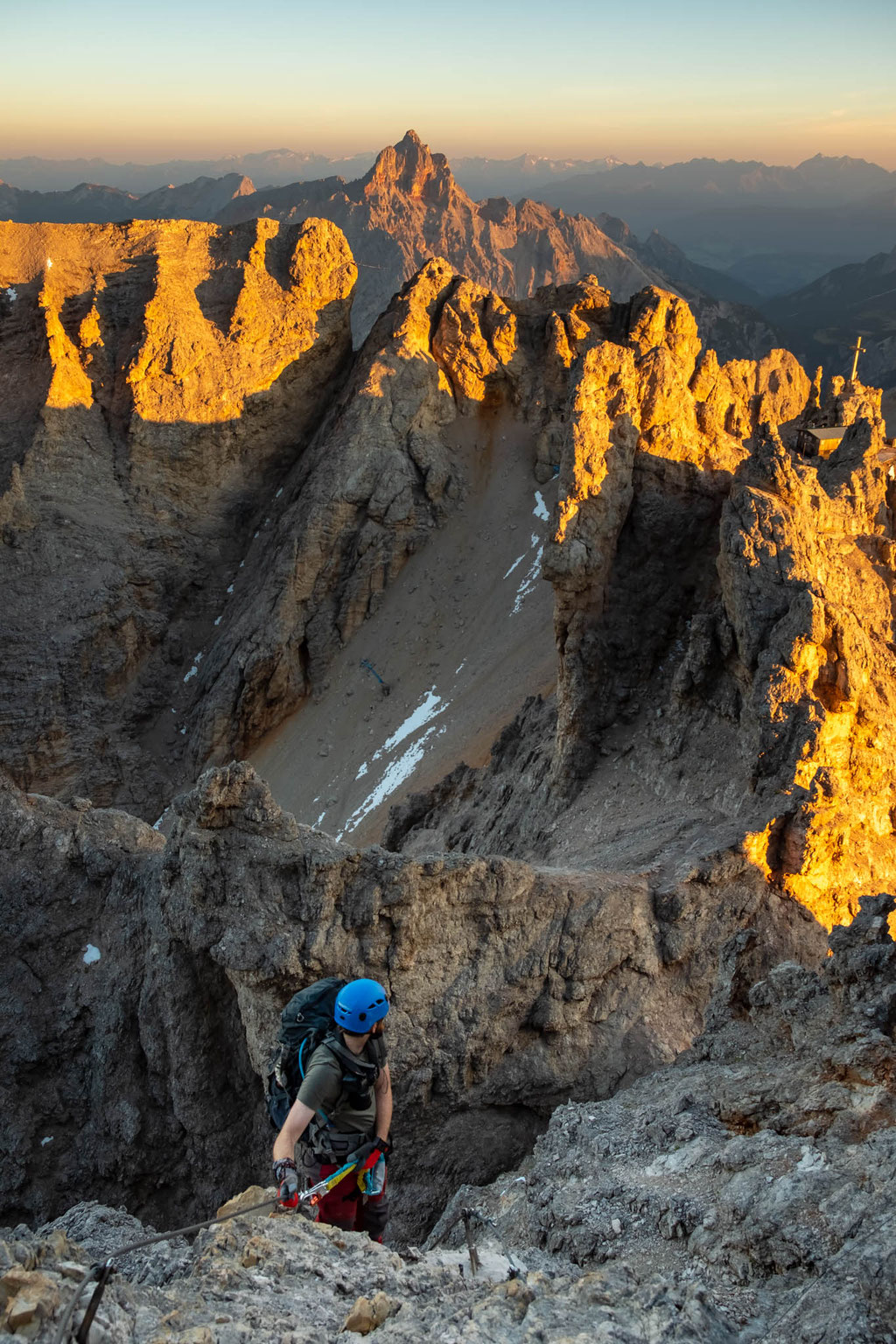 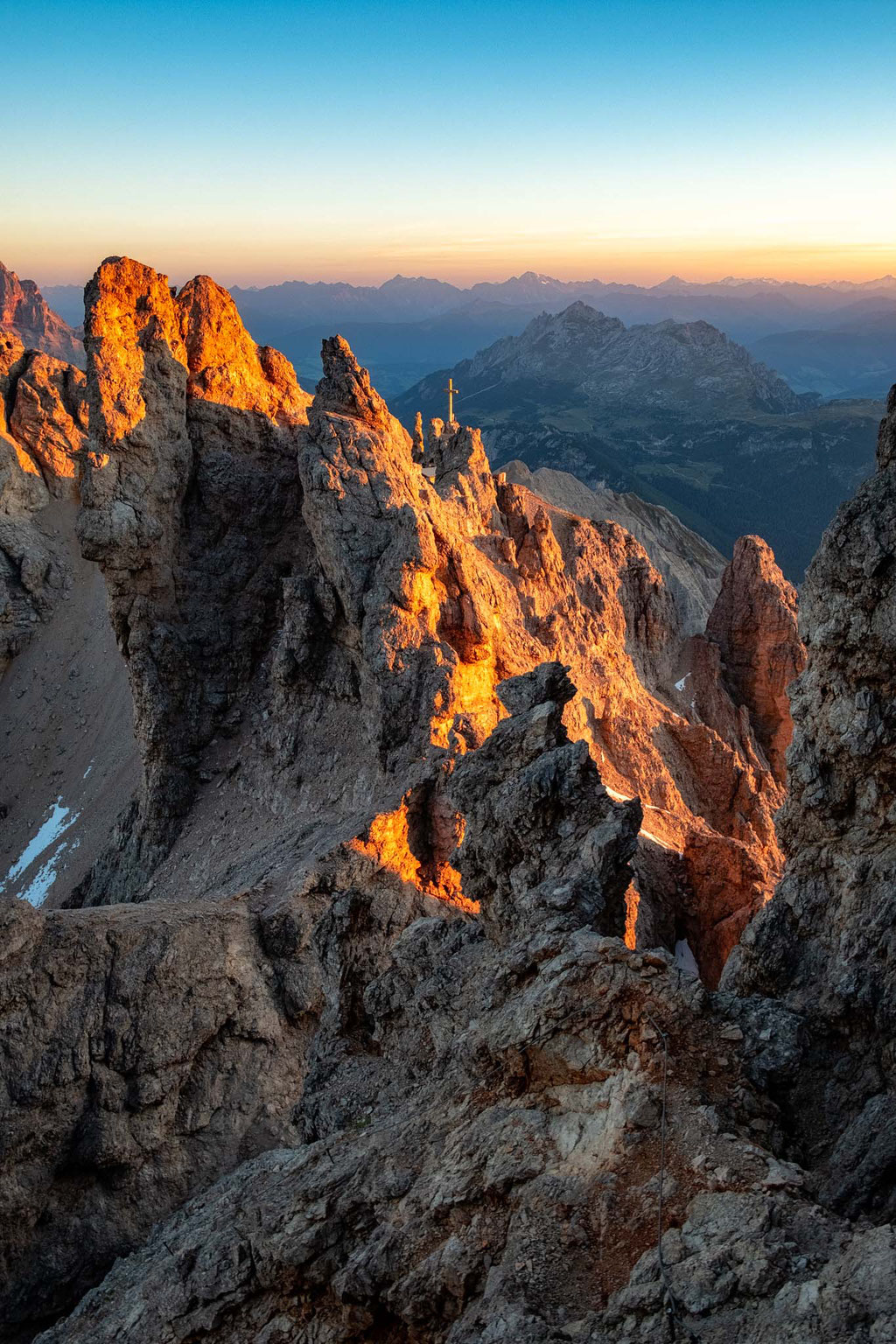 The route is very straightforward and on occasion also uses ladders. The cross above the Lorenzi hut will be visible most of the way up.

If you look back and squint your eyes you will also be able to see the famous suspension bridge along the nearby via ferrata Ivano Dibona (photo below). It's known from the movie Cliffhanger with Sylvester Stalone, which I am still yet to watch!

From rifugio Lorenzi it takes around 1,5-2 hours to get to the summit. From the top you get 360 degrees views toward the Sorapiss group to the south where the via ferrata Giro del Sorapiss runs.

To the north you can see Lago di Landro (Dürrensee) and slightly to the east the famous Tre Cime. If you look west you will see the Tofane group standing proudly above the town of Cortina D'Ampezzo. Make sure to bring a map with you (Tabacco 03) to be able to distinguish all the peaks around you.

Being able to look at it all from above 3000 metres is a great reward for the effort you have put in to get here. 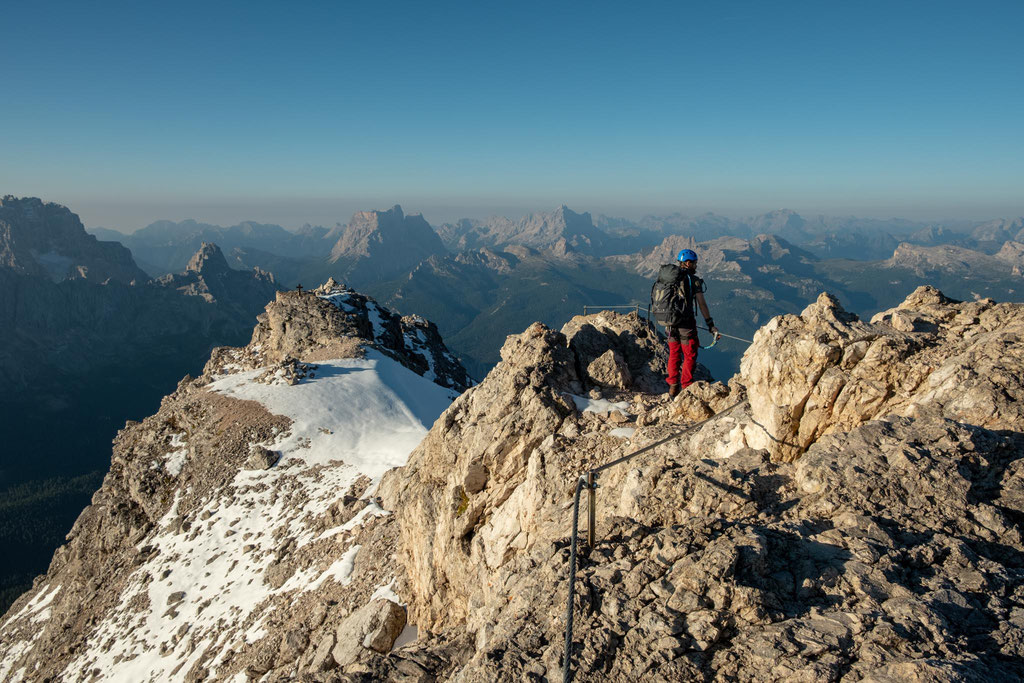 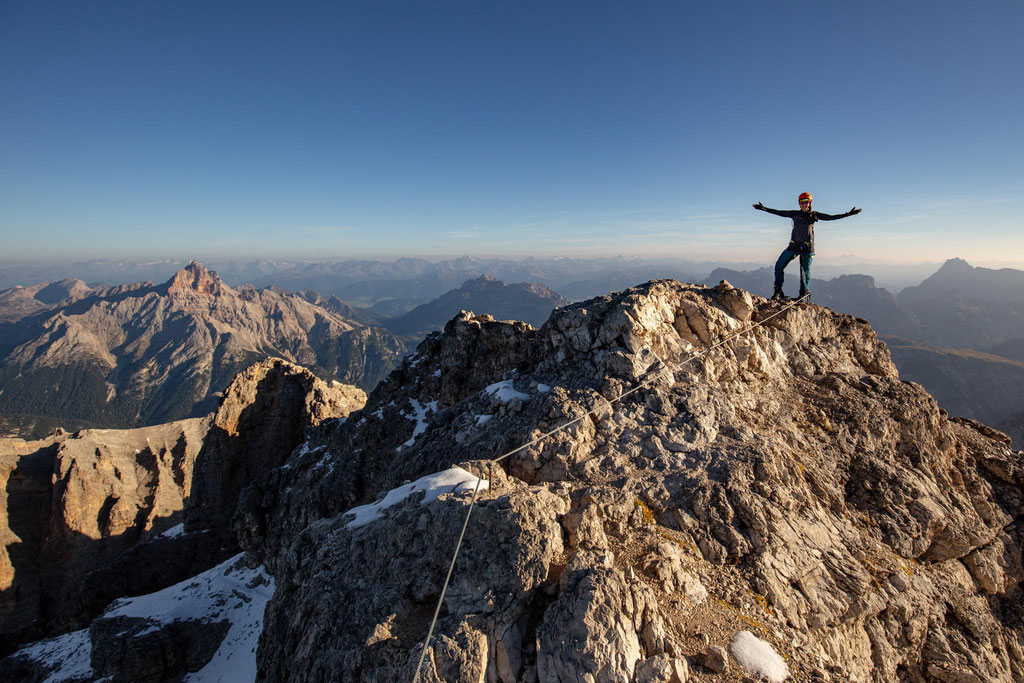 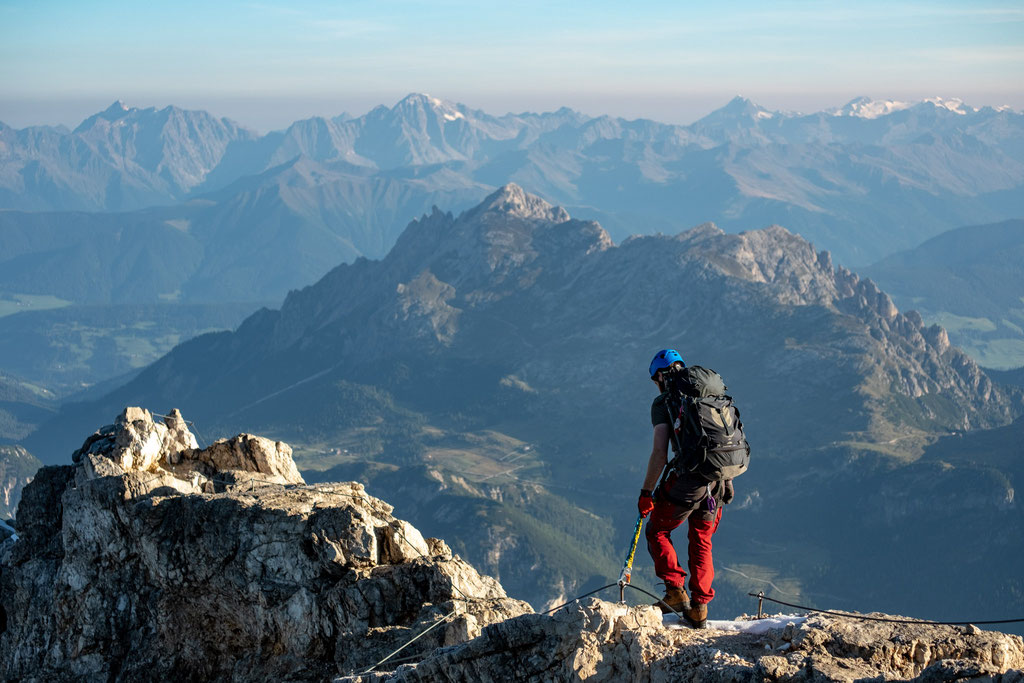 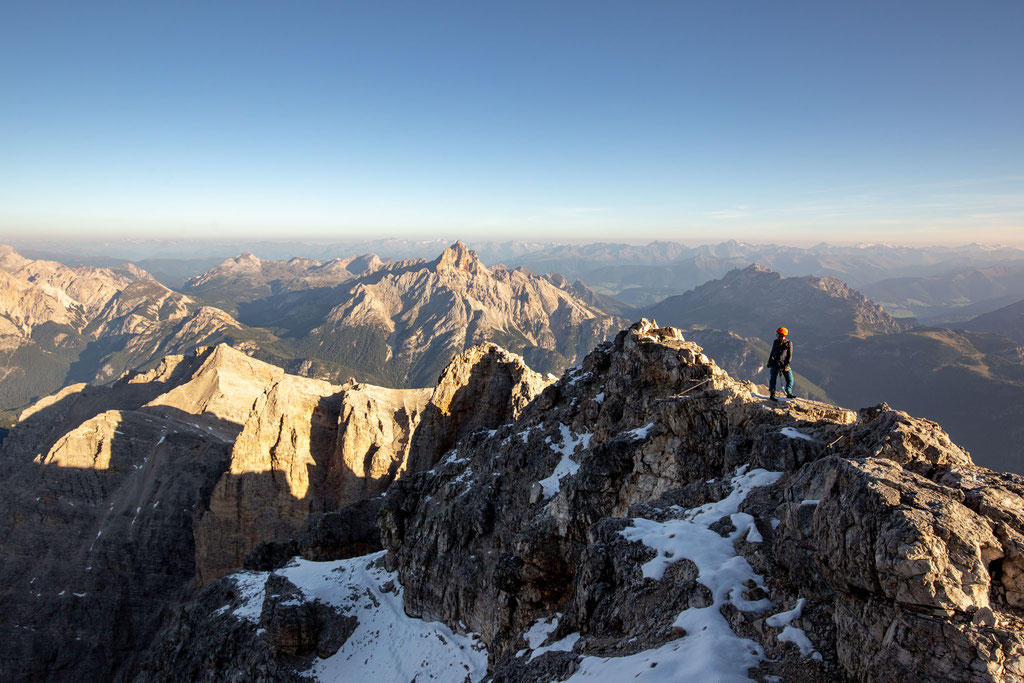 The descent starts near the summit cross and for the first 15 minutes follows an alternative route. Since Marino Bianchi is a popular ferrata in this area (less since the Staunies gondola closed) it helps with traffic decongestion. However it quickly gets you back on the same route.

To have the best chances for good weather make sure to start as early as possible. The weather in the Dolomites often follows the same pattern with crystal clear blue skies in the morning, cloud build up during the day, turning into storms by the afternoon.

The round trip from rifugio Lorenzi to the summit of Cristallo di Mezzo takes between 3-4 hours.

Extension to via ferrata Ivano Dibona

Are you an ultra marathon trail runner who hits the gym after running up a mountain? Was the fix of the good views not enough so far? Or do you want to stand in the exact spot where Sylvester Stalone stood fighting some badass villain in a hollywood movie?

Once you make it back down from the summit of Cristallo di Mezzo to rifugio Lorenzi, you can head across to the other side of the saddle and hike to the famous suspension bridge along the via ferrata Ivano Dibona. 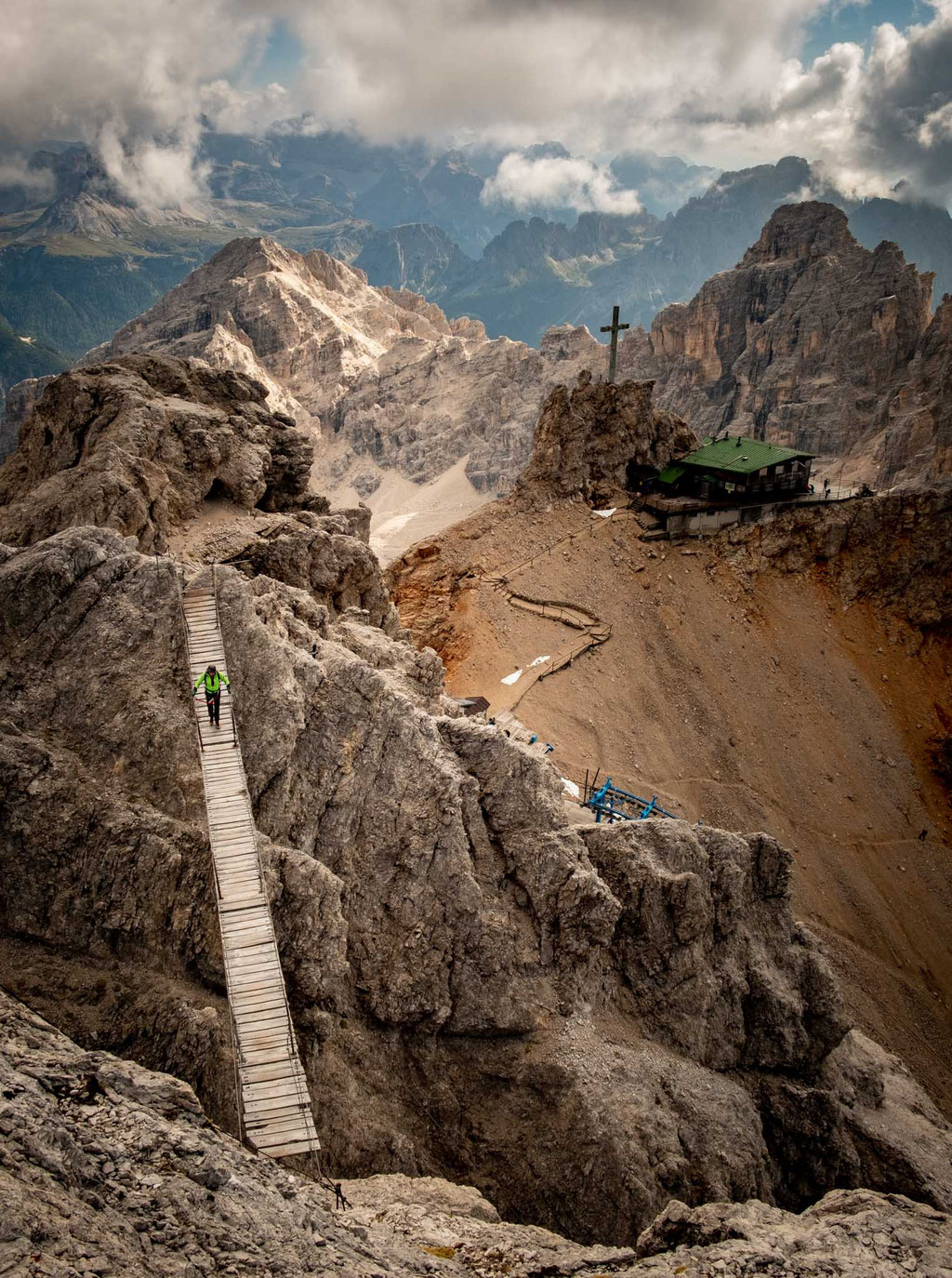 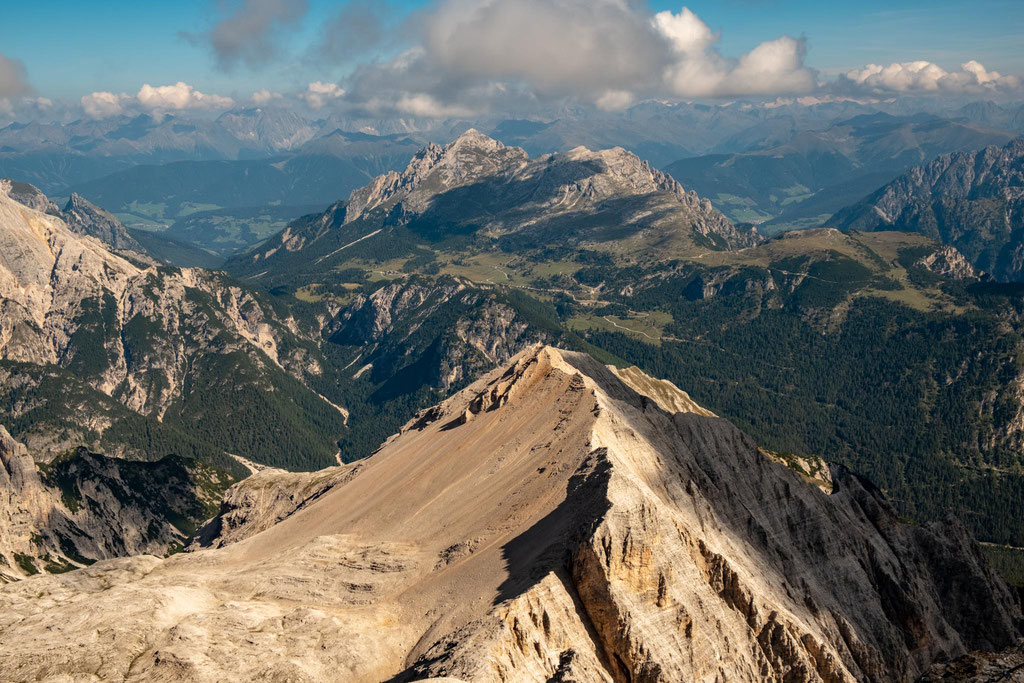 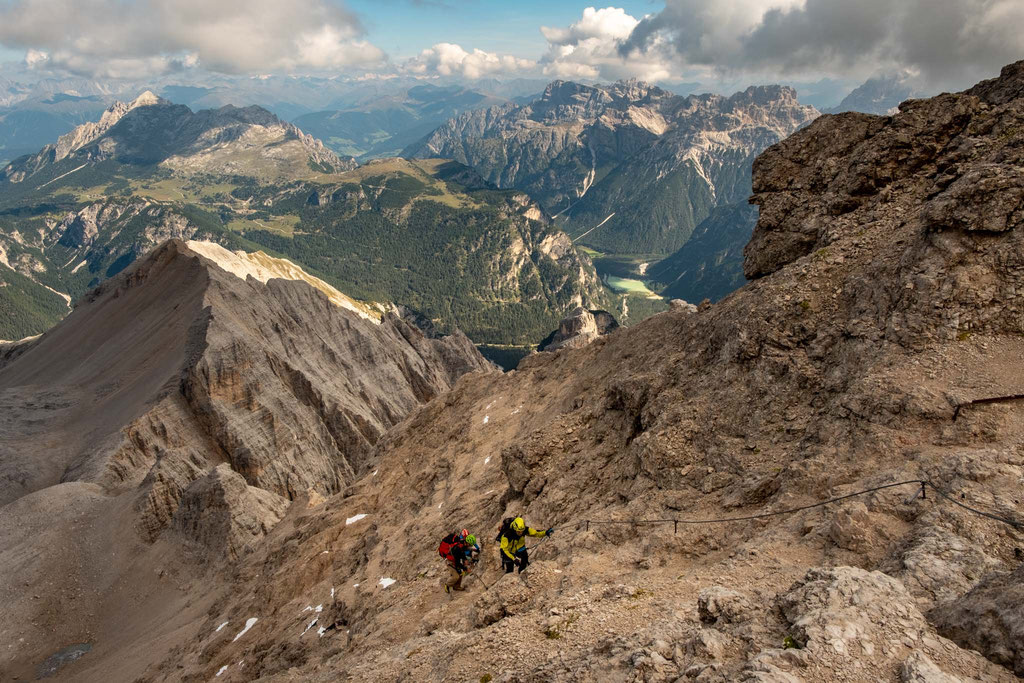 The short detour is well worth it. It will only take 45 minutes to an hour there and back.  Walking along the bridge and looking down will make your heart beat faster. You will also get the perfect view of the ridgeline where you were climbing earlier along the via ferrata Marino Bianchi.

If you are not up for it or like me, plan to come back another time, just retrace your journey down the scree gully between rifugio Lorenzi and rifugio Son Forca. The good news is, the way down will be a lot swifter than the way up.

I made good use of my hiking poles and decided to run back down, taking big steps. I was back in Son Forca hut within 45 minutes, where a glass of beer and obligatory strudel waited for me!

If you have any questions about this or any other via ferrata I describe in my Italian Dolomites Guide, make sure to post them in the comments!

Don't forget to pin these for later!