The craggy rockface up the western facing slopes of Monte Fiames makes for a satisfying half day excursion on the Pomagagnon Range under 5km north of Cortina d’Ampezzo.

The route climaxes on a lofty summit and descends along a demanding scree slope! Make sure to pack your hiking poles for this one!

This route is generally accessible between mid June until mid October, but do bear in mind that it can be icy in the mornings during the autumn months.

Where does via ferrata Michielli Strobel start?

The trailhead is on the opposite side of the road to Hotel Fiames on Strada Statale (state road) 51 di Alemagna.

There’s ample parking but if it does become busy, an overflow car park is around 100m back toward Cortina on the same side as the hotel.

I really recommend starting this via ferrata early. The slopes are west facing meaning if you start late you could spend several hours exposed in strong direct sunlight.

When you haul yourself on a metal cable for half a day your hands will quickly become blistered. My advice is to go for full fingered gloves.

The nearest town to the trailhead for the via ferrata Michielli Strobel is Cortina D'Ampezzo. It's only 10 minute drive away.

Being in the heart of the central Dolomites, Cortina makes for a perfect town to explore the nearby attractions. I highly recommend that you stay at least a few days in Cortina.

Below you will find a few of my hotel recommendations. Please use the affiliate links and support my website. It will cost you nothing and help me create more useful content for you! 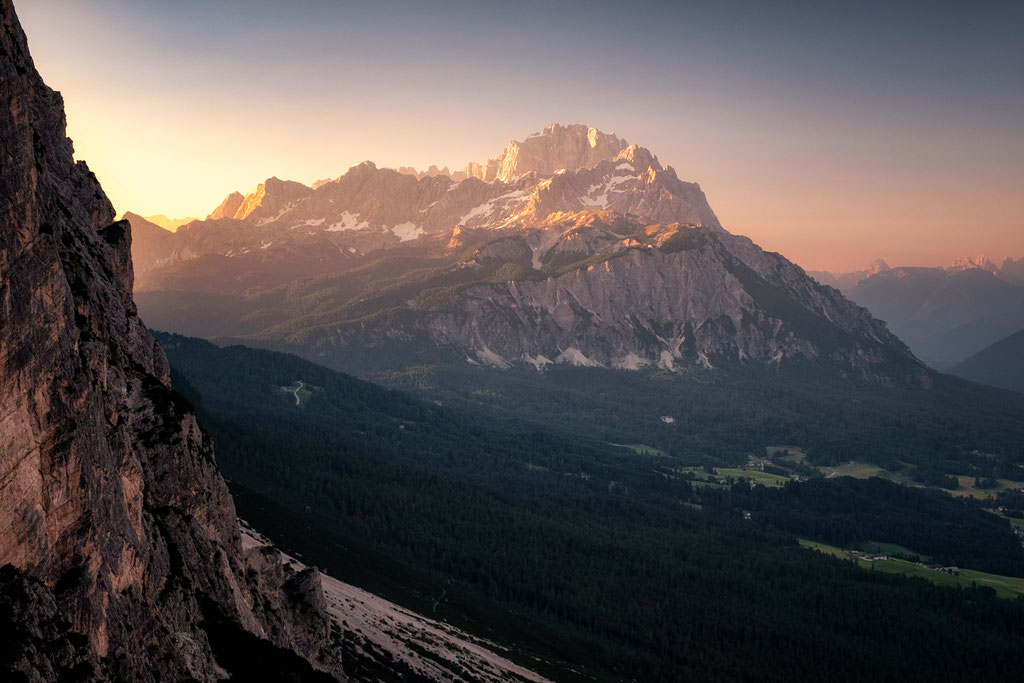 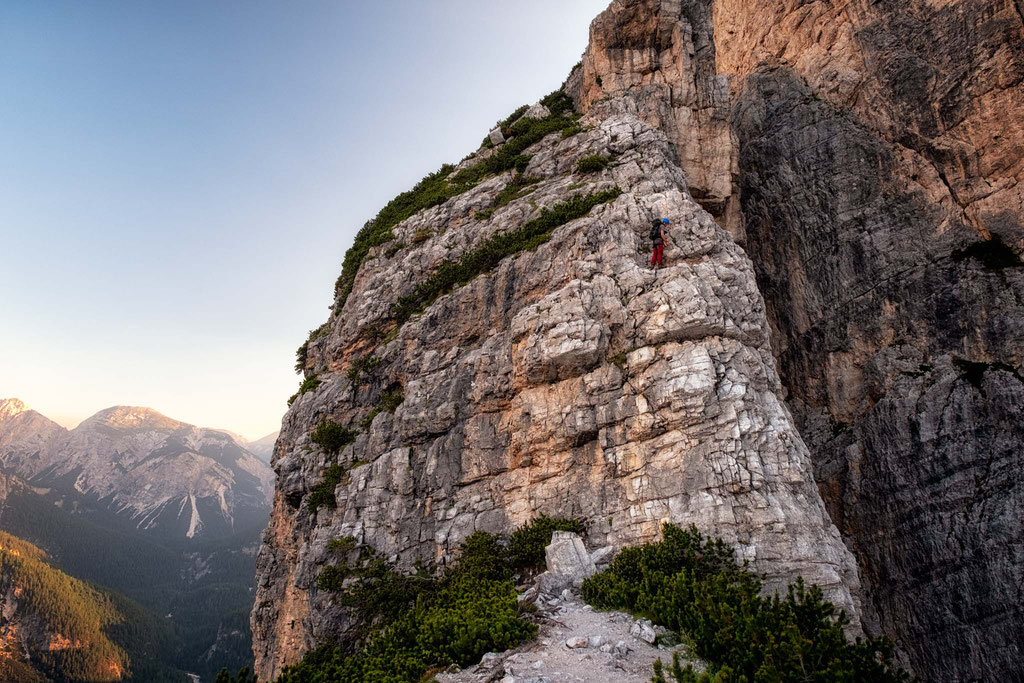 The approach starts in a thick pine wood where interwoven roots underfoot can make you stumble once or twice. This is especially true if you aim to start climbing before sunrise, like I did!

After a few minutes you’ll emerge out on an old railway line (now a cycle path). Here you’ll make a right turn followed by a left turn after 100m onto a much thinner hiking path that quickly ascends on a springy forest floor and then a scree slope.

Before you set of from the car park scan the pathway from the road. You should be able to see the upper scree path before setting off (hint: you can see it on google street view as well).

The path is fairly obvious and well signposted but I still found it useful carrying my GPS with me. There were times when I was questioning whether I was on the right course.

To begin with, your destination at the cliff face is not obvious but not before long a wide ledge becomes apparent as you switchback up an unassuming scree gully interspersed with sections amongst fragrant dwarf pine.

Turning right, walk along the ledge past the official Michielli Strobel Via Ferrata plaque. After a quick few unprotected scrambles up some of the bigger jots, you’ll have reached the start of the cables. This initial approach lasts around 45 minutes to 1 hour.

There is lots of space directly underneath the first cable so it’s a great place for your group to stop and harness up.  I would advise you putting your helmet earlier, as soon as you reach the cliff, because you’ll walk underneath climbers most likely unaware of your presence, hundreds of metres above you.

The scrambling along the via ferrata section is straightforward and is made easier by numerous large handholds and footholds on decent rock. In the toughest places pegs, staples and ladders are placed smartly to assist you in your progression.

The views become more expansive as you gain height. They are predominantly south facing over the town of Cortina with a few to the north west toward Col Rosa and Col Becchei.

After the last major section of climbing you begin your summit push on a good scree slope between wind beaten dwarf pine bushes.

The peak is small with a steep cliff on the opposite side of approach but a lovely place for a snack, some breakfast and a few photos. Maintaining a decent pace with stops for kitting up, photos and a snack, you should achieve the summit in roughly 3 hours.

If you’ve got the time and energy, there are other slightly higher peaks nearby that can be summited for similar but slightly loftier views. 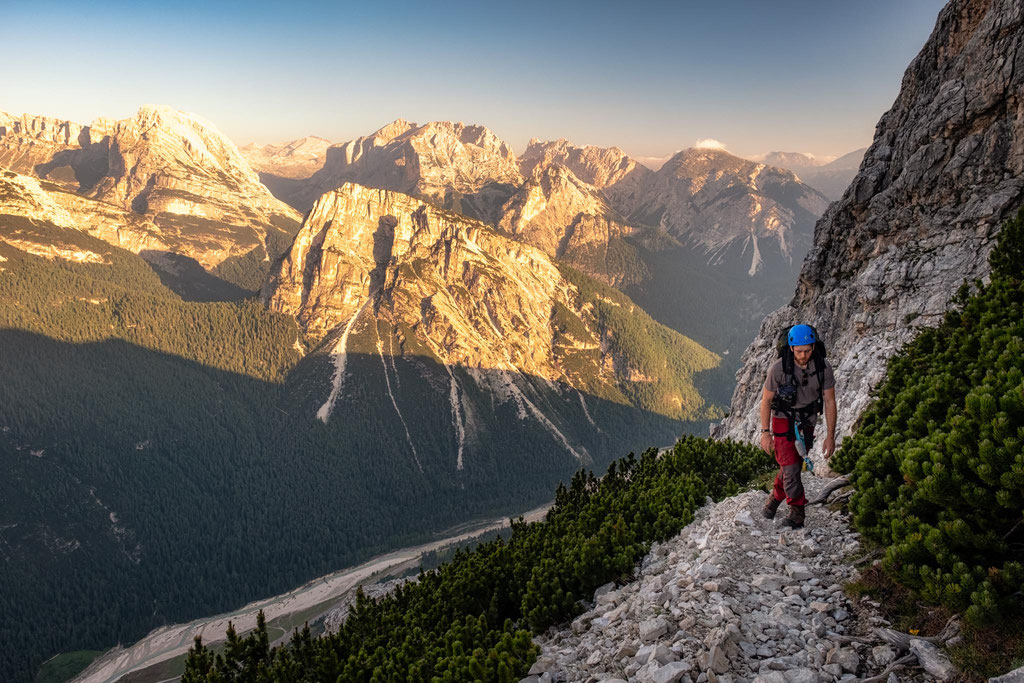 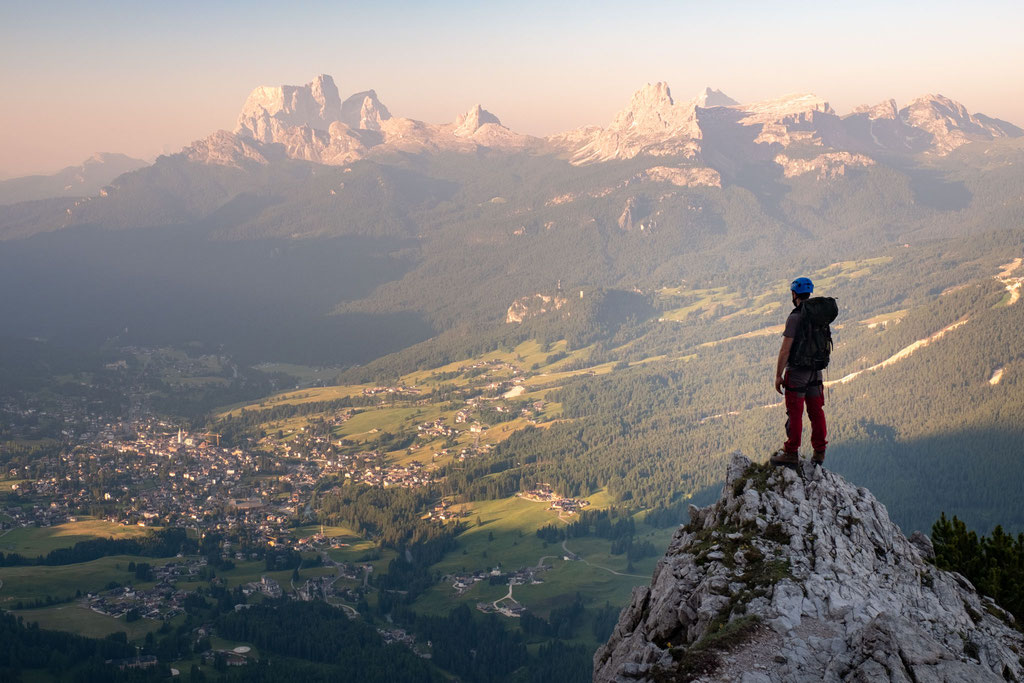 The descent takes you back down from the summit along the same path of ascent but then bears east toward Forcella (saddle) Pomagagnon deeper into the Pomagagnon Range. Make sure to carry the Tabacco Map nr 03 or GPS with you and study the route beforehand.

Once you’ve passed a short 20m protected traverse, this is the last you’ll need your harness. Once you reach the saddle it’s a great place to pack it away. 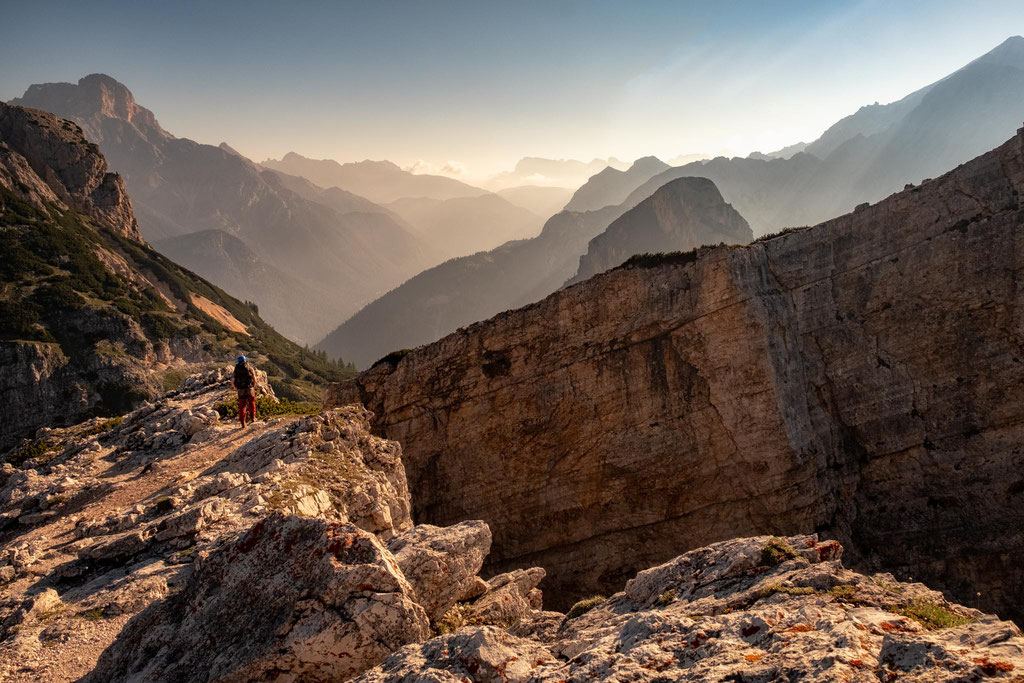 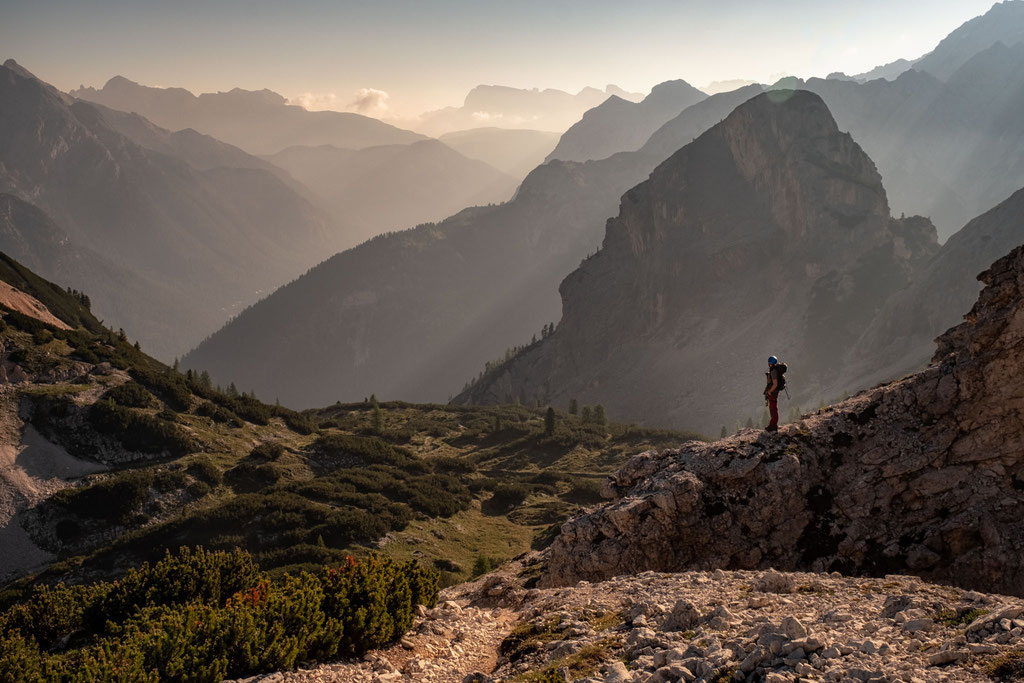 Down from Forcella Pomagagnon can be either a dream or a disaster. If you have good knees, can scree surf and don’t mind the occasional slip on your bum then you’ll fly down quickly. If however you aren’t too confident on scree then it’s a very demanding steep journey down with no real path just desire lines left by the ‘skiers’.

Either way as long as you’re heading downhill you’re going in the right direction. As the gully swings rightward, you’ll emerge near path 218 which takes you back to Fiames.

Path 218 can still be scree surfed in parts but not before long enters the forest where an uneven trail leads downhill toward the old railway road.

Once you emerge out onto the old railway road, a right turn will take you back toward Hotel Fiames where you started a few hours earlier.

If you have any questions about this route make sure to post them in the comments below. For more information on the Dolomites including day hikes, other via ferratas or hut to hut trips visit my Italian Dolomites Guide.