Via ferrata Pössnecker, also known by its Italian name - Mesules, at 108 years old (as of 2020), is one of the oldest via ferratas in the Italian Dolomites. It scales the feature-rich western face of the Sella Massif.

The original wooden ladders and steps have long been replaced by modern cables and stemples, but it doesn't change the fact that this is a demanding and advanced route.

Before you read or research any further about via ferrata Pössnecker, you need to know that it contains sections of unprotected grade 4 climbing.

For anyone who is a climber, grade 4 is nothing but a walk in the park, however if you never experienced the exposure on a rock wall, this via ferrata can give you some serious vertigo.

Make sure to spend a few days tackling some of the beginner or intermediate via ferratas first, before moving onto harder ones.

Guide To The Via Ferrata Pössnecker In The Italian Dolomites

The route starts at Passo Sella - one of the most photogenic mountain passes of the Dolomites, just a few meters away from Hotel Maria Flora on route SS242 coming from Canazei - the nearest town.

There is free parking area right near the start of the path, but it does fill up quickly during the day so make sure to arrive early.

The approach follows path nr 649 across undulating fields, in the early summer months they are often strewn with wildflowers. Right ahead stretches the dramatic view of the Sella towers (see photo above). The path then navigates through a small boulder field before a short uphill burst takes you to the start of the cables. This is where you can gear up.

This approach should take no longer than 30 minutes in total.

The klettersteig (via ferrata in German) plaque stands boldly against the light rock and boasts a construction date of 1912 making this one of the oldest via ferratas in the Dolomites, most notably predating WW1 when a large number of them were created. 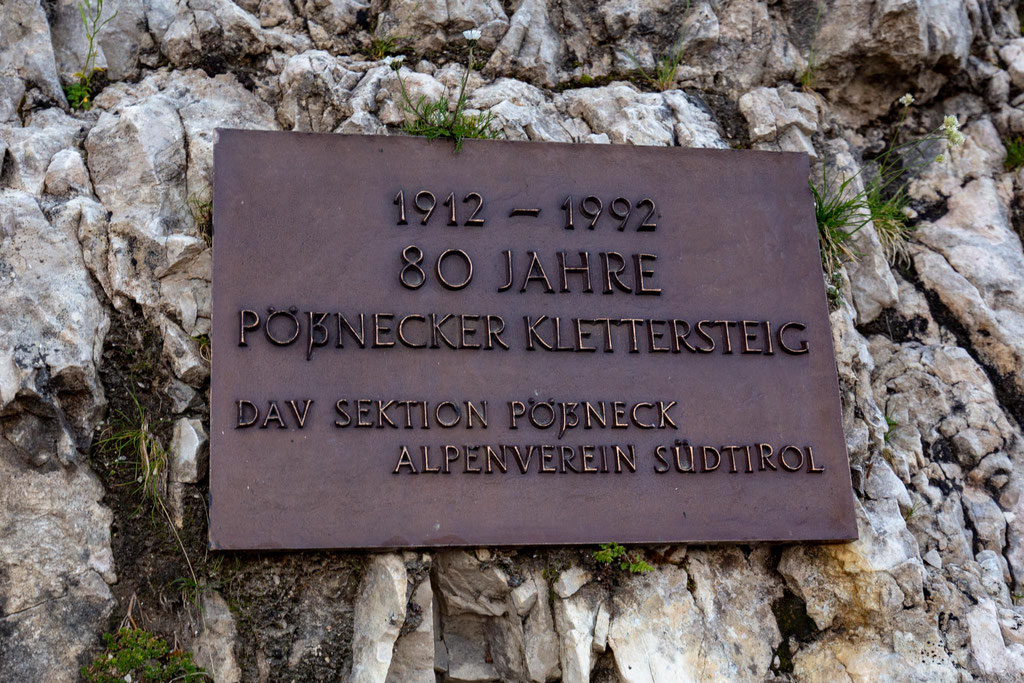 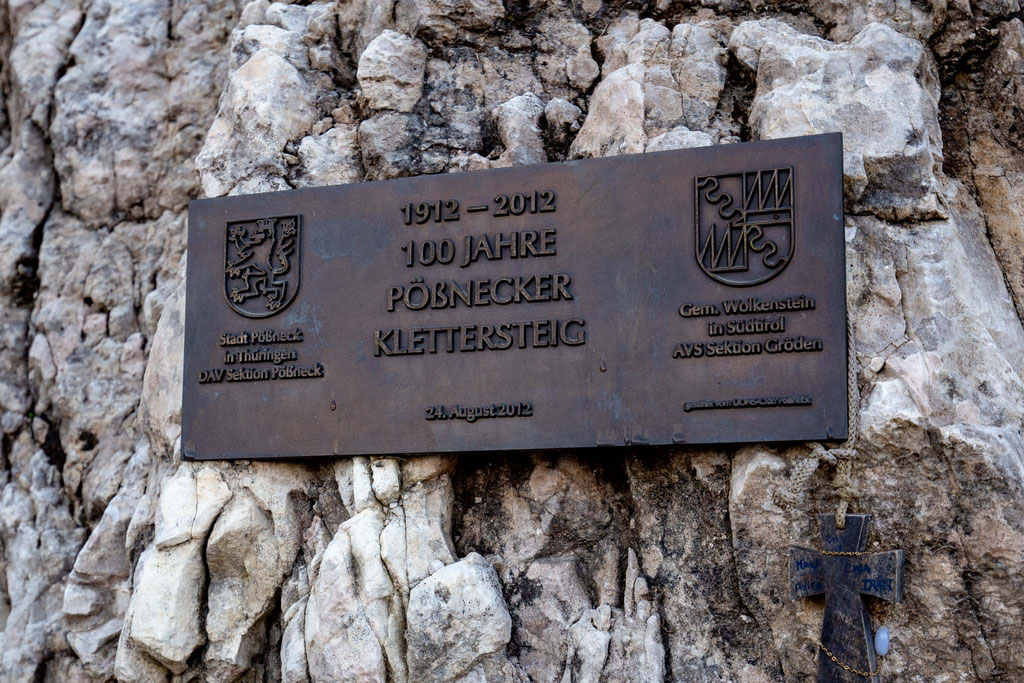 The climbing is immediately of grade 4C and rises quickly offering fantastic views back toward Sassolungo, where another one of my favourite via ferratas runs - Oskar Schuster.

Most of the hand/foot positions are clearly indicated by yellow stains from over 100 years of leather climbing gloves and rubber soled mountain boots.

Not before long you enter an unassuming gully and start to ascend unprotected. It’s the trickiest part of the route and a rope could be useful for extra security (see the photos below).

Then by a series of unprotected staples with significant exposure the route re-joins the cables and you can continue on feeling much safer. A couple of hundred meters later it changes to a shallower pitch and continues up on scree switchbacks. 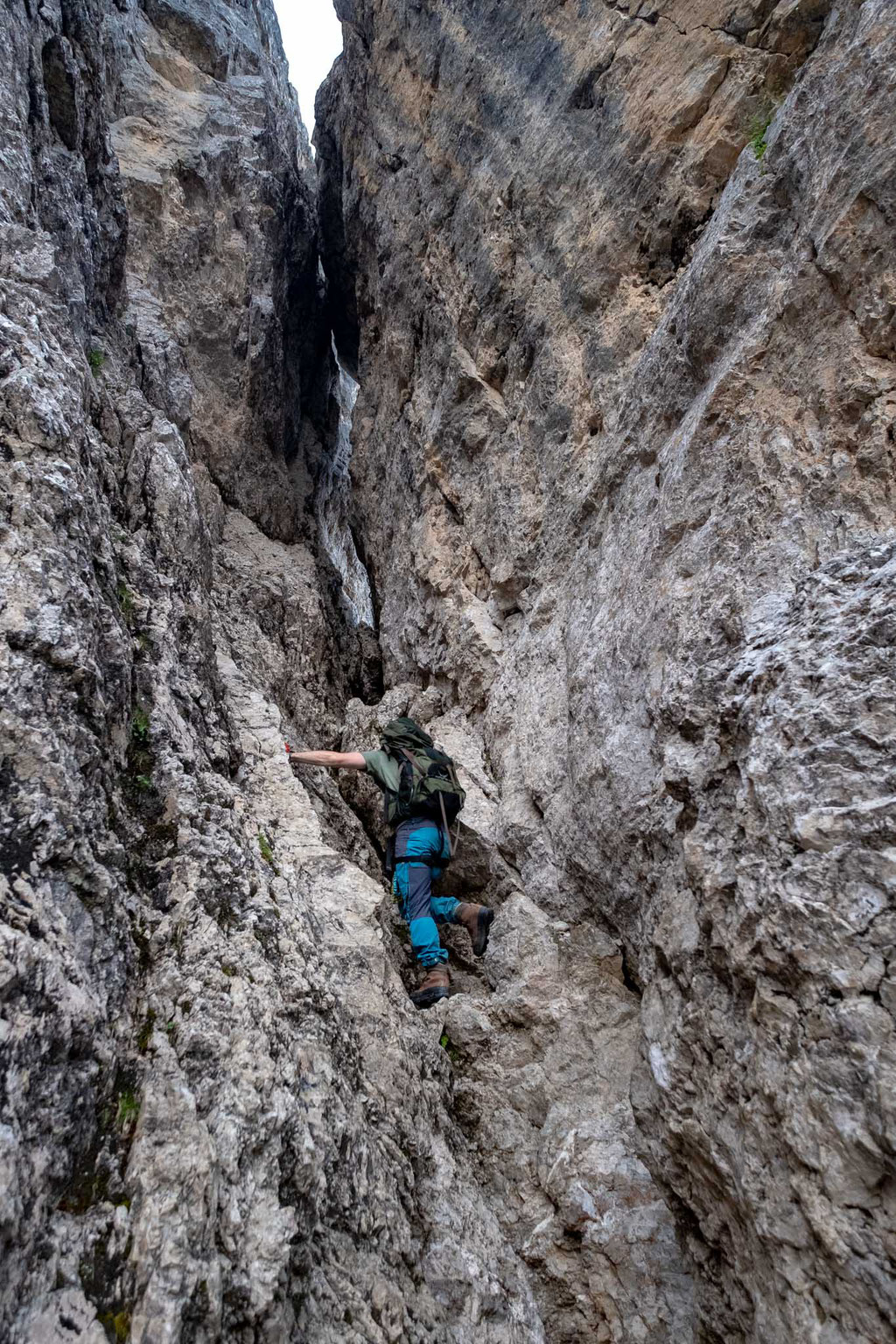 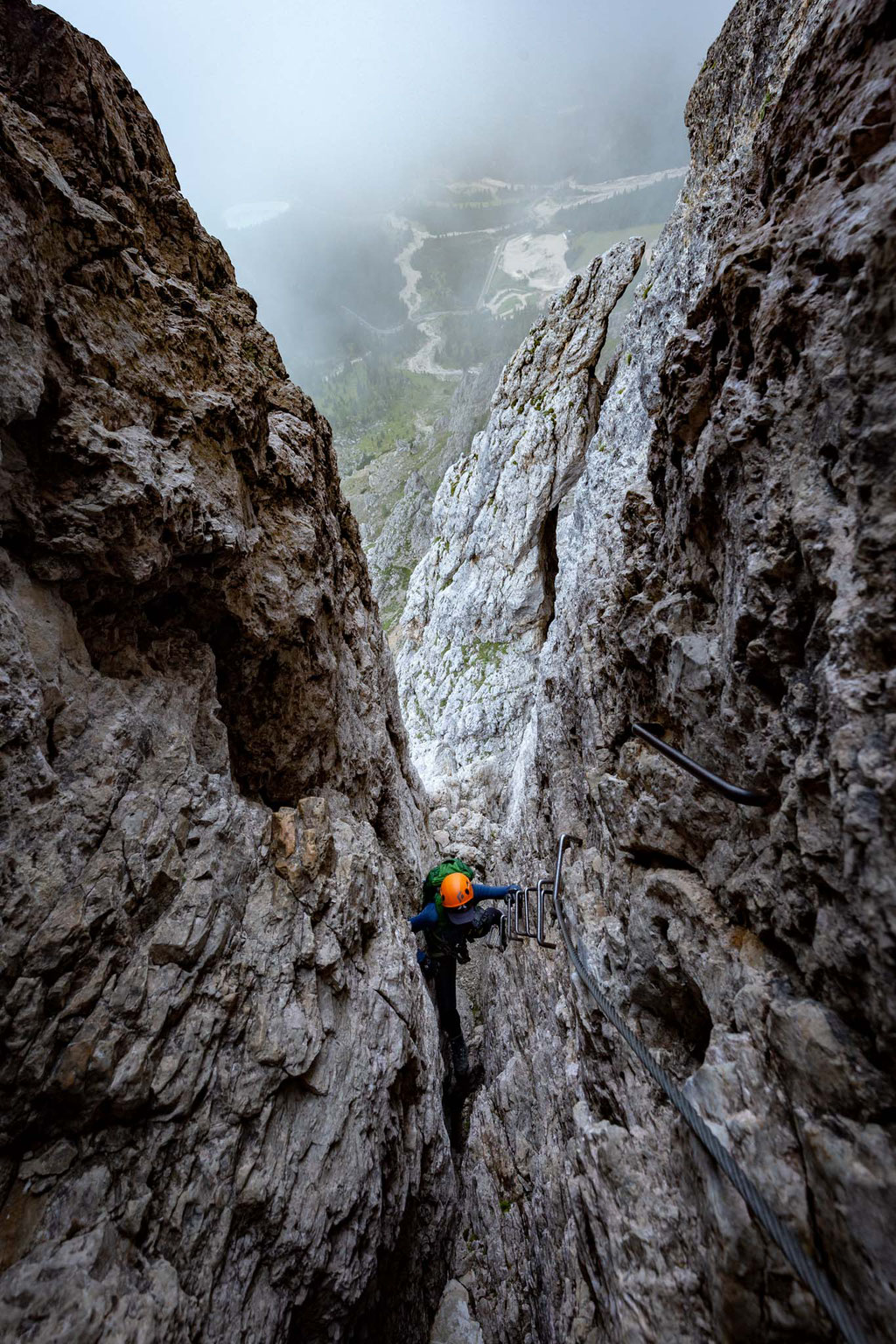 The most scenic part of the route for me is on the first plateau on the Sella Massif, which marks the majority of the ascent. You will reach it after the first couple of hours.

It’s a great place to snap incredible photos of the largest of the Sella Towers, Sassolungo, Sassopiatto and over Val Gardena to Furchetta, Sass Rigais and the rest of the Puez-Odle Range. 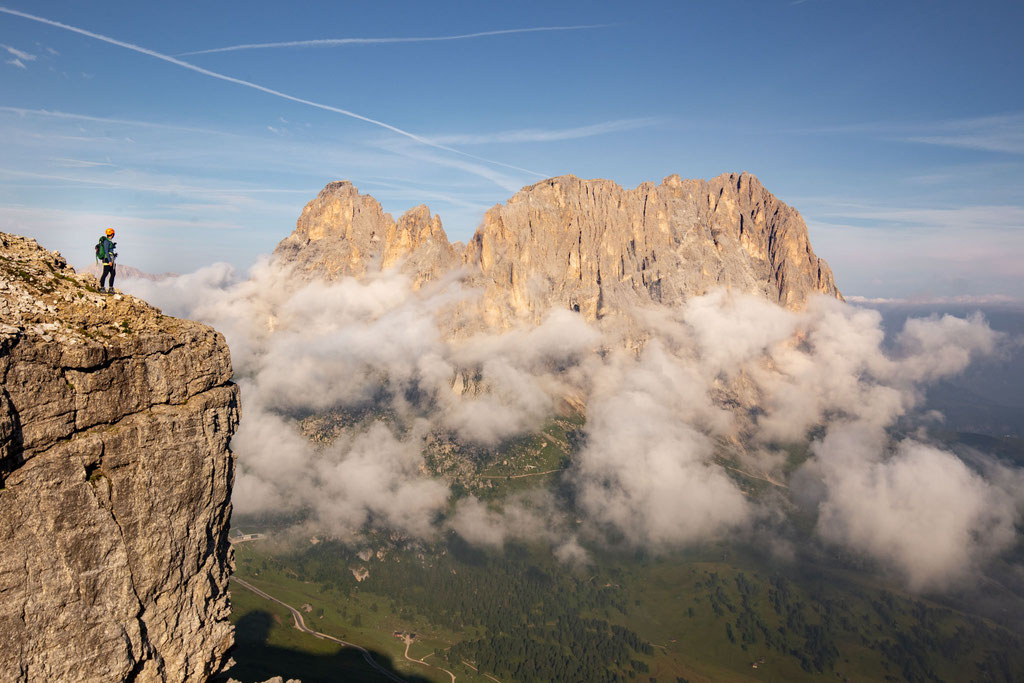 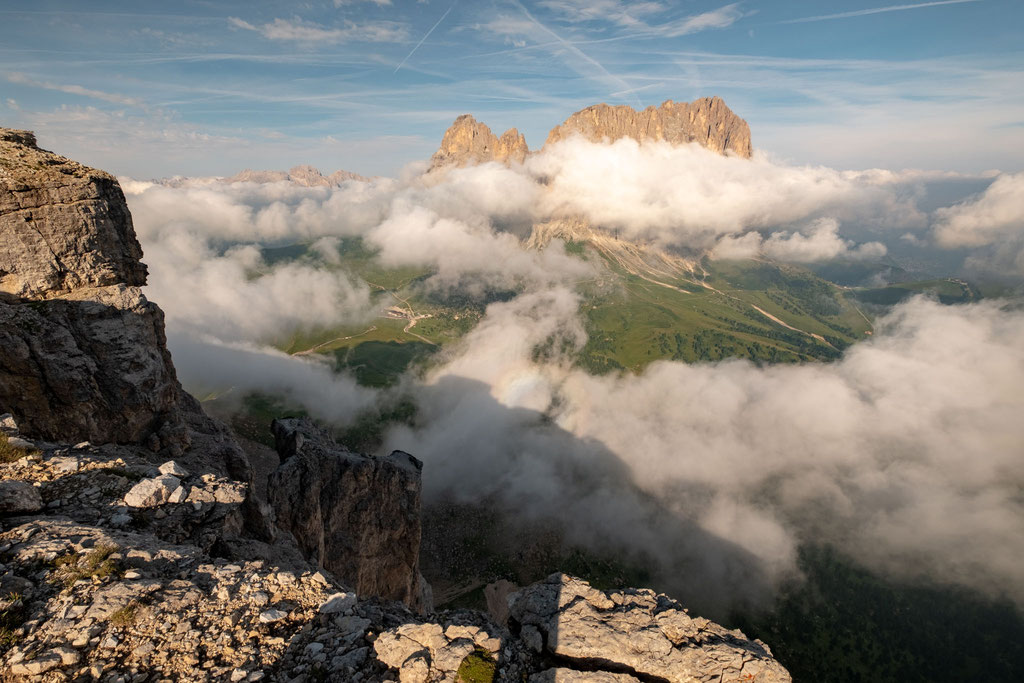 From the plateau the path continues east north eastward to a scenic col. In case you are wondering how will you ever be able to follow all these directions, don't worry, routes in the Dolomites are always marked with white and red markers. All you have to do is pay attention and follow them!

After the col comes the next section of climbing. It is far simpler (and shorter) than the first one and ends at the small summit of Piz Selva (2941 meters / 9649 feet).

The wide, open summit offers 360 vistas of the top plateau of the Sella Massif which feels like a completely different topography altogether. The disparity between the rich, green Passo Sella and the arid, grey rock on top of the Sella Massif is amazing. 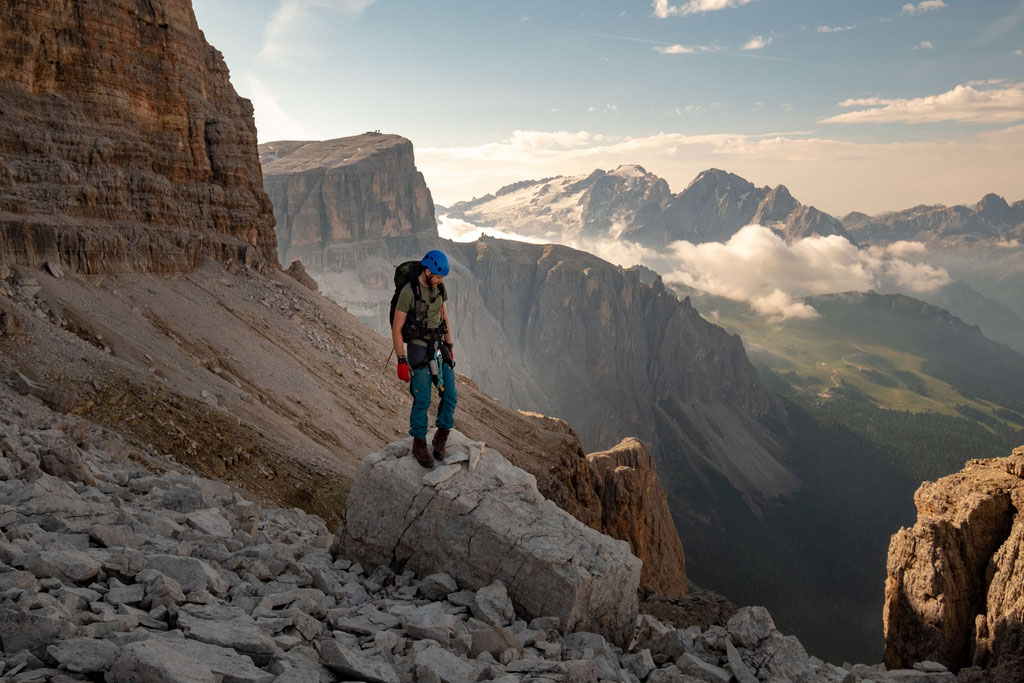 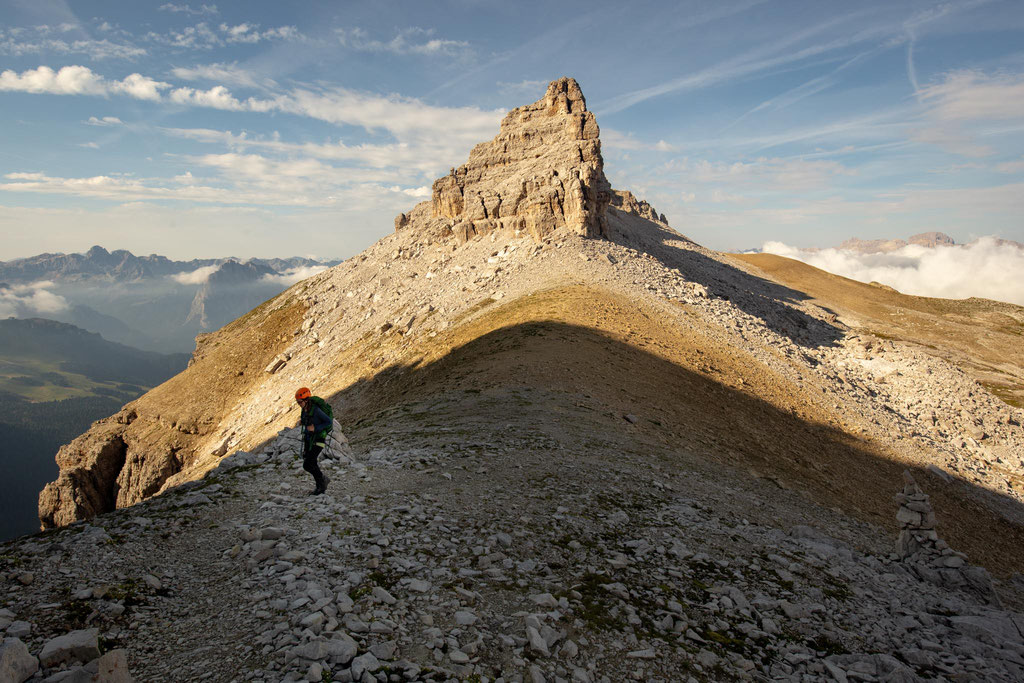 That's it for scrambling! Now it's time to get back to Passo Sella where you started. There is a long descent ahead of you, but the views will make up for it. Take off your via ferrata gear, and store it in your backpack as you won't need it on the descent.

From the summit continue on path 649 for around 45 minutes. For a couple of hundred meters the descent follows the same route as Alta Via 2 - one of the multiday traverses across the Dolomites. In this section paths 649 and path 666 run concurrently for a short while, so don’t be alarmed when you see a sign saying you’re on path 666.

Eventually the path splits and loops round back southward on path 647. I know remembering all these numbers might be overwhelming, so I highly recommend purchasing the Tabacco map nr 05 to visualise the route better.

Once you turn onto pathway 647, it runs across large plateau and is marked with large yellow poles placed there for the numerous high alpine races. The track loses elevation quickly down Plan de Roces in Val Lasties and surrounds you with vertical walls on both sides.

However, these vistas are tough to appreciate after the views of only a few hours ago on the ascent. 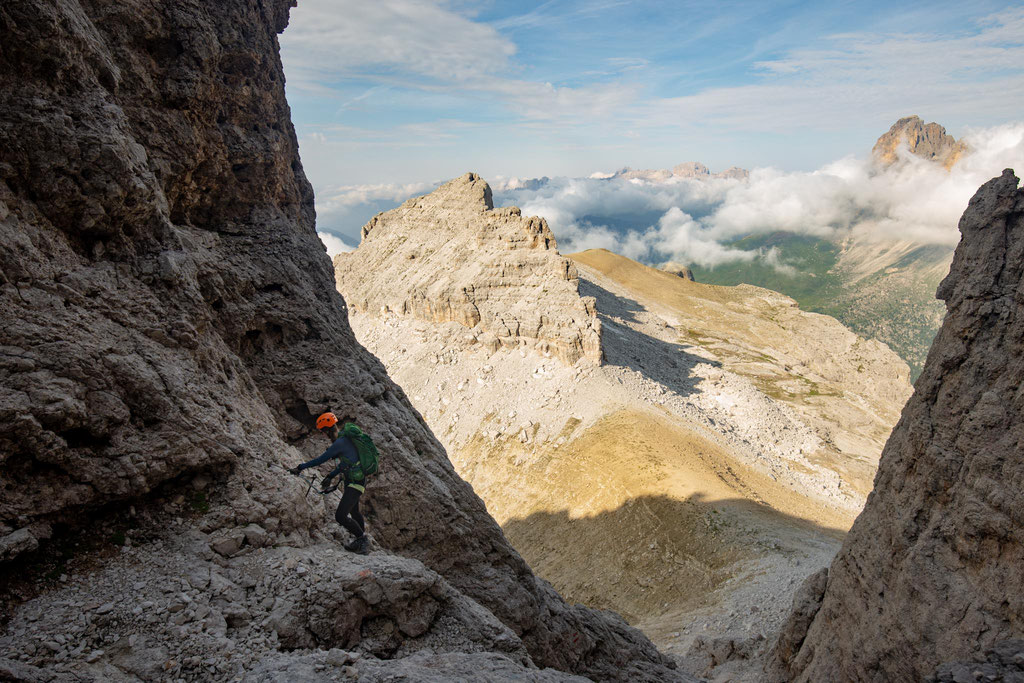 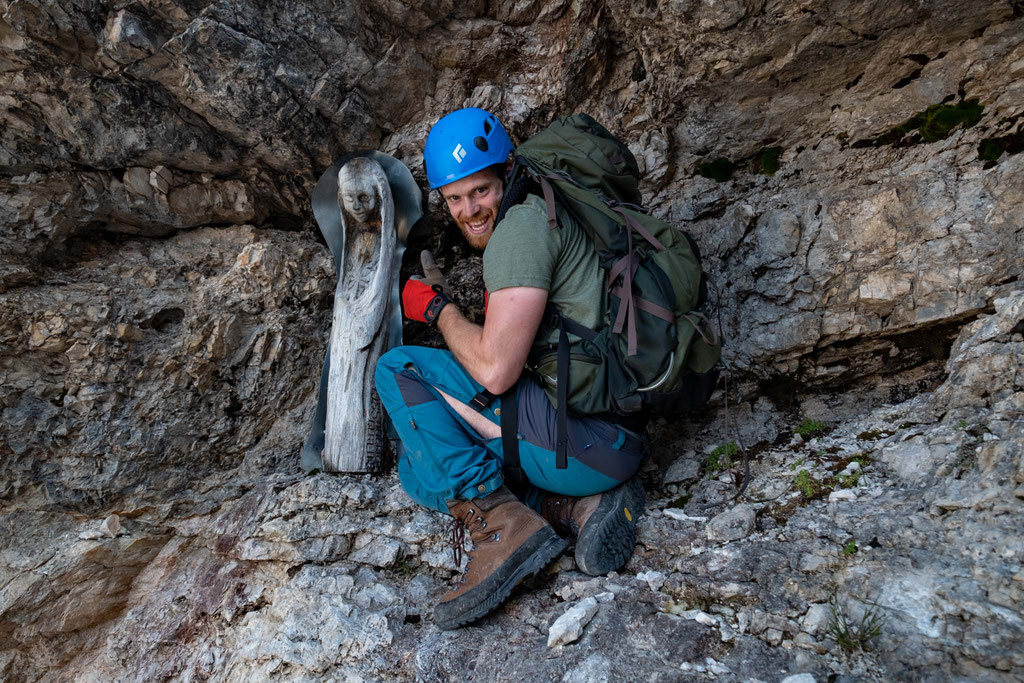 The final intersection gives you a choice of heading quickly to the road SS242 (the same one that runs through Passo Sella) on path number 656 which emerges out at a indistinct hairpin turn.

The downside of this route is that it drops down to 2050 meters and you will have to hike back up to Passo Sella. This might be a bit too tiring after an already long day.

The more logical descent, albeit taking you further away from Passo Sella, continues all the way down on path 647 and emerges out a short walk away from two restaurants, Pian Schiavaneis and Monti Pallidi. This is the perfect location to finish your day, sipping beer and stuffing your face on local cuisine.

You are probably now wondering how to get back to Passo Sella? There’s a bus stop outside the two establishments which will run you back to your vehicle at the pass. No more hiking for today!

The bus runs every 30 minutes in the summer season, at 16 and 46 past the hour (2019). Alternatively, hitchhiking is a great option as every car going passed you is definitely heading over Passo Sella.

Val di Fassa is one of the most popular valleys stretching from the foot of Marmolada - Dolomite's highest mountain.  The two main villages Canazei and Campitello di Fassa offer a fantastic base for exploring the area, including via ferrata Pössnecker.

Below you can find a few of my recommendations for accommodation in the area.

If you have any questions about this ferrata leave them in the comments below. For more routes, photography locations, day hikes and backpacking trips visit my guide to the Italian Dolomites.