Every time I hear a ridgeline in the description of a route, whether it's a hike or via ferrata, I immediately add it to my list. Why you may wonder?  Because they always offer the best views to effort ratio.

So when I first read that via ferrata Sentiero Massimiliano runs along the Terrarossa ridgeline it quickly made its way onto my dolomites adventure bucket list.

Whilst working on my guide to the Dolomites I decided to stay the whole week hiking through the lesser known and quieter Catinaccio/Rosengarten group in the North West part of the Dolomites.

I took the chance to introduce my friend, who was visiting me at the time, to a few via ferratas along the way. I think she had lots of fun, because she already expressed her interest in joining me again next year!

3-4 hours excluding the approach to the hut

Getting to the start of the route

The via ferrata begins directly behind the Rifugio Alpe Di Tires/Tierseralp hütte.

There are a few different paths you can take to reach the rifugio. Below are two quickest.

To better visualise the routes, it's always a good idea to have a hiking map with you. For the via ferrata Sentiero Massimiliano and the hiking routes leading to its start, you will require the Tabacco map nr 05 or 06.

I reached Alpe di Tires hut from rifugio Vajolet (2,5 hours) where I stayed the night before, whilst doing the traverse of the Rosengarten group. This route only makes sense if you are planning a multiday backpacking trip.

I highly recommend an overnight stay in the Alpe di Tires hut when attempting the via ferrata Sentiero Massimiliano. Otherwise you will be looking at a very long day in the mountains (over 10 hours). Don’t forget to book ahead.

After a short but intense 15 minutes you will find yourself enclosed in a narrow gully. Make sure to look back to get a glimpse of the surrounding mountains.

Because the gully stays in shade most of the day, it’s prone to icing. The day I picked for the traverse of the via ferrata Sentiero Massimiliano was only a couple of days after a decent snowfall.

At the start of October the temperatures during daytime are still relatively high, but plummet to below zero at night, melting the snow during the day then freezing it again at night. This was the perfect recipe for some sketchy conditions in a few places, including the gully.

After the gully crossing you will quickly reach a col from where you'll get an aerial view of Alpi Di Siusi - one of the iconic photography spots in the Dolomites.

After a section of cables you will arrive at the first of two summits on today's agenda: The Dente Grande di Terrarossa (2653 metres).

Marmolada's south face - the highest peak in the Dolomites, as well as Catinaccio - the highest summit of the Rosengarten group, which we bagged the day before, are clearly visible from the distance.

You will also get the first clear view of the Terrarossa ridgeline and the Terrarossa peak. So tantalisingly close, yet a fair bit of work away from reaching.

The undulating ridgeline, with intermittent cable protection is fun to tackle and easy to follow. The prominent red paint marks are relatively easy to spot. Of course providing the weather conditions are good.

Not only you are constantly surrounded by jaw dropping vistas everywhere you look, but you don't have to work too hard for them!

The ridgeline traverse shouldn't take longer than 30-40 minutes before you reach the last push to the summit, thankfully cables have been installed in the most difficult sections. Make sure you take full advantage of them. Some parts with big drops on either side can make your head spin!

If for some reason you are not feeling your best, or the weather has turned for worse, this is where you will encounter the escape route back to the rifugio, clearly marked with the "Notausstieg" sign. 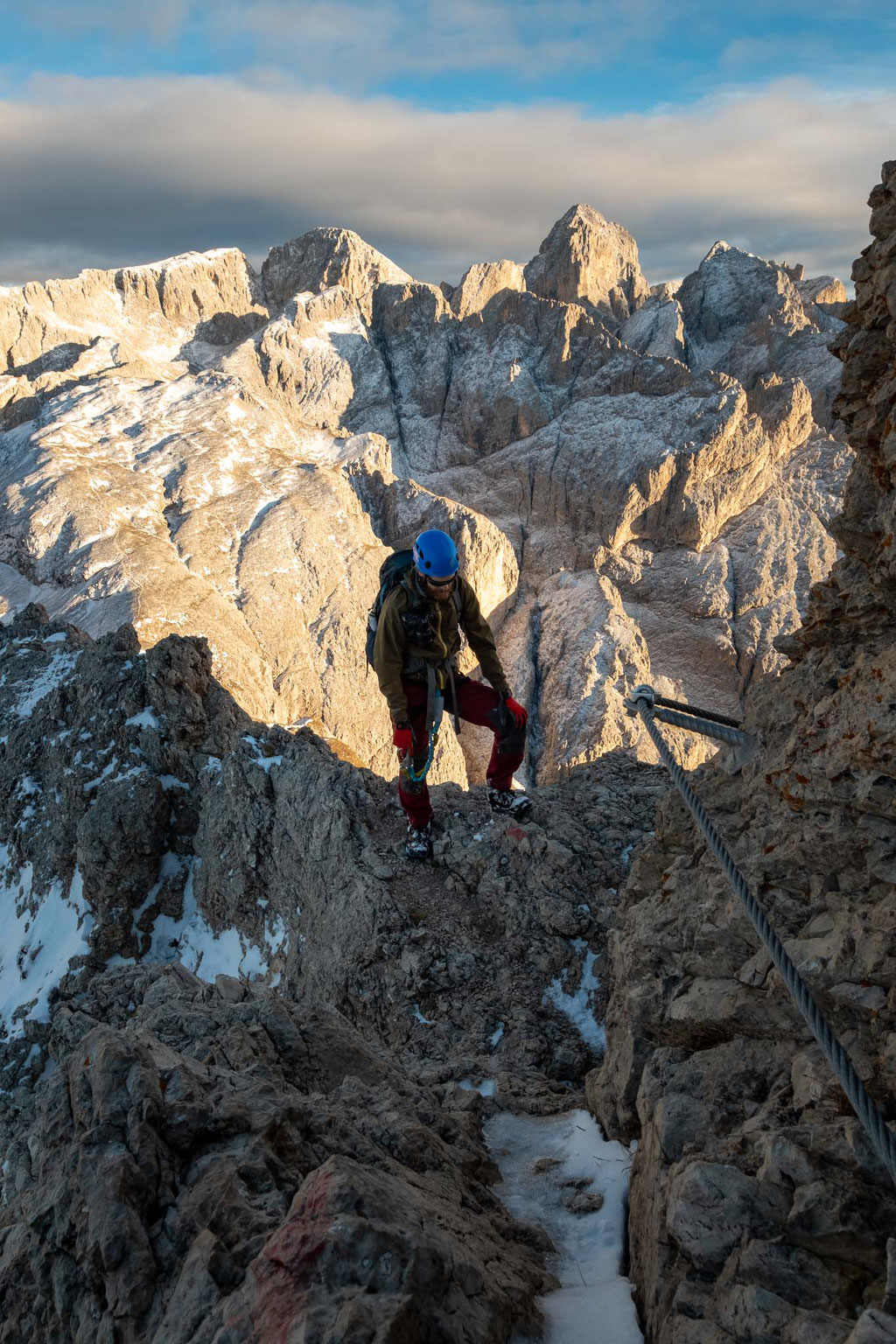 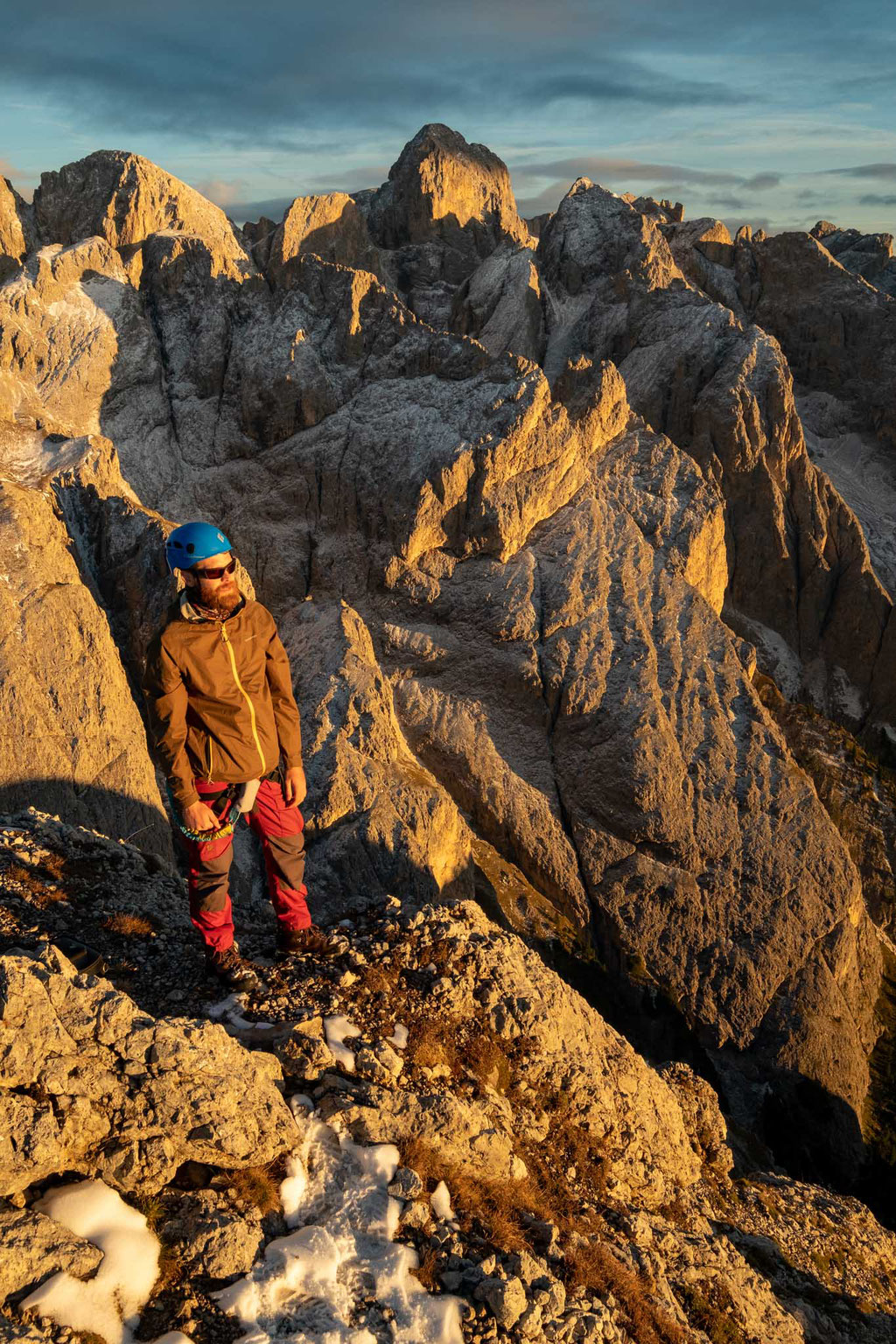 Due to icy conditions along the route, there was more than one time when we thought about turning back, but I've got to admit, I had a little bit of a summit fever. The prospect of returning back after already putting the work into getting to where we stood at, didn't seem too appealing.

In the end we decided to chance it and hope the conditions will improve. Unfortunately as we pushed on icy sections and snow still covered the trail.

My gloves got soaking wet from grabbing onto snow covered rocks and cables. Luckily the summit was now not too far away. After a few more cable sections we were on the top of the Cima de Terrarossa! Happy we made it in one piece just in time for sunset! 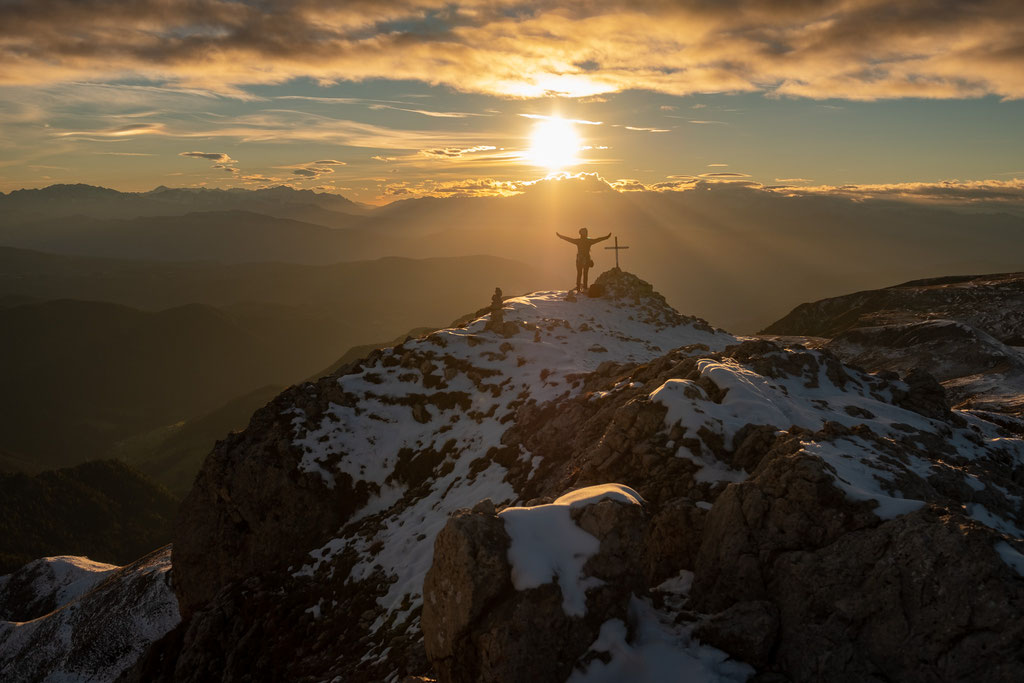 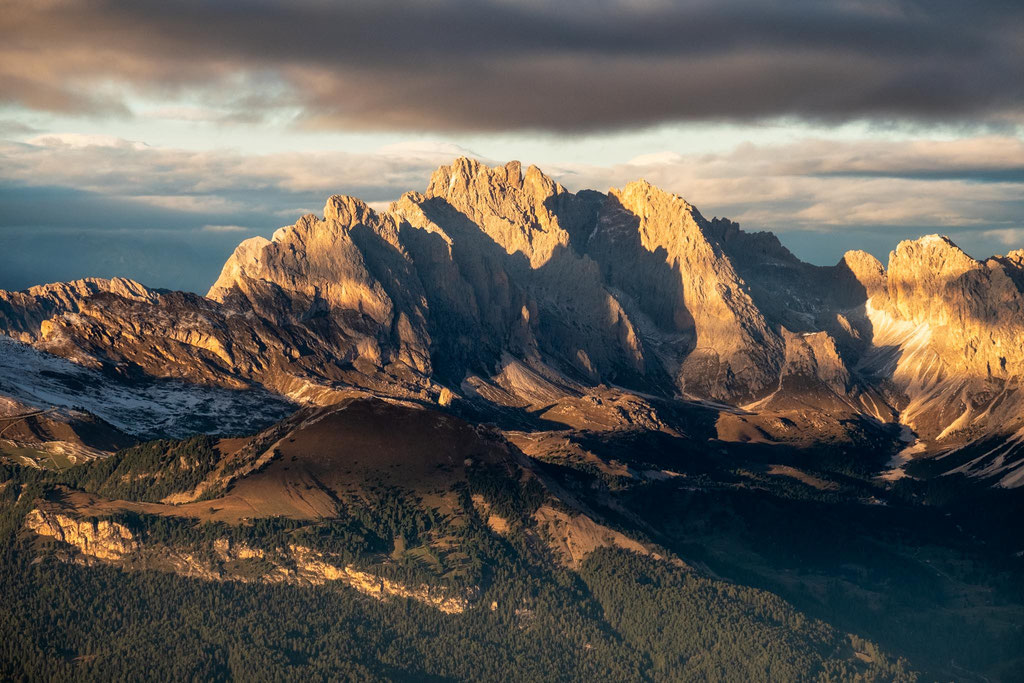 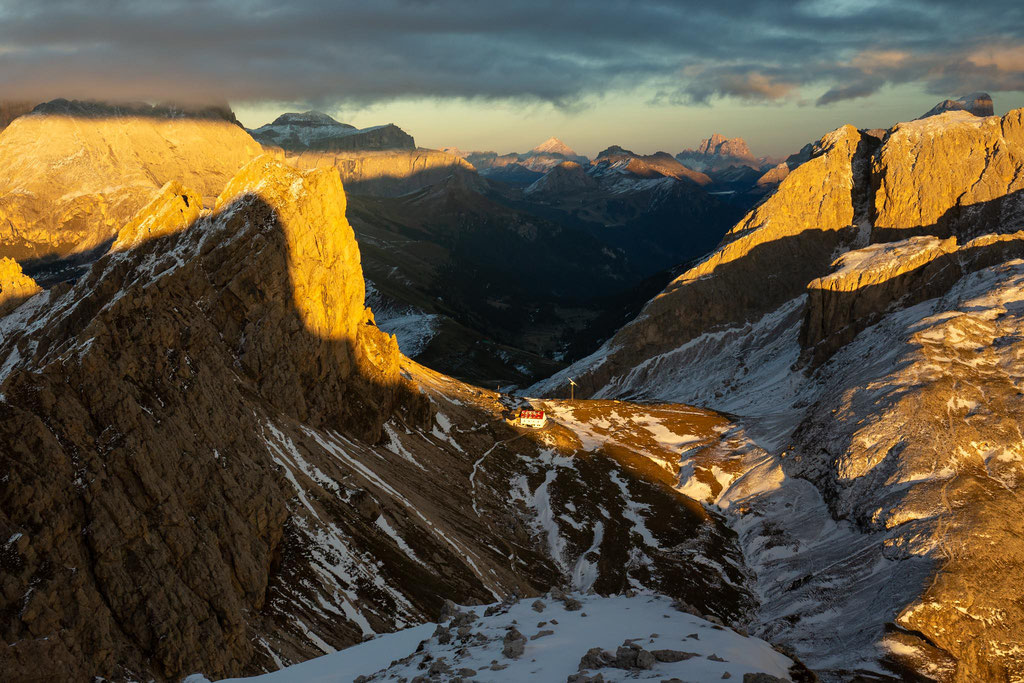 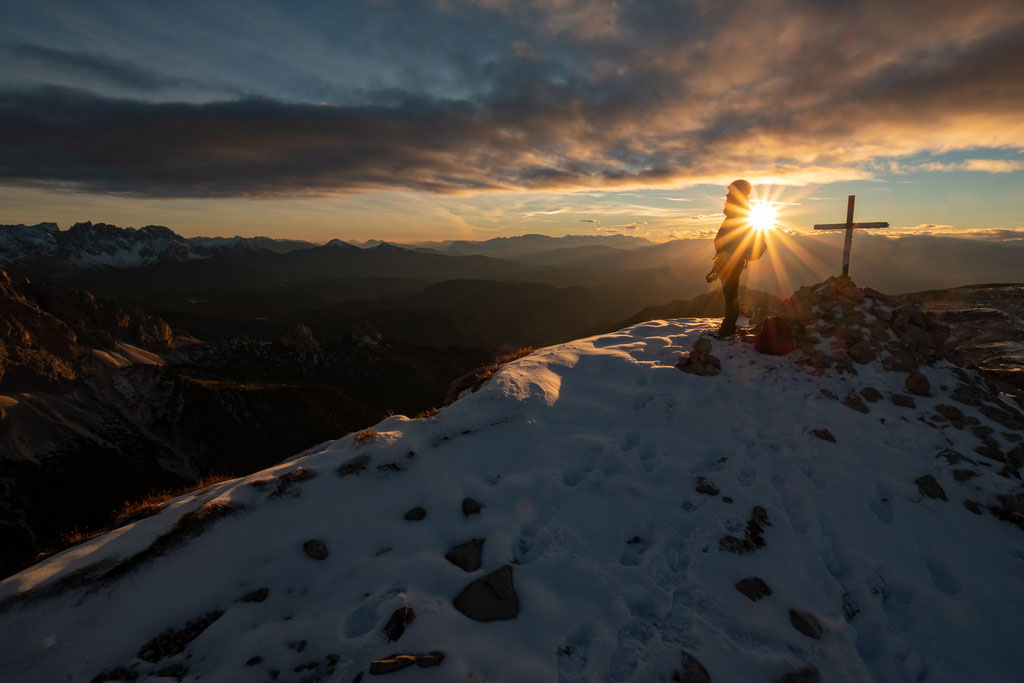 We hung around to watch the sunset then quickly rushed down back to the hut, taking advantage of the last bit of light. The path is visible from the summit, so is the refuge.

45 minutes later we were back at the rifugio drinking hot chocolate and already planning our next via ferrata in a couple of days!

The whole route (excluding the time at the summit) took us 3 hours to complete.

If you have any questions about this via ferrata or would like to share your own experience traversing it, share it in the comments below! I always answer.