After spending a significant amount of time in the heart of the famous Tre Cime National Park in the Italian Dolomites I felt compelled to explore its other corners, especially the eastern one.

Home to the distinct peak Croda Dei Toni (Zwölferkofel) and a few famous via ferrata routes, there is one that grabbed my attention in particular. I found it thanks to the photos I saw online - Strada Degli Alpini.

Via Ferrata Strada Degli Alpini is an incredible traverse underneath the western slopes of Cima Undici. The route is characterised by a long approach, a technically straightforward via ferrata (albeit with lots of cable time) and jaw dropping vistas of Croda Dei Toni accompanying you most of the way.

Via ferrata Strada Degli Alpini is one of my favorite beginner via ferratas in the Dolomites and I'd recommend it to anyone who loves dramatic views!

There is a decent sized paid parking lot (Parkplatz Fischleinbodenhuette) right next to the hotel. The fee is 5 Euros/day and at the time of doing my research (2019) it could only be paid in cash.

Since it's quite a long route there is a possibility to break it up with an overnight stay in either of these three rifugios: Rifugio Comici (Zsigmondyhütte), Rifugio Pian di Cengia (Büllelejochhütte) or Rifugio Carducci.

The last two require a slight detour from the official route. To better visualise it I highly recommend purchasing the Tabacco Map nr 10. A map or a GPS is something you should always have with you when heading out into the mountains.

Sesto (also known as Sexten in German) is a small town in the province of South Tyrol in Northern Italy. It's a great place for exploring some of the wonders of Tre Cime National Park and only 20 minutes away from the famous Lago di Braies. 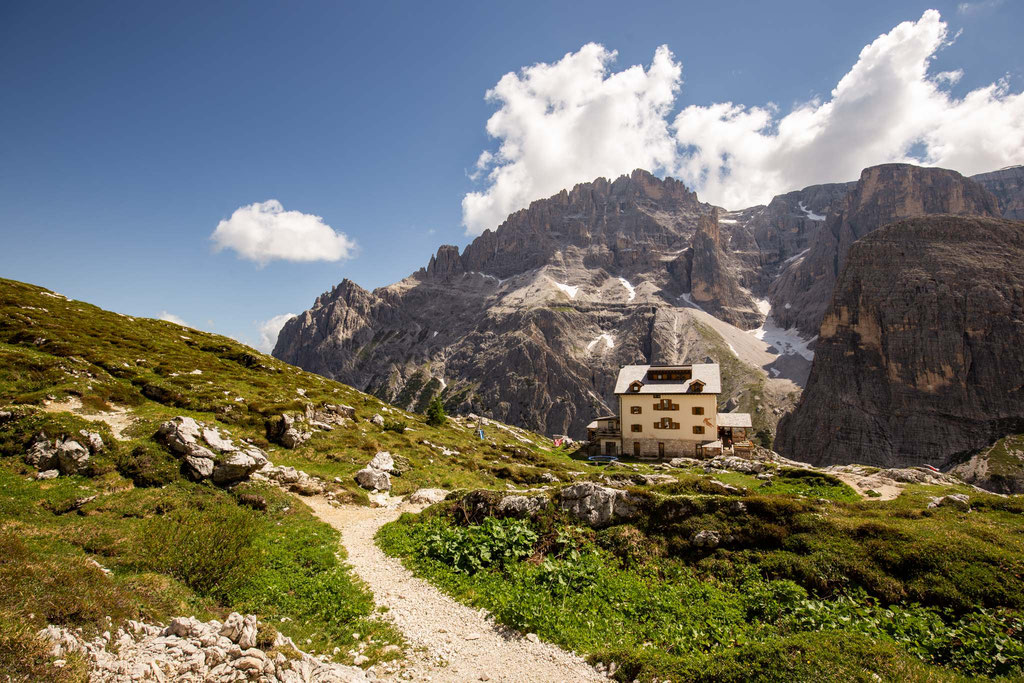 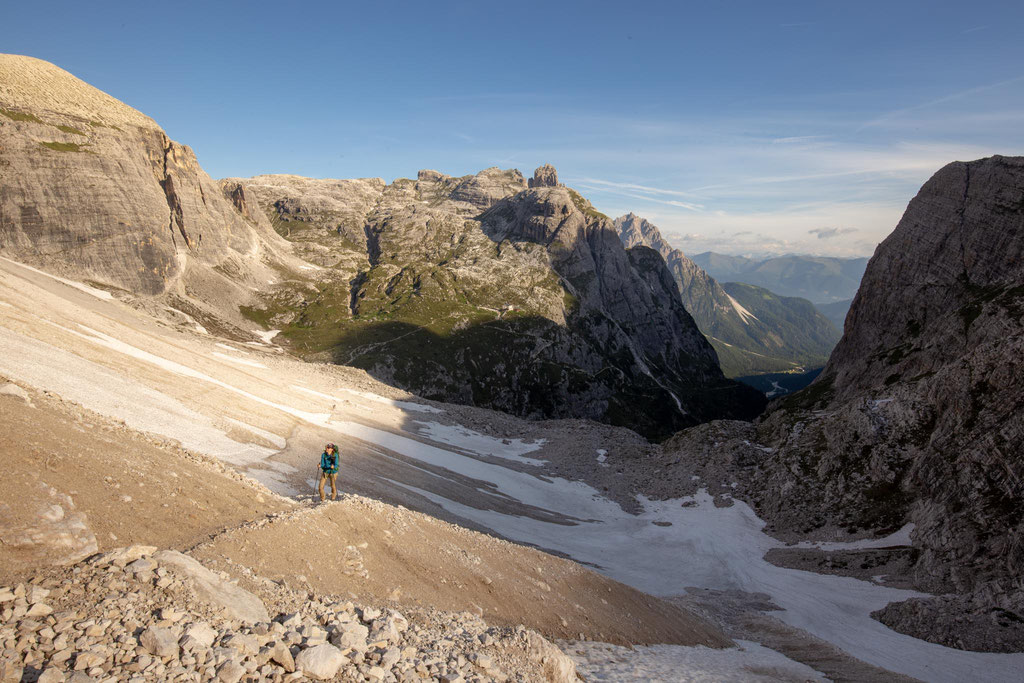 The route starts as a flat jaunt on path nr 102 alongside picturesque fields of wildflowers with scattered horses. In ca 30 minutes, shortly after passing rifugio Fondavalle (Talschlusshütte) the path forks.

Now as you begin to gain elevation via a series of switchbacks, with intermittent protection from the elements, the views back north into the Fiscalina Valley become more prominent and the views in your direction of travel (south) grow in grandeur as the twelve jagged peaks of Croda Dei Toni (Zwölferkofel) become ever closer. 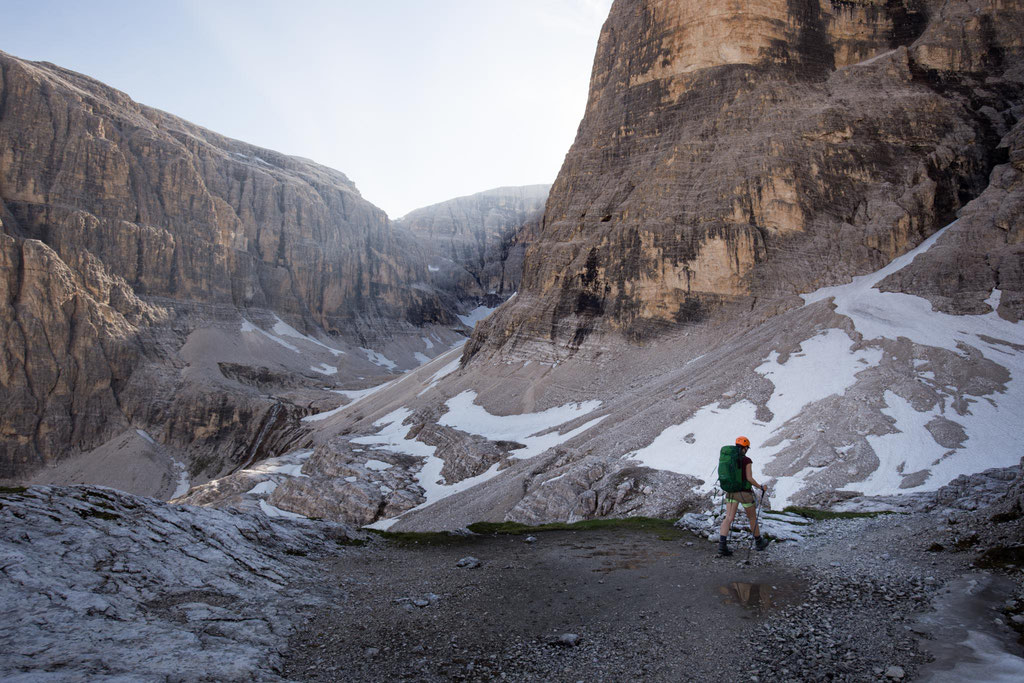 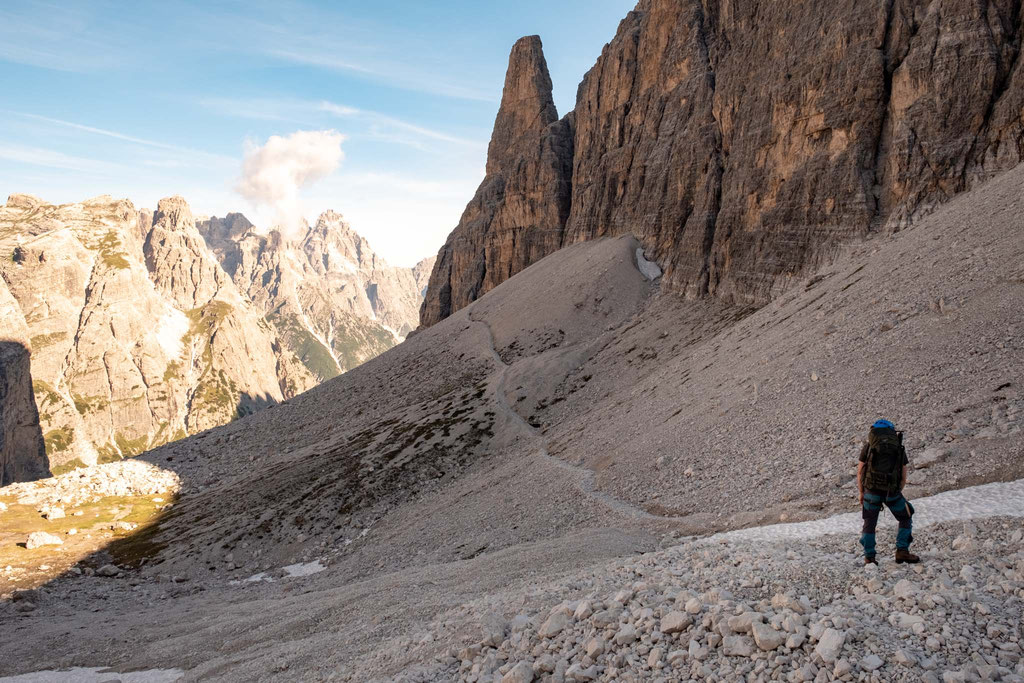 This part of the route is arguably the toughest as it’s where the majority of the elevation is gained. After roughly 3 hours, you will arrive at rifugio Comici (Zsigmondsyhuette), a great place for a longer rest.

The route then continues uphill on a non demanding scree slope directly underneath Croda Dei Toni until a quick pass around the left side of Lago di Ghiacciato (Eissee) and over the La Lista hump, you'll soon be at the start of the cable protection.

The start of the via ferrata is roughly 4 hours from the car park hence why staying in one of the many higher altitude refuges is advised. 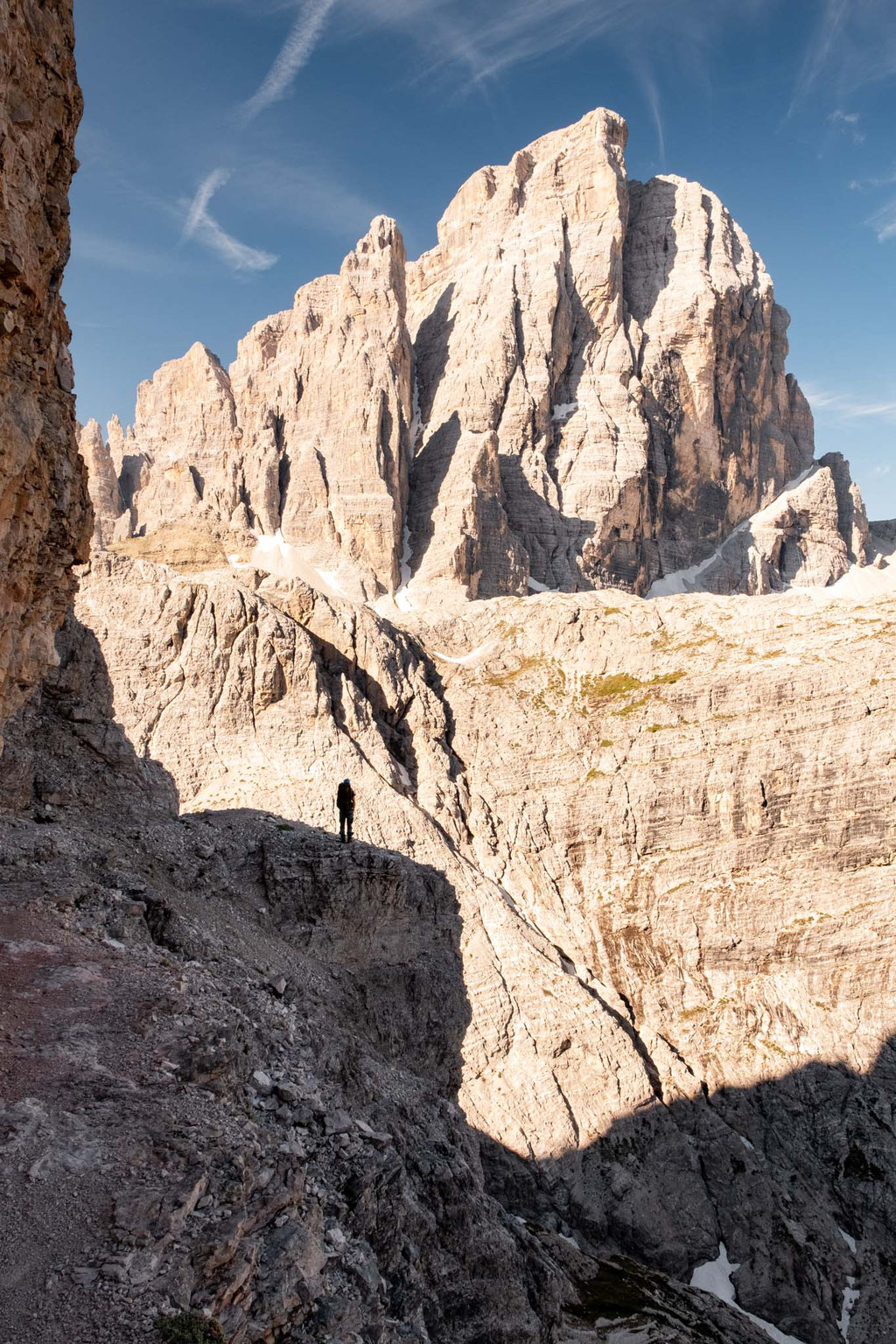 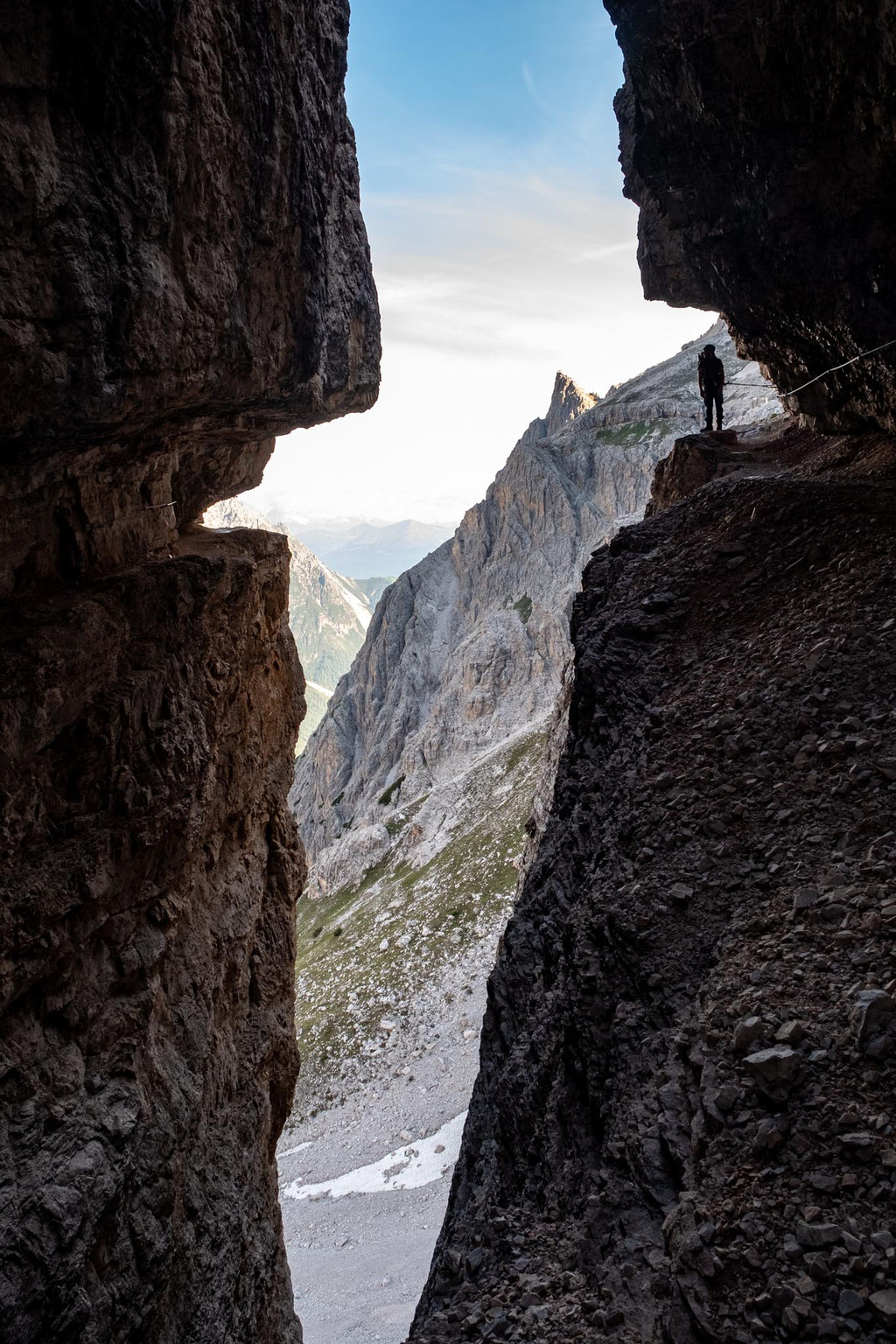 The well-protected route now traverses the western slopes of Cima Undici where the exposure at times is significant but the ‘climbing’ is virtually non-existent.

It's worth noting that the via ferrata section runs parallel (but the opposite way) to the path you have just walked to reach it. You should be able to see it in the valley below.

The majority of this trail is more of a protected hike. It passes under impressive overhangs before a short protected glacial traverse brings you to one of the most spectacular view points, The Ledge of Salvation (photo above right).

Another protected short glacial crossing and several spots where snow lingers late into summer are easily passed before the end of the almost 2km stretch of intermittent cable finishes. A series of manageable scree slopes then take you to the highest point of the route, Forcella Undici. 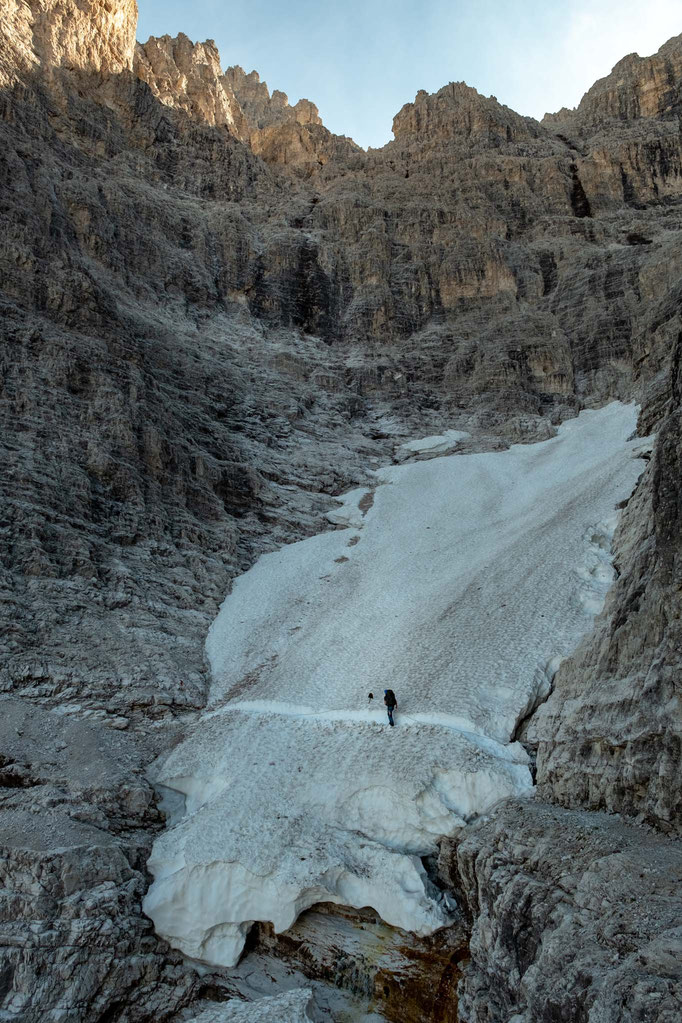 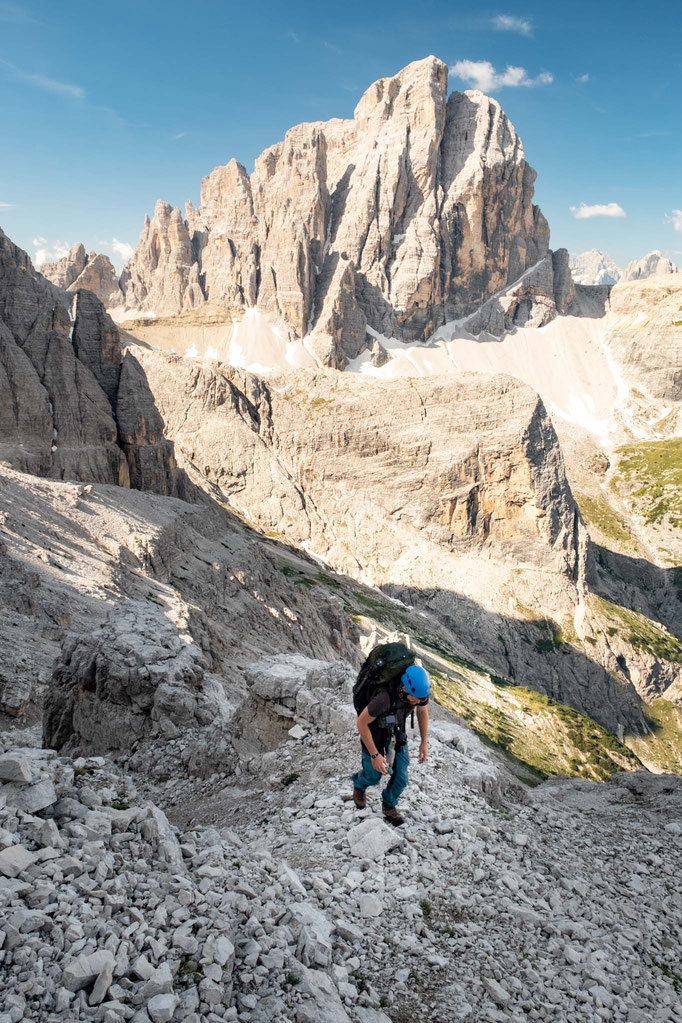 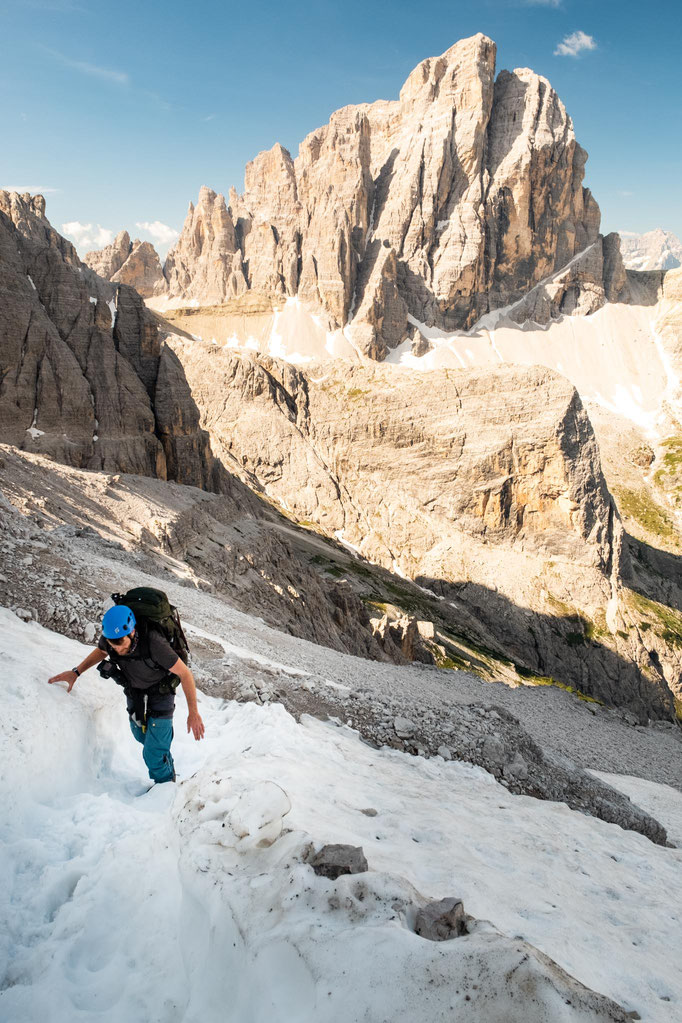 Forcella Undici, isn’t really a Forcella (pass) at all but rather a jot in the ridge that leads up to the peak of Cima Undici (not covered in this article) From here two possible descents are available.

The first is a right turn up to Passo della Sentinella, where more cable protection is provided before a long descent into Vallon di Sentinella.

This way is often impassable due to the amount of snow and ice at Passo della Sentinella. The alternative is a left turn onto path 124 whereby after a short protected downclimb, the route switchbacks steeply down a scree slope quickly losing the majority of elevation gained during the day. Both options then converge again into path nr 100.

Shortly after converging, the quickest return route branches off left again onto path 124 which takes you back below the tree line emerging just north of Hotel Dolomitenhof and a stones throw away from the car park.

I know all this information might be overwhelming, but don't worry. The entire route is marked with white and red paint marks or red arrows. Nevertheless do pack the Tabacco map nr 10. 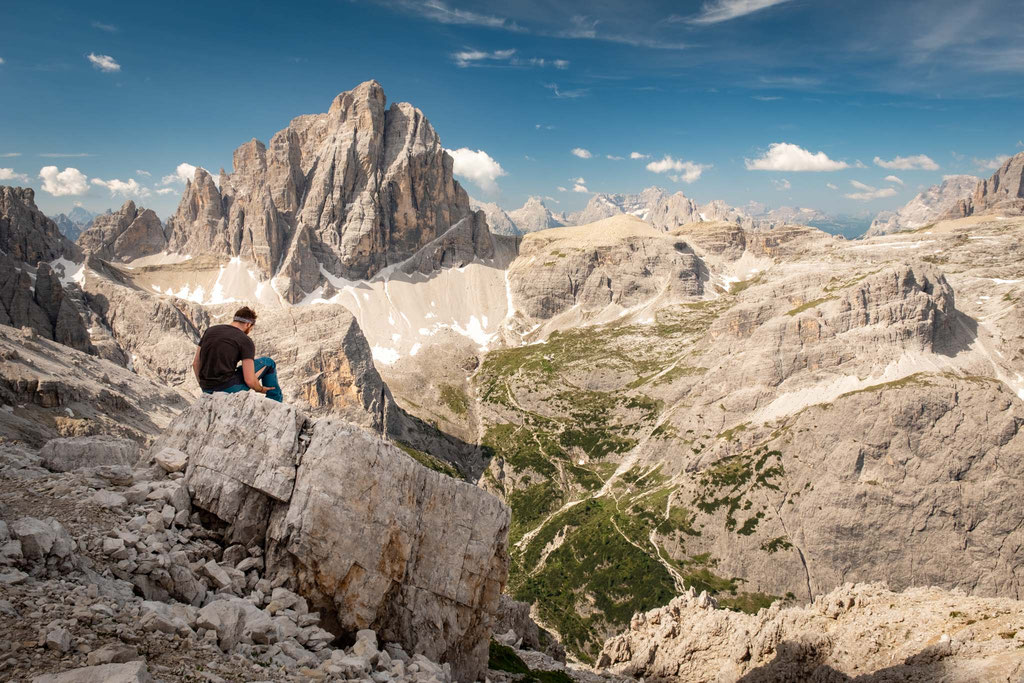 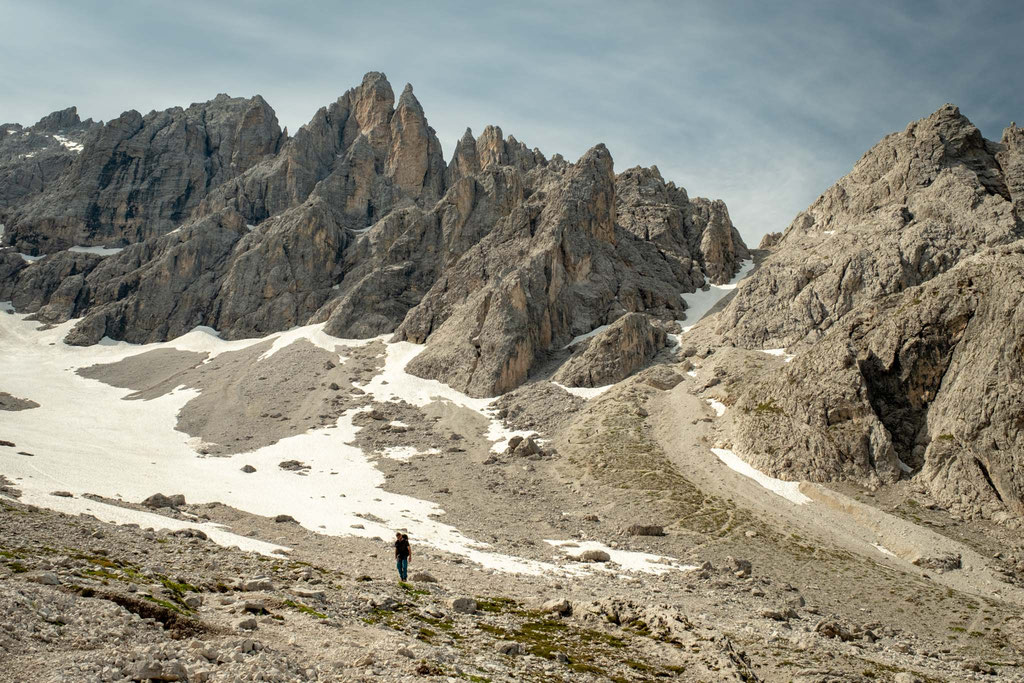 It's also possible to follow the route in reverse to what was described in my article, starting the approach from the top of the Rotwandweissen Gondola near Sesto and ending it at the hotel Dolomitenhof, then catching the bus back to Bagni di Moso where the gondola starts.

The advantage of going clockwise is that you will have the views of Croda dei Toni ahead of you when on the ferrata section.

The major downside however is you being tied down to a gondola and bus schedule. Considering that the whole route takes 10 hours to complete it might not leave you enough time to make it back in time for the bus.

Have you got any questions about this via ferrata? Make sure to comment below! For more routes, day hikes and photography locations visit my Italian Dolomites Guide.

More via ferrata routes in the Italian Dolomites